The sixth and final wife of Henry VIII, Catherine Parr was born in 1512, according to some authorities at Kendal Castle in Cumbria and was the daughter of Sir Thomas Parr and Maud Green. Maud Green had served as a lady-in-waiting to Henry VIII's first wife. Catherine of Aragon and named her daughter after her mistress, who stood as godmother to the child.

Sir Thomas Parr was a companion in arms to the young Henry VIII and had been present at the Battle of the Spurs in 1513. Catherine had two siblings William and Anne. The Parrs were an influential northern aristocratic family and in common with all the wives of Henry VIII, she could claim royal descent. Catherine descended through the powerful northern family, the Nevilles, to the Beauforts, illegitimate descendants of Edward III's fourth son, John of Gaunt, Duke of Lancaster. 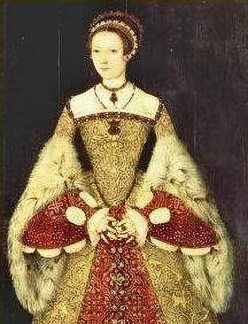 Her father Thomas Parr died in November 1517, leaving his children to be brought up by their mother. Catherine received an excellent education and became fluent in French, Latin and Italian. At the age of around fifteen, she was married to Edward, Lord Borough, the son of Thomas, Lord Borough, who had been chamberlain to Anne Boleyn.

Following the death of her first husband, Catherine was married for a second time at around the age of twenty-one, to the elderly John Neville, 3rd Baron Latimer, of Snape Castle. Lord Latimer had been married twice previously and had two children, a son and a daughter, to whom Catherine became an admirable stepmother.

Her second husband died in 1543, leaving Catherine well provided for. No issue resulted from either marriage.

Following the death of Lord Latimer, Catherine attracted the eye of Thomas Seymour, the brother of Jane Seymour, but when the king expressed an interest in her she was obliged to accept his proposal. The marriage of Henry VIII and Catherine Parr took place on 12 July 1543 at Hampton Court Palace, both the king's daughters and his niece, Lady Margaret Douglas attended the ceremony. 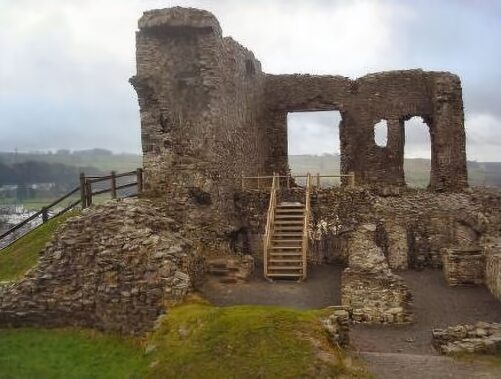 Henry VIII, now a grotesquely bloated remnant of the vibrant and athletic young man who inherited the English throne in 1509, was ageing fast and in failing health. He suffered from a suppurating ulcer on his leg, which was extremely painful and had become vastly overweight.

The new queen was a tall woman with auburn hair, she was not considered to be beautiful and contemporary descriptions describe her as 'pleasing' 'kind' and 'gracious'. Henry's fourth wife, Anne of Cleves exclaimed in surprise when she heard of their impending wedding that Catherine was 'not nearly as beautiful as she'. She described the king as 'so stout that three of the biggest men that could be found could get inside his doublet.'

Catherine made efforts to foster good relationships with Henry's three children from his previous marriages, Mary, Elizabeth and Edward. She took a lively interest in their education and brought them to court attempting to create a family life for them, which had been conspicuously absent before her arrival. As a mark of Henry's trust in her considerable abilities, she was appointed in the position of regent of England when he embarked on his last campaign to France.

The Queen produced several written works, 'Prayers and Meditations' which was an anthology was published in November 1545, and received enthusiastic comments from the scholars of the day. Her second book, 'The Lamentations of a Sinner,' discussing Christian behaviour, commented that married women 'learn of St. Paul to be obedient to their husbands'.

As the king visibly declined, the Catholic and Protestant factions struggled to obtain power during the long minority reign which would inevitably follow. Attempts were made to bring about the demise of the Queen, who had strongly Protestant sympathies and was not reluctant to eagerly expound her religious beliefs to her husband. Catherine's enemies pounced and a Bill of Articles, outlining her supposed heresies, was drawn up.

Catherine was forewarned of the danger and understandably terrified by the fate of her predecessors, threw herself on her husband's mercy. Henry accepted a highly flattering explanation from her. When her enemies came the next day to arrest her, Chancellor Wriothesley was set upon by the King. 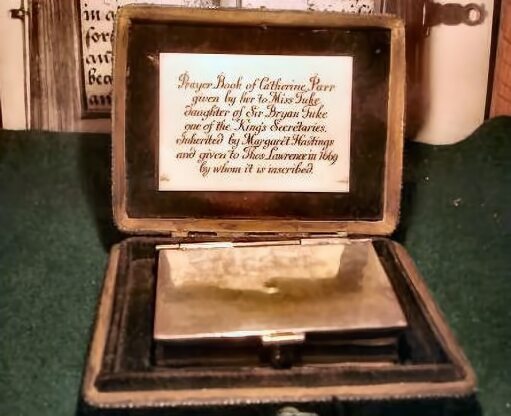 After the death of her formidable third husband on 28 January 1547, Catherine retired from court following the coronation of her stepson, Edward VI, on 31 January 1547, to her home at Old Manor in Chelsea. But six months after the death of King Henry VIII, Catherine was secretly married to Thomas, Baron Seymour of Sudeley and Lord High Admiral. Neither King Edward VI or his council were informed of the marriage for several months.

In 1548, Catherine invited her step-daughter, Lady Elizabeth and her cousin, Lady Jane Grey, daughter of the Duke and Duchess of Suffolk, to stay in the couple's household at Sudeley Castle in Gloucestershire. Thomas Seymour was later alleged to have made advances to Catherine's stepdaughter, Lady Elizabeth, while was residing in Catherine's household and was suspected to have been planning to increase his influence by a marriage to her. Seymour abused his position as Elizabeth's stepfather terribly. Engaging in "romps" with her, tickling her and jumping on her bed in the early morning. On one occasion he slashed her dress with a sword. 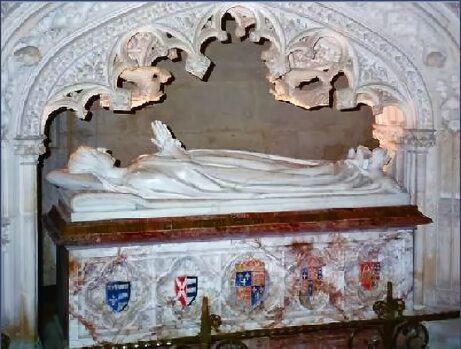 Her former marriages having produced no issue and widely believed to be barren, Catherine became pregnant at the age of thirty-five. She gave birth to a daughter, named Mary Seymour, on 30 August 1548.

Catherine died of puerperal fever six days later, on 5 September 1548, at Sudeley Castle in Gloucestershire, and was buried in St. Mary's Church, next to the castle. Lady Jane Grey acted as chief mourner at the funeral.

Thomas Seymour was later executed on a charge of high treason by his brother the Lord Protector Somerset and his property forfeit to the crown. Catherine's young daughter Mary was taken into the household of Catherine's friend, Catherine Willoughby, the dowager Duchess of Suffolk, but sadly is thought to have died soon after her second birthday.

The remains of Catherine Parr were not allowed to rest in peace. Sudeley Castle became a royalist stronghold in the English Civil War and was later left in a ruinous state on the orders of Parliament. Queen Catherine's coffin was discovered in the ruins of the chapel in 1782 by Mr John Lucas. He opened the coffin and observed that the body, after 234 years, was 'uncorrupted'. After helping himself to a few locks of her hair, and in 1792 it was reinterred upside down by a party of drunken men.

The coffin was officially reopened by the Rector of Sudeley in 1817, now overgrown with ivy, nothing but a skeleton remained. At the restoration of the chapel, her remains were again moved and an altarpiece was erected at the north side of the sacrarium to her memory, which includes a marble effigy of Catherine, rendered as lifelike as possible by use of her surviving portraits.