Jane Seymour, the mother of Henry VIII's only surviving legitimate son, King Edward VI, was the daughter of Sir John Seymour and Margery Wentworth, daughter of Sir John Wentworth, of Nettlestead, in Suffolk and was born at Wulf Hall in Savernake Forest, Wiltshire. Her exact date of birth is not known, but it is believed to have occurred between 1507-1508.

Jane was the eldest of a large family of children. The Seymour's were a well-respected gentry family, who rose to prominence at the court of Henry VIII. The surname is thought to derive from a corruption of the St. Maur family of France who originated either at St. Maur des Fossées, near Paris, or St.Maur sur Loire, at least one member of the family came over to England with Wiliam the Conqueror. 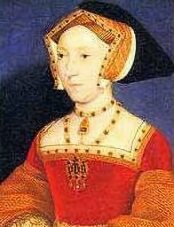 Jane's father, Sir John Seymour, served in Henry VIII's French campaign of 1513 and accompanied the king to the Field of the Cloth of Gold in 1520. He was made a knight of the body and later a gentleman of the king's bed-chamber.

Through her mother Margaret Wentworth, Jane could claim a royal descent. One of her ancestors was Elizabeth Mortimer, the granddaughter of Lionel of Antwerp, Duke of Clarence, third surviving son of Edward III and Phillipa of Hainault. Elizabeth Mortimer had married the famous Harry 'Hotspur' Percy, who was killed at the Battle of Shrewsbury by King Henry IV. Hotspur and Elizabeth Mortimer were to become the grandparents of Jane's maternal grandfather, Sir Henry Wentworth. Margery Wentworth was also the first cousin of Elizabeth and Edmund Howard, the parents of Anne Boleyn and Catherine Howard.

In her youth, Jane was betrothed to William Dormer, son of the wealthy Sir Robert and Lady Dormer. Lady Dormer, however, felt that Jane's social status was not sufficient for her son and the engagement was broken off.

Jane Seymour had first come to court as a lady-in-waiting to Catherine of Aragon and later fulfilled the same post to Anne Boleyn. She was of fair complexion, had a pointed chin and was of medium height, modest and gentle natured. A contemporary described her as:-

'She is of middle height and nobody thinks she has much beauty. Her complexion is so whitish that she may be called rather pale.'

Never an acknowledged beauty, Perhaps Jane's attraction for Henry VIII grew from the fact that she was the very antithesis of the dark, argumentative and voluble Anne Boleyn.

As Henry VIII tired of heated arguments with the strong-willed Anne he was drawn to the gentle and submissive Jane. Henry stayed at Wulf Hall in the September of 1535, and it may have been there that he first became attracted to Jane. In any event, Henry's growing affection for Jane soon came to the notice of Anne Boleyn, and a rivalry developed between the Queen and her maid. When Anne noticed a jewel that Jane wore, containing a portrait of the King, which had been presented by Henry, she snatched it jealously from her neck. Queen Anne was not of a nature to bear such insults patiently, but Jane's star was in the ascendant, Anne's in decline.

During Henry VIIII's courtship of Jane, she was advised by one of the leaders of the conservative Catholic faction at court, Sir Nicholas Carew, who coached her in the intricacies of religious politics. The recent death of Catherine of Aragon had rendered it possible for Henry to be rid of Anne without anticipating the prospect of again being married to Catherine. Ironically, while Catherine had lived, Anne remained safe in her position, Anne herself had long recognised the fact, declaring "she is my death and I am hers".

Anne was arrested and tried on a trumped-up charge of treason, for adultery with five men including her own brother. It is unlikely that the charges against her had any basis in fact. A court controlled by Henry and presided over by Anne's uncle, the Duke of Norfolk, pronounced her guilty. Anne was sentenced to be burned or beheaded at the King's pleasure. Anne was beheaded at the Tower of London on 19th May, 1536. Henry and Jane were then duly betrothed on 20 May, 1536, and married on 30 May. Jane, who adopted the motto 'bound to obey and serve' was never crowned. 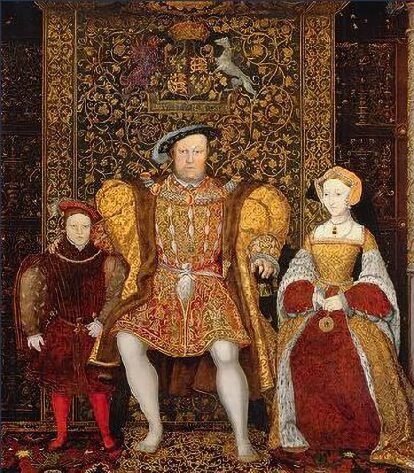 Once married to Henry, Jane attempted to mend the rift between himself and Catherine of Aragon's daughter, Mary, of whom she grew fond. Jane involved herself in state affairs only once, in 1536, when she asked for clemency for the participants in the Pilgrimage of Grace rebellion, her husband reacted by reminding her of the fate of other queens when they had meddled in his affairs. 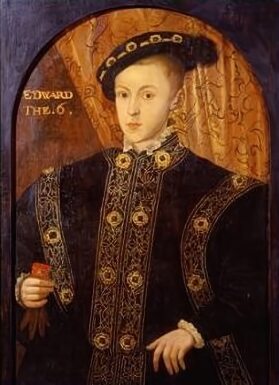 The birth of an heir

In early 1537, after seven months of marriage, Jane announced herself pregnant. Great care was taken throughout the pregnancy and the king was to prove himself indulgent to her every whim. Throughout the last months of Jane's pregnancy, churches across the country prayed for the queen's safe delivery. After a difficult and protracted labour, Jane fulfilled the first duty of a queen and gave birth to a son, the future Edward VI on 12 October 1537 at Hampton Court Palace.

Edward's christening in the chapel royal at Hampton Court was a long and elaborate ceremony followed by a grand reception for nearly four hundred guests. His arrival on the Vigil of St. Edward the Confessor decided the Prince's name and his elder sister, Mary, stood as the child's godmother, his other sister, Elizabeth also took part. Jane also participated, although she had to be carried into the chapel on a portable bed.

Jane was never to see her son grow up, she contracted puerperal fever (or childbed fever) infection of the uterus following childbirth, and died in her sleep twelve days later, on October 24th. Henry VIII is reported to have mourned the loss of his third wife sincerely, she was accorded a magnificent state funeral at which Princess Mary, Henry's elder daughter who Jane had done much to reconcile with her father, acted as a chief mourner. Queen Jane was interred at St. George's Chapel, Windsor Castle.

When Henry died in 1547, he requested that he be buried at Windsor with Jane, his best-loved wife. He was succeeded by Jane's son King Edward VI, died at the age of fifteen on July 6th, 1553 after reigning for six and a half years.