Edward VI, the only legitimate son of Henry VIII by his third wife, Jane Seymour, was born at Hampton Court Palace, after a difficult and protracted labour, on 12th October, 1537.

Edward's christening in the chapel royal at Hampton Court was a long and elaborate ceremony followed by a grand reception for nearly four hundred guests. His arrival on the Vigil of St. Edward the Confessor decided the Prince's name and his elder sister, the Lady Mary, stood as the child's godmother, his other sister, the four-year-old Lady Elizabeth also took part, carrying the chrisom. His mother Queen Jane Seymour also participated although she had to be carried into the chapel on a portable bed. 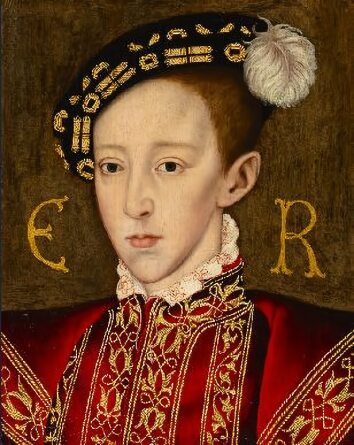 Edward was never to know his mother, Jane Seymour contracted puerperal fever (or childbed fever) an infection of the uterus following childbirth and died twelve days later, on October 24th. Henry VIII is reported to have mourned the loss of his third wife sincerely, she was accorded a magnificent state funeral at which the Lady Mary, Henry's elder daughter who Jane had done much to reconcile with her father, acted as a chief mourner. Queen Jane was interred at St. George's Chapel, Windsor Castle.

Edward was appointed a nurse, Mother Jack, to care for him, at four years old he contracted a quartan fever, the effects of which gripped him for months, but he eventually made a recovery. Despite occasional illnesses and poor eyesight, he enjoyed generally good health and was described as a tall and merry child. Edward was initially placed in the care of Margaret Bryan, and at the age of six the young Prince was appointed his first tutor. He grew to be extremely fond of his last stepmother, Catherine Parr, who took a lively interest in all of her husband's children from his previous marriages and provided a home life for them, which had been conspicuously lacking in Edward's life before her arrival.

The future Edward VI was a precocious and highly intelligent child, he was sparely built, but in most of his surviving portraits adopts the stance of his formidable father. Edward had the red hair of the Tudors and had one shoulder somewhat higher than the other, possibly a result of his difficult delivery. He quickly became proficient in Latin, Greek and French. Like all the Tudors, he was fond of music and played

On 1 July 1543, Henry VIII signed the Treaty of Greenwich with the Scots, sealing the peace with Edward's betrothal to his seven-month-old cousin, Mary, Queen of Scots. The Scots were in a weak bargaining position after their defeat at Solway Moss the previous November, and Henry, seeking to unite the two realms, stipulated that Mary be handed over to him to be brought up in England. When the Scots repudiated the treaty in December 1543 and renewed their alliance with France, Henry was furious. In April 1544, he ordered Edward's uncle, Edward Seymour, Earl of Hertford, to invade Scotland and "put all to fire and sword, burn Edinburgh town, so razed and defaced when you have sacked and gotten what ye can of it, as there may remain forever a perpetual memory of the vengeance of God lightened upon (them) for their falsehood and disloyalty". Edward Seymour responded with the most savage campaign ever launched by the English against the Scots. The war, which continued into Edward's reign, has become known as "The Rough Wooing".

Edward became King of England at nine years old, in January 1547. The child was much distressed to hear of his father's death and he and his sister Elizabeth clung to each other weeping when the ominous news was relayed to them. His coronation took place on 19th February 1547 and was performed by Archbishop Cramner. The lavish ceremonials were reduced to only seven hours, due to the new king's youth. 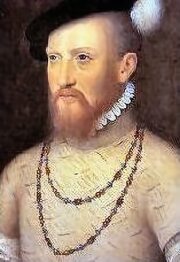 Henry VIII's will had decreed the kingdom was to be in the control of a Council of Regency during his son's minority. King Edward's ambitious maternal uncle, Edward Seymour, Earl of Hertford, however, gained control, Hertford was made Lord Protector and later Duke of Somerset. 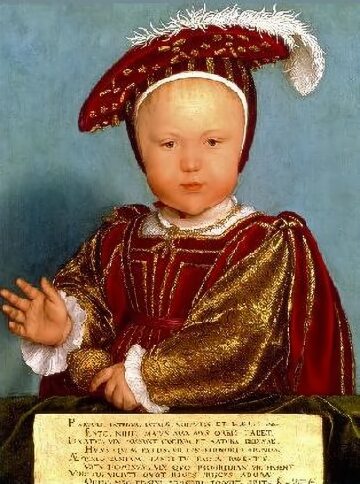 Somerset, in common with his young nephew, was an ardent Protestant. The use of English was enforced in church services by the introduction of the Book of Common Prayer. The heresy laws of Henry VIII were repealed. In Cornwall, these changes produced simmering ill-feeling, which boiled into rebellion, the uprising was put down with severity.

Somerset lead an army into Scotland and defeated the Scots at the Battle of Pinkie Cleugh on 10th September 1547. A further expedition was launched, burning and plundering all before it in the hope of forcing the Scots to hand over Mary, this "rough wooing" had an adverse effect on English marriage plans, the six-year-old Queen of Scots was smuggled out of the country to France, where in August 1548, she was married to the Dauphin Francis, son of King Henry II of France.

The young King himself seems to have been a bigoted Protestant who was intensely interested in theology. He complained that his uncle, the Protector, kept him short of money. Edward's other maternal uncle, Thomas Seymour, the Lord Admiral, an ambitious and reckless man who had married Edward's step-mother, Catherine Parr, with unseemly haste after the death of Henry VIII, plotted to gain power with his nephew and Somerset was forced to send his brother to the block on a charge of high treason.

The Duke of Somerset was ousted from office in 1549 by John Dudley, Earl of Warwick, who became Duke of Northumberland in 1551. Somerset followed his brother to the block on a charge of treason, the young Edward noted coldly in his diary- "the duke of Somerset had his head cut off upon Tower Hill between eight and nine o'clock in the morning". Northumberland ingratiated himself with the impressionable young King and acquired a dominating influence over him.

The highly religious Edward strongly disapproved of his elder sister Mary's ardent Catholicism. At the age of ten, he had written to their step-mother, Catherine Parr, urging her to influence Mary to give up foreign dances and merriments, which "did not become a Christian princess" When summoned to London to answer for her transgressions in continuing attendance at the Catholic mass, she told Edward that she would sooner he took away her life than her religion, he indignantly replied with irritation that he "required no such sacrifice." Mary responded by lecturing the King in front of his council "Riper age and experience will teach Your Majesty much more yet," Edward, embarrassed, responded sharply " You also may have somewhat to learn, none are too old for that."

Mary was summoned to appear before the council again on the matter of her attendance at mass and entered London with a large retinue of retainers. Her powerful maternal cousin, Charles V, King of Spain and Holy Roman Emperor, threatened war on England in support of Mary. In the ensuing debate with his council, Edward, who adopted a defiant attitude to the Emperor's threats were humiliatingly overruled, for which he shed bitter tears. Mary's victory was fated not to last, the French alliance was strengthened, after which the council proceeded to move against her. She and her household were deprived of the mass but defiantly continued to practice it in secret.

The Death of Edward VI

King Edward fell ill in April 1552, of a combination of measles and smallpox. Later in the year, he began to exhibit signs of tuberculosis or consumption as it was known at the time. By June it was obvious that the King was unlikely to survive. It is now known that the measles virus suppresses host immunity to tuberculosis. The unscrupulous Northumberland, fearing for his political survival under Edward's successor, the fanatically Catholic Mary, influenced the impressionable young King to disinherit both his sisters in favour of his cousin Lady Jane Grey.

Lady Jane was the granddaughter of Henry VIII's younger sister, Mary and was conveniently married to Northumberland's son, Guildford Dudley. To allow time for his plans to progress, the Protector dismissed Edward's doctors and installed a female to administer to the dying king. Her 'restringents' brought on a temporary improvement but probably slowly poisoned him through the levels of arsenic they contained. Edward's sufferings reached a pitch where they became intolerable, he was heard to whisper to his tutor "I am glad to die." His legs and arms swelled and his skin darkened, while his fingers and toes became gangrenous, he also lost his hair and nails.

On July 6th, 1553, during the close atmosphere of a violent thunderstorm, which rumour said was the spectre of Henry VIII, stamping his feet in characteristic fury and venting his wrath at the extinction of his dynasty, King Edward VI died in agony, crying out with pathos "I am faint, Lord, have mercy upon me, take my spirit.".

News of the King's death was not released until 10th July to allow Northumberland time to bring his plans to fruition and establish his daughter-in-law on England's throne. Edward's body lay unburied until August 8th, when it was interred in the Henry VII Chapel at Westminster Abbey under Protestant rites by his eventual successor, his sister Mary I. The service was carried out by his godfather, Thomas Cramner. Mary had wanted to give her half-brother a Catholic funeral but was persuaded against it, instead, while the Protestant service was taking place, she had masses said for the soul of her young brother at the Tower.