Queen Mary I, or 'Bloody Mary' as she became known, the first Queen Regnant in English history, was born on 18th February, 1516 at the Palace of Placentia at Greenwich, the only surviving and fifth child of Henry VIII and his first wife, Catherine of Aragon. Mary grew to be a small, slight, woman with auburn hair, proud of her Spanish blood and like most of her family, fond of music. 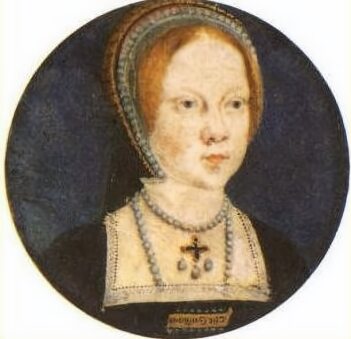 Mary in her youth

Mary had very poor eyesight, being extremely short-sighted and suffered from poor health as a child, she was often ill with headaches and sinus conditions. Margaret, Countess of Salisbury, the last of the Plantagenets was appointed as her governess. Catherine of Aragon doted on her only child and Henry VIII was inordinately proud of his daughter and exhibitionist extrovert that he was, loved to show her off at court.

Although Henry VIII was occasionally unfaithful to his wife, Catherine had accepted and generally turned a blind eye to her husband's infidelities, theirs was generally considered a good marriage by royal standards. In 1526, when it became clear that her now middle aged mother would not produce a son, Mary was sent to complete her education at Ludlow as Princess of Wales and heiress to the throne.

Anne Boleyn was to be Mary's nemesis. Henry VIII, besotted by her dark good looks, was lead to divorce his wife and marry Anne whom he had convinced himself would provide him with the son he had always desired. Anne was ambitious, scheming and tempestuous, the King seemed blind to everything but his passion for the Lady and became increasingly tyrannical and ruthless to anyone who frustrated his designs or stood in his way, a sentiment which did not exclude his unfortunate wife and daughter.

In 1531, during her parent's divorce, when she was seventeen, Mary suffered the humiliation of being declared a bastard by her father and forbidden to see her mother, the adolescent Mary suffered a great deal emotionally as a result of her father's edict and was to bear its scars for the rest of her life. She was removed from the succession by Act of Parliament and relegated to a lower position in the household of her new half-sister Elizabeth, Henry's daughter by Anne.

In 1536 her beloved mother died of cancer at Kimbolton Castle and Mary, still grieving, was forced by her ruthless father to sign a submission undermining everything she believed in. To gain his acceptance, she had to deny that her parent's marriage had been legal and acknowledge her own bastardy. This forced betrayal of the mother she had adored affected Mary deeply, although it was extracted under pressure she was never to quite forgive herself for this act and remained haunted by it. 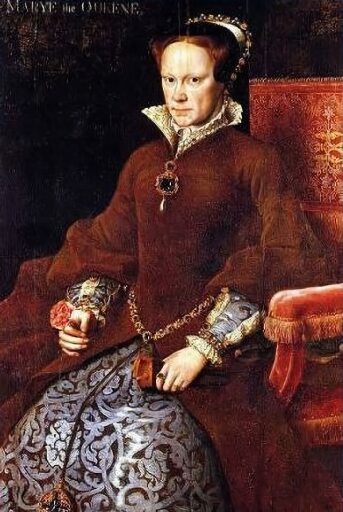 After the execution of Anne Boleyn, Mary was treated more kindly by her father and her new step-mother Jane Seymour, was sympathetic to her. Touchingly, Mary did not reciprocate the hatred she had been shown and was affectionate to Anne Boleyn's now motherless daughter Elizabeth.

Mary suffered much for her adherence to her Catholic faith. Her strongly Protestant brother King Edward VI tried to deprive her of her Catholic religion and bully her into submission, during which time she received the support of her maternal cousin, the powerful Charles V of Spain. On Edward's death she was disinherited in favour of her Protestant cousin, Northumberland's daughter-in-law, Lady Jane Grey. Mary received a letter informing her that her brother was ill, but was warned on her way to visit him that she was walking into a trap and fled to Framlingham Castle. The nation was clearly behind her and triumphing over all past adversity, she entered London as Queen on 3rd of August 1553.

Northumberland was arrested and sent to the Tower along with his sons and Lady Jane. Mary was altogether more merciful than was common in her family, although Northumberland was executed she resisted repeated appeals to do the same to Jane, or her young husband, Guildford Dudley.

A fanatical Catholic, Mary was intent on restoring the country to the 'old religion'. She made an unpopular choice of husband in her Catholic cousin Philip II of Spain, the son of Emperor Charles V, who had frequently given her his support and advice when she had been left alone after her mother's death and on whom she had come to rely for aid at times of need.

English national pride was not prepared to countenance a Spanish King, who was also a Catholic and rebellion broke out led by Thomas Wyatt. Mary arrested her half-sister, Elizabeth and her cousin Edward Courtenay, Earl of Devon, whom she suspected of compliance in the plot and sent them to the Tower after which the fires of revolt were extinguished. The Spanish were reluctant to allow Philip to depart for England until the threat posed by Jane Grey was removed. The unfortunate Jane and her husband were accordingly beheaded. 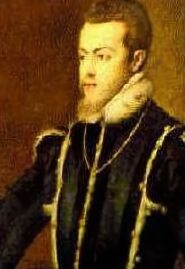 Marriage to Philip of Spain

Philip duly arrived in England and the marriage was celebrated in July 1554. Mary, who had known little affection since her mother's death, was in love for the first time in her life at the age of thirty-eight. Philip, much younger than his bride, unfortunately, did not reciprocate her affection. The Queen's cousin, Cardinal Reginald Pole, the son of Margaret, Countess of Salisbury, executed under Henry VIII, returned from exile as Archbishop of Canterbury and papal legate.

Mary believed herself pregnant but was humiliated when the desperately awaited child did not arrive at the due time and she had to accept that she had been mistaken. The Queen had suffered from a phantom pregnancy. Philip, never particularly enamoured of her, left England shortly after, leaving Mary desolate and deserted and pathetically yearning for his return. Mary re-enacted the statute of de heretico comburendo in 1555, which restored the power to burn heretics. Catholics believed that burning cleansed the soul. The persecution and burnings of Protestants made Mary execrated by most Englishmen. The hated Thomas Cranmer, Archbishop of Canterbury, instrumental in bringing about the divorce of her parents, was one of the first of her victims.

The courageous words of the Protestant martyr, Hugh Latimer, as he was tied to the stake, were taken as inspiration by many Englishmen, "Be of good faith, Master Ridley and play the man. We shall this day light such a candle, by Gods grace in England, as I trust shall never be put out." Her sister and heir Elizabeth, bent on survival, feigned interest in Catholicism which Mary doubted was sincere.

Her husband returned briefly to enlist England's support in a war against France, which lead to the loss of Calais, which had been in English hands since the conquests of Edward III, a source of great sadness to the Queen. She was reported to have said at the time "When I am dead and chested you will find Calais written on my heart."

ain believed herself pregnant of a child which would continue her work and ensure a Catholic succession. It turned out to be a tumour. Her husband, realizing that the succession of Mary, Queen of Scots to the English throne would be disadvantageous to Spain since she was at that time married to the Dauphin of France, had to be avoided at all costs. He persuaded Mary to name Elizabeth as her successor and marry her to a Spaniard. Elizabeth resisted such a marriage and the Queen could not, in good conscience, force her to do so. Mary died, deserted again by her husband, on 17 November, 1558, of either uterine or ovarian cancer. She had asked in her will to be buried beside her much loved mother at Peterborough Cathedral, but her successor, Elizabeth I instead had her buried in the Henry VII Chapel at Westminster Abbey. Deeply antagonistic to each other in life the two Tudor sisters were to lie together eternally in death. James I later erected a fine effigy over their tomb, the Latin inscription at its base translates 'Partners both in throne and grave, here rest we two sisters, Mary and Elizabeth, in the hope of one resurrection.'