The larger than life King Henry VIII, England's bluebeard, was born on 28th June, 1491 at Greenwich Palace and was christened at the church of the Observant Friars. As only the second son of Henry VII and Elizabeth of York he had originally been intended for a career in the church.

Bust of Henry VIII as a child 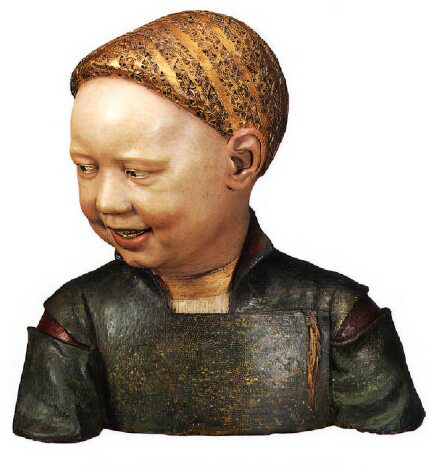 He was provided with an excellent education, becoming fluent in French, Latin, and Spanish. The earliest glimpse we have of Henry comes from the pen of Erasmus, the great humanist scholar, who visited the nine-year-old Prince at the Palace of Eltham with Thomas More;-

' When we came into the hall, the attendants....were all assembled. In the midst stood Prince Henry, now nine years old and having already something of royalty in his demeanour, in which there was a certain dignity combined with singular courtesy.'

On 14th November 1501, at ten years old, the young Henry played a major role at the wedding of his elder brother, Arthur Tudor, when he escorted the bride, Catherine of Aragon, down the aisle at St. Paul's Cathedral. Arthur's sudden death during an epidemic of sweating sickness a few months later resulted in his unexpectedly becoming heir to the throne. Henry was betrothed, in turn, to his brother's widow.

The death of his mother shortly after was said to have greatly affected young Henry. His father grew more avaricious and suspicious in his later years and Henry's wedding was increasingly delayed as the two fathers haggled over money. Catherine herself was reduced to penury and at the instigation of his father, Henry was made to repudiate the marriage agreement.

Concerns were raised about his father's treatment of his only remaining son. " This great boy" as Henry VII referred to him, was kept in seclusion in his apartments, which could be reached only through the kings. He was allowed only the company of his tutors and guards. 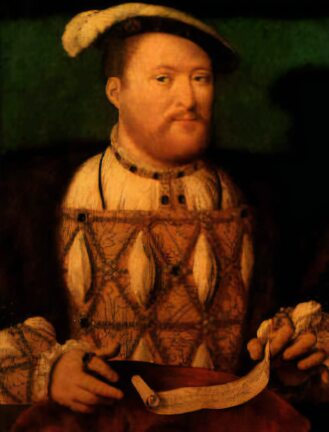 King Henry VIII came to the throne on the death of his father in April 1509, inheriting a stable kingdom and a full treasury, All objections to his marriage with Catherine of Aragon were slung aside. Claiming that he was fulfilling his father's dying wish. Henry's wedding to Catherine was held at the friar's church in Greenwich on 11 June 1509. On 23 June 1509, Henry led the now 23-year-old Catherine from the Tower of London to Westminster Abbey for their coronation, which took place the following day.

Two days after his coronation, Henry arranged for the arrest of his father's two most unpopular ministers, Sir Richard Empson and Edmund Dudley. They were charged with high treason and were executed in 1510." A spot of blood and grease on the pages of English history" as Dickens aptly described him, historian Ian Crofton has argued that such executions would become Henry's primary tactic for dealing with those who stood in his way; the two executions were certainly not be the last of this most bloodstained of reigns. To cement his popularity, Henry also returned to the public some of the money supposedly extorted by the two ministers

Referred to by Winston Churchill as " a spot of blood and grease on the pages of English history", Henry VIII was tall at 6' 3" and well-built like his Yorkist grandfather, Edward IV. Like Edward, in later years muscle was to turn to fat. He possessed his Plantagenet mother's reddish auburn hair, with fair skin and was considered very good-looking by the standards of his day. Described by Giustinian, the Venetian Ambassador to the English Court as 'the handsomest potentate I ever set eyes on; above the usual height, with an extremely fine calf to his leg, his complexion very fair and bright with auburn hair combed straight and short in the French fashion, and a round face so very beautiful that it would become a pretty woman, his throat being rather long and thick'

Henry was intelligent, extrovert and confident, like most of the Tudors, he was well seen in theology. In common with the ruthless Yorkist strain, he could also be cruel and extremely self-willed. He did not take after his Lancastrian ancestors, his Tudor father or his Beaufort grandmother, who tended to be austere, introverted and chaste. Henry was recognisably like his paternal grandfather, Edward IV, a gourmandiser, with an appetite also for women, capricious and cruel, yet always able to command popularity.

In his youth, Henry excelled at sports, and particularly enjoyed jousting, hunting and real tennis. He was also quite an accomplished musician, his best-known piece of music is Pastime with Good Company, otherwise known as The Kynges Ballade.

Thomas, Cardinal Wolsey, the son of an Ipswich butcher, rose rapidly in Henry's service. Able, ambitious and hard-working, Wolsey managed the day-to-day running of the kingdom. In 1520 Henry met the French king, Francis I and displayed his wealth and magnificence at the Field of the Cloth of Gold. The sentiments of " brotherly love" discussed at this costly spectacle evaporated with unseemly haste two years later when Henry invaded France in quest of glory.

In the early years, the marriage of Henry and Catherine was a happy and stable one. Queen Catherine gave birth to a son, named Henry, on 1st January 1511. In tournaments celebrating the event, the extrovert king competed as 'Sir Loyal Heart', tragically, the child died just a few weeks later.

An alliance was formed with his father-in-law Ferdinand of Aragon to launch a joint attack on France, but Ferdinand, true to character, deserted his ally as soon as his own ends had been reached. Humiliated but undeterred, Henry invaded France again in 1513, he besieged Therouanne and Tournai, both of which fell to him. At a skirmish with the French known as the Battle of the Spurs, so named for the speed of the French retreat and fought at Guinegate on 16 August, 1513, Henry finally won the glory that he had spent so much money to attain.

In the King's absence, his brother-in-law, James IV, King of Scots, allied to the French, invaded England, where Catherine of Aragon remained as regent but was defeated and killed at the Battle of Flodden by a force lead by the Earl of Surrey. Henry's elder sister Margaret, the widowed Scots Queen, became regent for her young son, now King James V. In poor taste, Catherine sent James bloodied coat to her husband in France as a victory token. 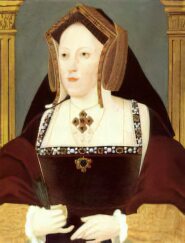 In 1521, Henry defended the Catholic religion from Martin Luther's protests in a book entitled 'The Defence of the Seven Sacraments', a grateful pope awarded him with the title Defender of the Faith, which has been borne by subsequent English monarchs since then.

Catherine was to experience many stillbirths and miscarriages before producing the only surviving child of the marriage, a daughter, Mary, born in 1516. Henry doted on the child and loved to show her off to courtiers but desperately wanted a male heir, without which, he felt, England would fall back into the anarchy of the Wars of the Roses. Although Henry's marriage to Catherine was, in its early years, a happy one, Henry still took mistresses. He conducted an affair with one of the sisters of Edward Stafford, 3rd Duke of Buckingham, either Elizabeth or Anne Hastings, Countess of Huntingdon. The most significant mistress was Elizabeth 'Bessie' Blount, the daughter of Sir John Blount and Catherine Pershall, of Kinlet, Bridgnorth, Shropshire. Elizabeth became his mistress during 1514 or 1515, a relationship which continued for about eight years, she gave birth in June 1519 to Henry's illegitimate son, Henry FitzRoy. The boy was made Duke of Richmond in June 1525, Henry's father Henry VII had been Earl of Richmond before taking the throne. Soon after the birth of his son, the King began an affair with Mary Boleyn. There has been speculation that Mary's two children, Henry and Catherine Carey, were fathered by Henry, but this has never been proved, and the King never acknowledged them as he did Henry FitzRoy. In 1522, a marriage was arranged for Bessie Blount with Gilbert Tailboys, 1st Baron Tailboys of Kyme. 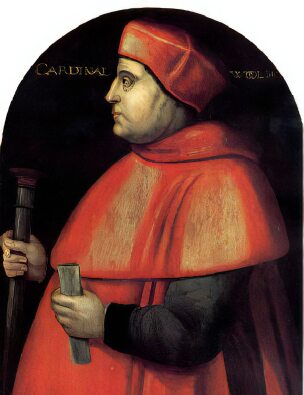 In 1527 Henry became hopelessly infatuated with Anne Boleyn, a young woman of the court. Anne had large, lustrous brown eyes and raven hair, combined with a stylish way of dressing and enchanting French ways acquired during her stay at the court of Francis I. He had now grown tired of her sister, Mary Boleyn, and cast her off. The ambitious Anne refused to go the way of her sister and become his mistress and instead held out for marriage. Henry's conscience, always a very pliable instrument, conveniently came into play. He claimed to be troubled by a verse in Leviticus stating it was sinful for a man to take his brother's wife and as punishment, any such transgressor would be childless. He persuaded himself that this was why God had denied him a male heir by his marriage to Catherine.

Led on by the resolute Anne, now determined to become Queen, Henry resolved that he would divorce Catherine. Catherine, however, refused to comply and acquired the considerable support of her powerful nephew, Charles V, Holy Roman Emperor and King of Spain. The Pope, caught in Charles' power, could not gratify Henry's desire for an annulment.

Despite the strenuous efforts of Wolsey, the Kings Great Matter, as it came to be referred to, dragged on for many years. Henry, characteristically furious and frustrated at not obtaining his own way, defied the Pope, setting himself up as head of the Church of England, a church that was Catholic in doctrine but divorced from the 'Bishop of Rome'. Wolsey, the great Cardinal, having failed to satisfy the King's requirements, was cast down from power despite many years of faithful service.

The king's matrimonial matters had now to proceed swiftly, as Anne had announced herself pregnant and Henry was determined that the child, whom he ardently convinced himself would be the longed-for son, should be born in lawful matrimony. Thomas Cranmer, Archbishop of Canterbury, a man of decidedly Protestant leanings, performed the marriage service.

Henry's marriage to Catherine was declared null and void. The Act of Succession 1533, declared Catherine's daughter, Mary, illegitimate, while Henry's marriage to Anne was declared legitimate; and Anne's issue was decided to be next in the line of succession. Catherine's daughter, the Lady Mary, suffered deprivations and the humiliation of being publicly declared a bastard, she was denied access to her mother, although they continued to correspond in secret.

Bishop Fisher and Sir Thomas More were among many who suffered execution because they could not, in good conscience, subscribe to the Act of Supremacy. More commented that Anne Boleyn might " spurn off our heads like footballs" but it would not be long before her head " would dance the like dance," and so it proved to be. Anne's baby, born in September 1533, to Henry's fury, was not the promised son and heir, but a daughter, named Elizabeth, after the king's mother. The king ungallantly made no efforts to conceal his displeasure. When Anne later miscarried of a son in 1536 her fate was sealed.