Arthur Tudor, Prince of Wales was the firstborn child of Henry VII and Elizabeth of York and the elder brother of the formidable Henry VIII. Arthur was born prematurely, after an eight months pregnancy, at Winchester on 19/20 September 1486. Henry chose the symbolic name of Arthur, in honour of the legendary Dark Age British King, whom he claimed to descend from. The birth of the heir to the throne was celebrated with bonfires in the streets and the singing of the Te Deum at Winchester Cathedral. 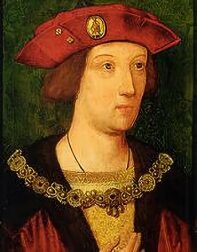 The child was christened at Winchester Cathedral, his godfathers were John de Vere, 13th Earl of Oxford, Thomas Stanley, 1st Earl of Derby and Lord Maltravers, Elizabeth Woodville, widow of Edward IV and Arthur's maternal grandmother, was his godmother while his aunt, Cecily of York, carried the baby into the church.

When Arthur was but two years old, he was betrothed to Catherine of Aragon, youngest daughter of the joint Spanish sovereigns, Ferdinand of Aragon and Isabella of Castile. Arthur was created Prince of Wales at the age of three in November 1489. In 1492, when he was aged six, following a precedent set by his grandfather, Edward IV, the heir to England was sent to live at Ludlow Castle in the Welsh Marches, as President of The Council of Wales and Marches. Although the castle was technically in the English county of Shropshire, it was the administrative centre of the government of Wales.

As the heir to England's throne, Arthur was carefully educated. His tutors were John Rede and the blind poet Bernard André. Arthur was a studious child, thoughtful and reserved. When he was 14 or 15 years old, Thomas Linacre, the English Humanist and physician who also educated Erasmus, became his tutor. His governor and treasurer was Sir Henry Vernon, Arthur may have visited Sir Henry's residence, Haddon Hall, in Derbyshire, where an apartment, called "The Prince's Chamber", is decorated with Arthur's coat of arms.

Henry VII had been haggling with Ferdinand and Isabella for some time regarding the terms of the arranged marriage between his son Arthur and their daughter Catherine of Aragon. The main bones of contention being the dowry she would receive and the two fathers deep distrust of each other, based on previous experience. A final marriage treaty was arrived at in October 1496, after which a proxy marriage took place. 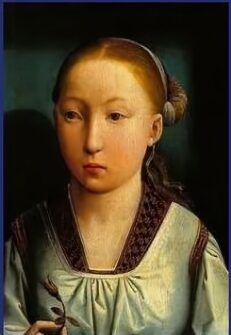 Ferdinand and Isabella raised their fears about sending their daughter to England before the Tudor dynasty was secured by the removal of rival claimants to the throne. Due to his Yorkist descent, Edward, Earl of Warwick, the son of George Duke of Clarence, posed the largest threat to the Tudor claim to the throne. A plot was hatched whereby an escape attempt would be engineered involving Warwick and Warbeck, who would then be hastily recaptured. This resulted in Warbeck being hanged at Tyburn and Warwick beheaded. Warwick, believed to have been mentally retarded, (his sister later said 'he did not know a goose from a capon'), was held prisoner all his short life for being who he was and died because he tried to escape.

Catherine of Aragon was sent to England in 1501 and recieved in her new country with much rejoicing. The royal family waited to receive her in London, Henry, still fearing he had been deceived in some way by the cunning Ferdinand and suspecting that Arthur's bride could be ugly or even worse, deformed, could contain his anxiety no longer and rode with Arthur to see her at Basingstoke. Catherine was a sweet faced, pretty girl with attractive red-gold hair.

A pleasant interlude took place, where Catherine danced some of her native Spanish dances for the King and her future husband, who then departed well satisfied. Henry wrote to her parents that he 'much admired her beauty as well as her agreeable and dignified manner.'

Arthur and Catherine were married at St. Paul's Cathedral, the bride was given away by Arthur's ebullient ten-year-old brother, Henry, Duke of York. There were feasts, jousts and disguisings to celebrate the event. Even the parsimonious Henry, always inclined to be very frugal with money, spent lavishly on the celebrations. The 'upstart' Tudor dynasty gained much in prestige from its new-forged links with the powerful House of Trastamara.

Little has been recorded about the couple's first impressions of each other, but Arthur did write to his parents-in-law that he would be "a true and loving husband" to Catherine and he later related to his parents that he was immensely happy to behold the face of his lovely bride. 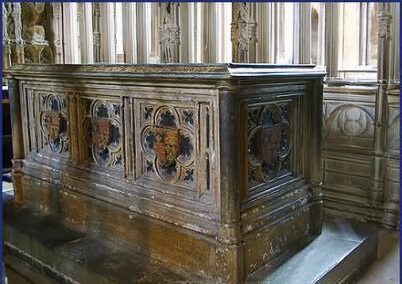 Arthur returned to Ludlow Castle with his sixteen-year-old bride. During the spring, an epidemic of sweating sickness was rife in the area, which some modern theorists tie to a hantavirus. The illness seems to have vanished later in the century. Its victims experienced intense heat, to the extent that in the delirium it inflicted they felt as if their blood was actually boiling, whilst sweating so profusely that it soaked through bedclothes. Both Arthur and Catherine contracted it. Catherine recovered, but Arthur, a pale thin youth who had never enjoyed robust health, did not and died at Ludlow Castle.

Messengers were immediately dispatched to London to inform his parents. Henry and Elizabeth were prostrate with grief at the loss of their eldest son. The king was woken and the news was broken to him by his confessor, the queen was summoned to her husband's bed-chamber, where he told her that Arthur was dead. Seeing him in a state of distress, Elizabeth hid her grief and attempted to comfort him. After she returned to her apartments, Elizabeth of York broke down and the king had to be summoned to comfort her.

Arthur's body was taken to Worcester during a torrential downpour, where he was buried in Worcester Cathedral, Arthur’s tomb in Prince Arthur’s Chantry survives to the present day in the Cathedral. Catherine of Aragon, now Dowager Princess of Wales returned to London, where she was to be received into the household of her mother-in-law, Elizabeth of York. She was later betrothed to Arthur's younger brother, Henry VIII, the new heir to the throne.

Archaeologists used ground-penetrating radar to locate Arthur's tomb in the cathedral in 2002, the tomb is situated several feet below the tomb chest which was constructed several years after his death.