The first of the Tudor dynasty, Henry VII won the prize of England's throne in battle at Bosworth from his Yorkist adversary, Richard III, last of the Plantagenet line of kings. Henry was considered "the nearest thing to royalty the Lancastrian party possessed" by the country's Yorkist element, he was the son of Edmund Tudor, Earl of Richmond and Lady Margaret Beaufort and was born on 28th January, 1457 at Pembroke Castle, Wales. 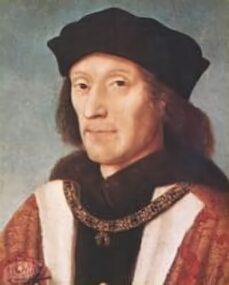 Henry's father, Edmund Tudor, was the half-brother of Henry VI, born of an illicit union between Queen Catherine of Valois, widow of Henry V and Owen Tudor, her Welsh Clerk of the Wardrobe. The discovery of at least three of the queen's illegitimate children had caused a scandal at the time, it was seen as an insult to the memory of the great Henry V. Despite this, Henry VI bestowed the Earldom of Richmond on Edmund and that of Pembroke on his brother Jasper Tudor and they in return became staunch supporters of the House of Lancaster.

Henry's mother, Lady Margaret Beaufort, from whom he derived his debatable claim to the throne, was an intelligent and learned woman, she was said to be the heir of John of Gaunt after the extinction of Henry V's line. This was arguable, since her descent was through Gaunt's illegitimate son John Beaufort, born of the Duke's affair with his long term mistress Katherine Swynford, whom he later married. It was accepted that the Beauforts were later legitimized by King Richard II, but a clause had been inserted into the document debarring the Beauforts from the throne. This Henry's adherents conveniently chose to forget.Click for Tudor genealogy.

The future King Henry VII had been born into the civil strife of the Wars of the Roses, Edmund Tudor's posthumous son, his mother had been only thirteen at the time of his birth. It was reported to have been a difficult confinement. After the death of her husband, Margaret Beaufort had taken refuge in Pembrokeshire, Wales, with her brother-in-law, Jasper Tudor. Henry's grandfather, Owen Tudor, an ardent Lancastrian supporter, had been executed by the Yorkists after the battle of Mortimers Cross. Many of his Beaufort relations had met their death in the long and bloody drawn-out struggle against the House of York.

Prior to Bosworth, Henry had spent much of his life in exile. Although his mother went through three husbands, Henry was Margaret Beaufort's only child. He had nearly been captured and handed over to Edward IV on one occasion but he had escaped to the court of France, who had backed his expedition to England and his bid for the throne.

After the Battle of Bosworth, Henry announced that he had come to the throne by inheritance, leaving the details studiously vague. Henry secured the person of chief male surviving Yorkist claimant to the throne, the young Edward Plantagenet, Earl of Warwick, whom he imprisoned in the Tower. Warwick was the son of George, Duke of Clarence, Edward IV's brother.

Henry VII and Elizabeth of York 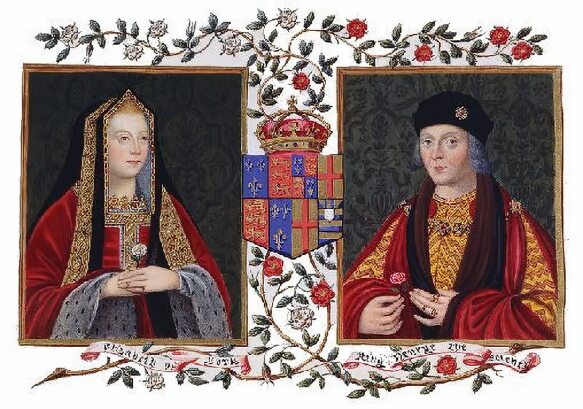 Elizabeth of York, the eldest daughter of Edward IV, whom he had vowed to marry, was escorted to London. He did not marry her until after his coronation, thereby underlining to all that he ruled in his own right but hoped that the marriage would satisfy some of the less extreme Yorkists and lead to their acceptance of the newly established Tudor dynasty.

Elizabeth was tall, fair-haired, attractive and gentle natured. The marriage took place on 18th January 1486 at Westminster Abbey. Nine months later, the new Queen was delivered of a son. He was given the symbolic name of Arthur, in honour of the legendary Dark Age Celtic King Arthur.

The Tudor rose, the product of art, not horticulture, was born, the emblem of a rose both red and white was adopted as one of the king's badges, meant to symbolize the union of the Houses of Lancaster and York. The Queen's household was ruled by Lady Margaret Beaufort. The Queen's mother, the meddlesome and grasping Elizabeth Woodville, suspected of involvement in Yorkist plots, was shut up in a nunnery and stripped of all her belongings.

Henry and Elizabeth went on to have a large family, four of whom were to survive to adulthood. The birth of Arthur was followed by that of a daughter, Margaret, destined to be Queen of Scots, in 1489, then came Henry, a second son, (the future Henry VIII) on whom his father bestowed the title Duke of York, which had been previously held by the Queen's brother Richard, one of the 'Princes in the Tower'. Another daughter followed named Elizabeth for her mother, who did not survive the trials of infancy in Tudor times. A further daughter, Mary was born in 1498, she was briefly to become Queen of France. Then came Edmund and Katherine who both died in infancy.

In the spring of 1486 the new king went on progress through his realm, among other places, he visited York, where Richard III had, through his connections with the city, been very popular. Outwardly at least, he seems to have been well received. 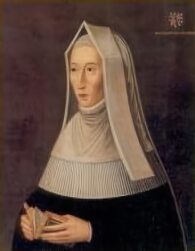 Rebellion broke out in support of a pretender, Lambert Simnel, who posed as the young Earl of Warwick. He was supported by Richard's appointed heir, John de la Pole, the Earl of Lincoln and Francis Lovell, along with Richard's sister Margaret, Duchess of Burgundy. Henry paraded the real Warwick through the streets of London to no avail. The rebels landed from Ireland and the king's army, under the Earl of Oxford, a superb general, met them at the Battle of Stoke Field on 16th June,1487. Lincoln himself was killed. Henry dealt leniently with Simnel who was taken and put to work in the palace kitchens.

Henry's foreign policy was dictated by the need to secure the dynasty he had founded. In 1488 he aided Francis of Brittany. His motives seem to have been to check the power of France, whom he did not want in control of the Channel, as this conjured up the haunting spectre of France, in alliance with the Scots at her northern border, surrounding England, representing a very real threat to her security. Francis eventually accepted French domination. Henry later aided Francis successor, Anne of Brittany.

The King formed alliances with the Emperor Maximilian of Habsburg and Ferdinand and Isabella, the joint sovereigns of Spain, who were eager to gain French territories. To strengthen his dynasty and obtain international recognition of it, Henry signed the Treaty of Medina del Campo with the Spanish monarchs whereby Henry's eldest son, Arthur, the heir to the throne, was to marry Katherine of Aragon, their youngest daughter. Maximillian, with his characteristic aptitude for self-preservation, deserted his allies once his ends had been achieved.

Anne of Brittany in the meantime had been forced to accept a proposal of marriage by Charles VIII of France, thereby Brittany had been annexed to France. An English army landed at Calais in 1492. Henry was bought off by Charles with the offer of reimbursement of the cost of his Breton campaigns and the arrears of pension owed to Edward IV (from the Treaty in Piquiny of 1475). 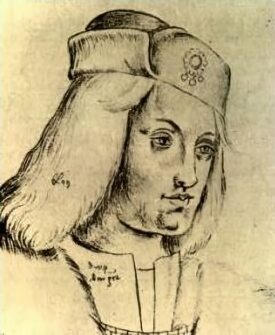 A second pretender arose to threaten the security of the new regime, Perkin Warbeck, a handsome young man with a superficial resemblance to Edward IV, who claimed to be Richard, Duke of York, the younger of the Princes in the Tower.

Warbeck was purported to have been rescued before his "brother" Edward V had been murdered in the Tower and smuggled abroad to safety. He gained the immediate support of the old Duchess of Burgundy, determined to be a thorn in the side of her brother's supplanter on the English throne, it was said that she schooled Warbeck in his role, and made him extremely convincing. Sir William Stanley was reported to have said that if this was indeed Edward IV's son, he would never fight against him.

When Burgundy refused to surrender Warbeck, Henry severed all trade links with Flanders illustrating that securing the Tudor dynasty was put above the economy and all other considerations.

A report was made to the king regarding Stanley's comments about the pretender. When it was pointed out to the king that it was Sir William Stanley's timely intervention that had saved his life at Bosworth, he replied that he had also delayed long enough for him to have lost it. Stanley was executed on 16th February 1495. Thereafter Henry's slighted step-father stayed away from court. Lady Margaret Beaufort herself took a vow of chastity and ceased to cohabit with her husband.

Perkin Warbeck landed in Ireland in July 1495 and besieged Waterford, when the siege was raised he sailed for Scotland where he was welcomed by King James IV. The King of Scots allied with him, marrying Warbeck to his cousin, Lady Katherine Gordon. Their planned invasion of England was, however, abandoned.

The pretender then returned to Ireland while his Scots allies conducted border raids. He landed in England but as Henry's army approached, Warbeck, lost his nerve and fled, claiming sanctuary in Beaulieu Abbey but then had a sudden change of mind, surrendered and threw himself on the King's mercy. Henry was lenient with him and kept him and his wife close at hand, at court Henry VII continued.