Catherine of Valois was the daughter of King Charles VI of France and Isabelle of Bavaria, the daughter of Duke Stephen III of Bavaria-Ingolstadt. Catherine was born at the royal palace of the Hôtel Saint-Pol in Paris on 27 October 1401, one of eight children born of the marriage. An older sister, Isabella of Valois, had previously been married to King Richard II. King Charles VI of France 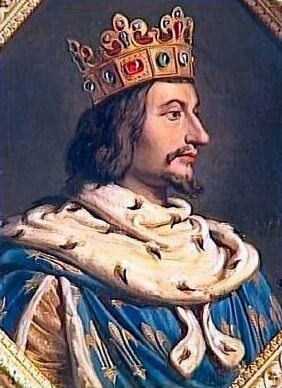 Catherine's father, Charles VI was mentally ill, he is believed to have suffered from schizophrenia, Charles experienced delusions, believing he was made of glass or denying he had a wife and children. He ran from room to room until he collapsed from exhaustion, declaring that his enemies were upon him. Charles' illness is believed to have been later inherited by his grandson, Henry VI of England. Charles' ancestors were closely related. His mother, the French Princess, Joan of Bourbon (1338-1377) was slightly unstable, as were her brother, Louis, Duke of Bourbon, her father and grandfather, she suffered a complete nervous breakdown in 1373 after the birth of her seventh child.

By the time Catherine had reached the age of three, the decision was reached that for the sake of his health and dignity Charles VI should retire from public life. Catherine's mother, Queen Isabeau, an arrogant and ruthless woman, was openly unfaithful to her father. Acquiring the assistance of her brother Louis, Duke of Bavaria and her brother-in-law Louis, Duke of Orleans, she seized control of the government of France from the rival forces of the King's cousin John, Duke of Burgundy. Catherine and her sisters, Marie and Michelle and her brother the Dauphin Louis, were at one point carried off by the Duke of Bavaria during power struggles at the French court. Catherine's early years were dismal and impoverished, her only education was obtained in a convent at Poissy.

King Henry V of England renewed the English claim to the French throne and invaded France. An agreement was finally reached in 1420 by the Treaty of Troyes. By its terms King Charles VI of France recognised Henry as his heir, disinheriting his son, the Dauphin Charles and the English King married Charles' youngest daughter, Catherine on 2nd June 1420.

Catherine travelled to England with her husband and was crowned at Westminster Abbey on 23 February 1421. Henry's brother, Thomas, Duke of Clarence was killed fighting in France at the field of Baugy. Determined to avenge his death, Henry returned to France in June 1421. Queen Catherine gave birth to a son, Henry, on 6 December 1421 at Windsor. Leaving her son in the care of his uncle, Humphrey, Duke of Gloucester, she joined Henry in France in May 1422, the child and his father were never to meet, Henry V contracted dysentery during the siege of Meaux and died on 31 August 1422, at the age of 34, leaving Catherine a widow. Her father King Charles VI died a few months later, leaving the infant Henry VI king of England and France.

The wood effigy of Catherine of Valois, carried at her funeral, Westminster Abbey 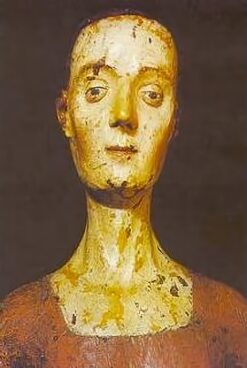 In 1428, Henry V's younger brother, Humphrey Duke of Gloucester, concerned that a step-father of the infant king could wield too much influence, secured the passing of an act to prevent Catherine from marrying without the consent of the king and council. Now Dowager Queen, Catherine sometimes took part in state processions, contemporaries describe how often on such occasions, 'the infant king was seated on her lap'.

Owen ap Maredudd ap Tudor, a Welshman of relatively modest background, who had entered the service of Henry V and distinguished himself at Agincourt, was appointed as keeper of the wardrobe to the twenty year old widow. By all accounts Owen was a handsome young man, the chroniclers dwell upon the beauty, at some point he became the Dowager Queen's lover. Legend relates that Owen caught the Queen's eye when she saw him swimming, or that he tripped and fell into her lap when dancing. The affair is thought to have started at Leeds Castle in Kent.

No documentation has survived of Catherine's marriage to Owen Tudor in 1429. The discovery of at least three of the queen's illegitimate children had caused a scandal at the time and was seen as an insult to the memory of the great Henry V. Owen and Catherine produced at least five children in all. Edmund, Jasper and Owen Tudor were all born away from court. Owen later became a monk. They also had two daughters, Tacinda, who married Reginald Grey, 7th Baron Grey de Wilton and Margaret later became a nun.

In 1436, when Catherine was pregnant with her fifth child by Tudor, rumours of the Queen's secret marriage reached the ear of Humphrey, Duke of Gloucester. Owen Tudor was imprisoned and Catherine retired to Bermondsey Abbey, shortly after giving birth to their daughter Margaret, on 3 January 1437. Distressed and traumatised at the forced separation from her husband and children, Catherine fell gravely ill. Her son Henry VI sent her a 'tablet of gold, weighing thirteen ounces on which was a crucifix set with pearls and sapphires' as a token of his love. Catherine died in disgrace on 3rd January 1437 and was buried in the Lady Chapel of Westminster Abbey. Henry VI provided an altar tomb and included an inscription describing her as his father's widow, with no reference to her second marriage.

Catherine's will addressed to her son the King, refers in a guarded manner to an intent known only to him, 'in tender and favourable fulfilling of mine intent' is thought to refer to her wishes regarding her children by Owen Tudor, which may have been revealed to him before her confinement in Bermondsey. 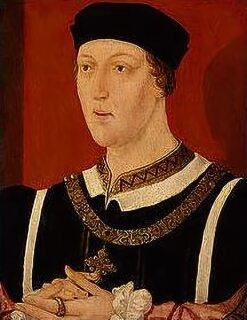 Owen Tudor was arrested soon after her death, he appeared before the Council, acquitted himself of all charges and was released. On his return journey to Wales, he was arrested again. He attempted to escape from Newgate Jail in early 1438 and was eventually moved to Windsor Castle in July of that year. Henry VI, when he came of age, 'never forgave his uncle Gloucester the harsh usage his mother had experienced'. He knighted his stepfather Owen, made him Warden of Forestries, and appointed him a Deputy Lord Lieutenant.

Owen lived on until 1461, on 2nd February 1461 he led the Lancastrian forces at the Battle of Mortimer's Cross for his stepson against Edward, Earl of March, the Yorkist claimant to the throne. The Lancastrian's were defeated in battle and Owen was subsequently beheaded at Hereford. He was reported not to have been convinced of his impending death until the collar was ripped off his doublet by the executioner. At this point, he is alleged to have said that "the head which used to lie in Queen Catherine's lap would now lie in the executioner's basket". His head was set on the market cross, where a madwoman combed his hair and washed his face, setting lighted wax torches round about it.

The two eldest sons of Owen and Catherine, Edmund and Jasper, went to live with Katherine de la Pole, Abbess of Barking and sister of the Duke of Suffolk. Sometime after 1442, the king, their half-brother, took on a role in their upbringing and they were given Earldoms by Henry VI, Edmund became Earl of Richmond and married Lady Margaret Beaufort, he was to become the father of Henry VII, the founder of England's Tudor dynasty. Jasper Tudor became Earl of Pembroke.

The wooden effigy which was carried at Catherine's funeral still survives at Westminster Abbey and is on display in the Undercroft Museum. Her tomb was originally surmounted by an alabaster memorial, but this was destroyed during extensions to the abbey in the reign of her grandson, Henry VII. It has been said that King Henry ordered her memorial to be removed to distance himself from his illegitimate ancestry. At this time, the lid of Catherine's coffin was accidentally raised, revealing her corpse, which for generations became a tourist attraction. In 1669 the diarist Samuel Pepys kissed the long-deceased queen on his birthday- 'On Shrove Tuesday 1669, I to the Abbey went, and by favour did see the body of Queen Catherine of Valois, and had the upper part of the body in my hands, and I did kiss her mouth, reflecting upon it I did kiss a Queen: and this my birthday and I thirty-six years old and I did kiss a Queen.' Catherine's remains were not properly re-interred until the reign of Queen Victoria when in 1878 her body was re-buried in Henry V's chantry.

The Ancestry of Catherine of Valois