The future King Richard II was born at the Archbishop's Palace, Bordeaux, Aquitaine, at Epiphany, on 6th January 1367. The product of a first cousin marriage, he was the son of Edward III's eldest son, Edward, Prince of Wales, the Black Prince and his wife, Joan, Countess of Kent. Joan, known as the 'Fair Maid of Kent', was the daughter of Edmund, Earl of Kent, the youngest of Edward I's sons by his second wife, Margaret of France. This gave Richard a double descent from Edward I, due to previous cousin marriages in his family, his grandparents had also been first cousins, Richard was, therefore, a highly inbred individual.

Richard II from the Wilton Dyptich 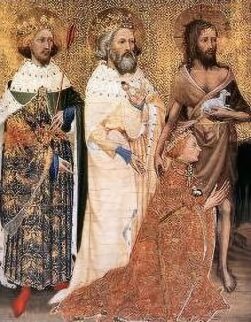 His mother, Joan of Kent, has been described as one of the most beautiful and scandalous women of her age. Unusual for the day, Richard's parent's marriage was a genuine love match and not a political alliance. Joan of Kent had previously been married to Thomas Holland and through this former marriage, Richard had half-siblings.

Joan caused quite a scandal by entering into a clandestine marriage with Holland at the age of twelve. The following winter, while her husband was serving abroad, Joan married again to William Montacute, the Earl of Salisbury's heir. When Holland returned to England a few years later, he revealed his secret marriage to Joan and appealed to Pope Clement VI for his wife's return, Joan supported his appeal. Salisbury resorted to keeping her a prisoner in his home. The Pope annulled Joan's marriage to Montacute and ordered to return to Thomas Holland, with whom she lived for the next eleven years. The marriage produced four children.

Richard had an elder brother, Edward of Angouleme, who had died in infancy of bubonic plague, leaving Richard his father's sole heir. Edward, the Black Prince predeceased Edward III, dying of dysentery in June 1376. He had obtained a promise from his father that Richard should succeed him. After his grandfather's death, the ten-year-old Richard was duly crowned at Westminster Abbey on 16 July 1377. 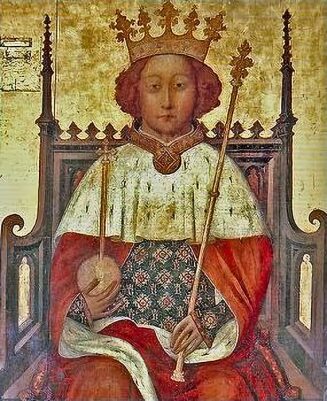 His charismatic grandfather and martial father were a hard act to follow. Artistic and sensitive, Richard was a pacifist, not an attitude to endear him to those of his barons who looked back to a heroic past.

Richard is the first English monarch for whom a contemporary painting survives. He was built in the typical Plantagenet mould, around six feet tall, auburn-haired and good-looking, with finely chiselled features and beautiful, long, tapering hands. The chronicler Adam of Usk described him as being ' as beautiful as Absalom.' Richard was also volatile and unstable, brooding and vengeful, and in him, the famed Plantagenet temper boiled into a frenzy.

A description by a Monk of Elvetham relates King Richard was of the common stature, his hair yellowish, his face fair and rosy, rather round than long, and sometimes flushed; abrupt and somewhat stammering in his speech, capricious in his manners, and too apt to prefer the recommendations of the young, to the advice of the elder, nobles. He was prodigal in his gifts, extravagantly splendid in his entertainment and dress, timid as to war, very passionate toward his domestics, haughty and too much devoted to voluptuousness. So fond of late hours, that he would sometimes sit up all night drinking."

Richard II during the Peasant's Revolt 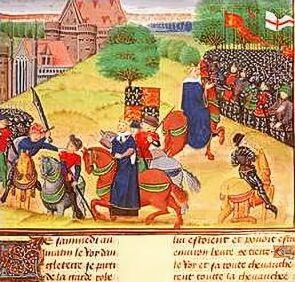 The country was governed by Richard's uncle John of Gaunt and a council during his minority. In 1381, when Richard was fourteen, the Peasants Revolt, probably the first socialist movement in English history, broke out in Kent due to simmering resentment of a highly unpopular poll tax. The rebels marched up to London, their leaders, Watt Tyler, Jack Straw and a priest, John Ball, demanded the abolition of serfdom and a pardon for all participants in the uprising. Discontented recruits to the cause were many and their army swelled to what is estimated at around ten thousand.

All those connected with the hated poll tax were summarily executed on the peasants progress to London. John Ball chose as his text :- "When Adam delved (dug) and Eve span, who was then the gentleman?" The rebels were welcomed by the majority of Londoners and the army camped at Blackheath on 14th June, threatening London.

Watt Tyler met Richard and his terrified retinue at Mile End. The young King's position was precarious and having little choice, he ordered charters drawn up granting all of Tyler's requests. A further meeting was arranged at Smithfield. Tyler attended alone and repeated further demands. Richard wearily conceded to grant them all. Washing out his mouth with water, Tyler proceeded to spit it out in the king's presence, at which Walworth, the Mayor of London, incensed at what he saw as impertinence, stabbed Tyler to death. The rebel army was unclear at what was happening in the distance, seizing the initiative, Richard advanced alone, calling out loudly "I am your King follow me." and led the rebel army away. The revolt was put down with severity, the young king, in a characteristic outburst of venom, wreaked a terrible vengeance and the heads of its leaders were displayed on pikes at London Bridge.

At fifteen, Richard married Anne of Bohemia in St. Stephen's Chapel at Westminster Abbey. Anne was the daughter of the Holy Roman Emperor, Charles IV, and the sister of King Wenceslas of Bohemia. The couple were to become devoted to each other and the queen exercised a moderating influence on her husband but their union produced no issue. King Richard II, like Edward II before him, was unfortunately reckless in his generosity to favourites, Robert de Vere, Earl of Oxford was raised to a Duke. Anger smouldered and came to a head in 1387 when Richard failed to bring certain of his favourites to trial, he was subjected to force. He was defeated by a rebel army led by his uncle, Thomas, Duke of Gloucester at Radcot Bridge in Oxfordshire, Gloucester had been joined by John of Gaunt's son, Henry of Bolingbroke. At the 'Merciless Parliament' of 1388, the Lords Appellant demanded radical changes in the royal household, the execution of the king's principal supporters and de Vere's estates confiscated. The House of Commons feared the King's attempts to undermine the authority of parliament and he was placed under the control of a council. Their intransigence fueled a smouldering desire for revenge in the unstable Richard.

Richard delighted in lavish dress and extravagant jewels. He is popularly credited with introducing the use of the pocket-handkerchief. In common with his ancestor Henry III, he venerated the memory of the Saxon King, Edward the Confessor and adopted his coat of arms, which were quartered with his own.

Tomb of Richard II and Anne of Bohemia, Westminster Abbey 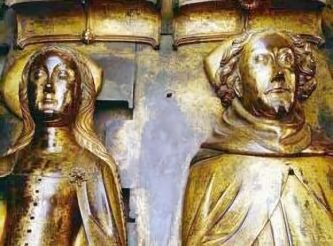 Tragically, his beloved Queen, Anne, died of the plague in 1394, aged but twenty-eight. Richard's grief was terrible, distraught and emotionally unstabilized, he had Sheen Palace, where Anne had died, razed to the ground. The Queen was buried at Westminster near to St. Edward's shrine. An embarrassing incident marred the funeral service, Richard was angered by Richard Fitzalan, Earl of Arundel, who had the audacity to arrive late. When he tactlessly asked the King to excuse his attendance, Richard completely lost control. In his passionate grief and fury he seized a wand from one of the vergers and struck Arundel so violently about the head with it that he fell to the ground dazed.

Richard's mental state has long been an issue of historical debate the Victorian historian Bishop Stubbs has stated that towards the end of his reign, Richard's mind "was losing its balance altogether". Historian Anthony Steel, who wrote a full-scale biography of the king in 1941, took a psychiatric approach to the issue, and concluded that the king suffered from schizophrenia. This opinion was challenged by V.H. Galbraith, who argued that there was no historical basis for such a diagnosis, a line that has also been followed by later historians of the period, like Anthony Goodman and Anthony Tuck. Nigel Saul, who wrote the most recent academic biography on Richard II, concedes that - even though there is no basis for assuming the king had a mental illness - he showed clear signs of a narcissistic personality, and towards the end of his reign "Richard's grasp on reality was becoming weaker".

Two years after Anne's death, Richard married again, taking Isabella of Valois, the six-year-old daughter of Charles VI of France, as his second wife. Richard treated her with great kindness and they were to become extremely fond of each other.

Richard II and Isabella of Valois 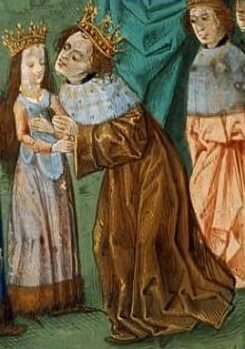 Richard's brooding on past slights culminated with his taking action with ruthless suddenness in 1397. His old opponents were placed under arrest and his uncle, Thomas Duke of Gloucester, was murdered. He exiled his cousin, Henry Bolingbroke, who was one of the five Lords Appellant, in 1399. On John of Gaunt's death, the following year, Richard disinherited Henry and confiscated the vast Lancastrian estates.

Henry reacted by invading England, landing at Ravenspur in Yorkshire, on the pretext of recovering his estates, but in reality, he intended to seize his cousin's throne. Richard, in Ireland at the time, sailed to Wales. The King met Henry's representatives at Conway Castle and was informed that if he restored Henry's estates and surrendered certain councillors for trial, he could remain in power. He agreed but was betrayed and instead of being returned to power found himself the inhabitant of a dungeon in the Tower.

A Parliament was called at the end of September, at which Henry claimed the throne. Richard was declared a tyrant and deposed. He was taken up to Pontefract Castle, in Yorkshire and there it is certain, he met his end around the second week in February 1400. Although Henry of Lancaster may have been prepared to let Richard live, the situation changed when it was discovered that the earls of Huntingdon, Kent and Salisbury and Lord Despenser, and possibly also the Earl of Rutland, were planning to murder the new king and restore Richard in the Epiphany Rising. Although averted, the plot highlighted the danger to Henry of allowing Richard to live. His body was taken south from Pontefract and displayed in the old St Paul's Cathedral on 17 February before burial in Kings Langley Church on 6 March. His skeleton was examined in 1871 by Dean Stanley of Westminster but showed no marks of violence. Starvation was the most likely cause, although this has never been proven.

After being displayed at St. Paul's, Richard's body was buried in King's Langley Church, Hertfordshire. His child queen, Isabelle of France mourned him deeply and sincerely. Henry IV wished to form an alliance between herself and his eldest son, Henry, now Prince of Wales, but loyal to the memory of her husband, she was inflexible in refusing to even contemplate it. Isabelle was eventually returned to her father in France. She was married to Charles of Angouleme and tragically died in childbirth.

Richard II's body was later moved to Westminster Abbey by Bolingbroke's successor, Henry V, who had been close to him in his boyhood, there it was reburied beside his beloved first wife, Anne of Bohemia. The tomb was opened in 1871 during restoration work to the abbey. There were no marks of violence on Richard's skull and even some of the teeth were preserved. A staff, sceptre, part of the ball, two pairs of royal gloves, and fragments of their peaked shoes remained. Several relics which seem to have taken from the tomb opening in 1871, were recently discovered in a cigarette box in the basement of the National Portrait Gallery. The contents of the box, dated 31 August 1871, included fragments of wood, some fabric, and a piece of leather from one of the gloves.