Duke of Richmond and Somerset

Henry, given the surname FitzRoy, meaning 'son of the King' was born in June 1519, he was the illegitimate son of King Henry VIII and Elizabeth 'Bessie' Blount, a maid of honour to his first wife, Queen Catherine of Aragon and the daughter of John Blount, Esquire, who was said by some sources to have originated from Knevet in Shropshire. 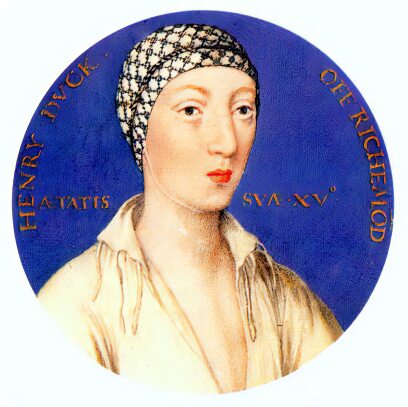 Henry FitzRoy was conceived when Queen Catherine was approaching her last confinement with another of Henry's children, which sadly turned out to be a stillborn daughter in November 1518. To avoid scandal, the pregnant Bessie Blount was taken from court to the Augustinian priory of St Lawrence at Blackmore near Ingatestone, in Essex, where she gave birth to her child, she was seventeen at the time, the exact date in June of the birth is not known with certainty.

Henry VIII was ecstatic when he received news of the birth of a healthy son, he reportedly visited Bessie and her son several times, though Bessie never returned to court as his mistress. The date of the child's christening similarly went unrecorded, though it is known that Cardinal Thomas Wolsey stood as his godfather and attended the event. A daughter named Elizabeth was born to Bessie sometime around 1520, who is suggested by some sources to also be the king's child. In 1522, the King took Mary Boleyn, sister of Anne Boleyn as his new mistress and a marriage was arranged for Bessie with Gilbert Tailboys, 1st Baron Tailboys of Kyme in 1522.

On 7th June 1525 at the age of six, Henry FitzRoy was made a Knight of the Garter at St George's Chapel, Windsor. On 18 June of the same year, he was elevated to peerage when his father created him Duke of Richmond and Somerset and Earl of Nottingham at a glittering ceremony, which took place at Bridewell. The title of Earl of Richmond had been held by Henry VIII's father, Henry VII and his grandfather Edmund Tudor, while the title Duke of Somerset had last been held by members of the Beaufort family, relatives of Henry VIII's grandmother, Margaret Beaufort. 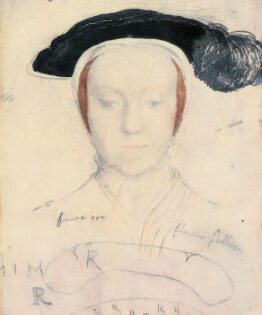 Later that year Henry was granted several other appointments, including Lord High Admiral of England, Lord President of the Council of the North, and Warden of the Marches towards Scotland, the effect of which was to place the government of the north of England in his hands. The young Duke was raised like a Prince at Sheriff Hutton Castle in Yorkshire, Richard Croke a relative of the Blount's, was appointed his tutor. John Joachim, Seigneur de Vaux and the French Ambassador, wrote of Richmond as " a most handsome, urbane and learned young gentleman, very dear to the King on account of his figure, discretion and good manners. he is certainly a wonderful lad for his age" and in 1531, the Venetian Ambassador said: "so much does he resemble his father."

When King Henry VIII was in the process of divorcing Catherine of Aragon, it was suggested that FitzRoy should marry his half-sister Mary to prevent the divorce and strengthen FitzRoy's claim to the throne. Anxious to prevent the annulment and Henry's eventual break with the Roman Catholic Church, the Pope was even prepared to grant a special dispensation for the proposed marriage.

A few months after Henry VIII's marriage to Anne Boleyn, on 28 November 1533, the fourteen-year-old Richmond, as he came to be known, was married to Lady Mary Howard, the only daughter of Thomas Howard, Duke of Norfolk and the first cousin of Queen Anne Boleyn. He was on very good terms with his brother-in-law, the poet Henry Howard, Earl of Surrey. Richmond is said to have been one of the peers who served on the jury at the trial of Anne Boleyn on the 15th May 1536, he was also present at Anne Boleyn's execution on Tower Green.

In early July 1536, Richmond was reported to be ill with pains in his chest and a cough, which was diagnosed as consumption (usually identified as tuberculosis), he died at the age of seventeen at St. James's Palace on 23 July 1536.

His father-in-law, the Duke of Norfolk issued orders that the body be wrapped in lead and taken in a closed cart for secret interment, in the Cluniac priory of Thetford. The only mourners were two attendants who followed at a distance. His young widow Mary Howard was refused a pension by the King, as the couple were so young it is doubtful that the marriage had ever been consummated. At the Dissolution of the Monasteries, his body was moved to Framlingham Church in Suffolk. His wife, Mary Howard, was also buried in his ornate tomb after her death in 1557.