She was the eldest of three siblings, a brother George, who was born around 1503, was later created Earl of Rochford and a sister Anne, born around 1507 was destined to become the second queen of King Henry VIII. Two other brothers, Henry and Thomas did not survive the perils of infancy in Tudor times and died young. Mary Boleyn 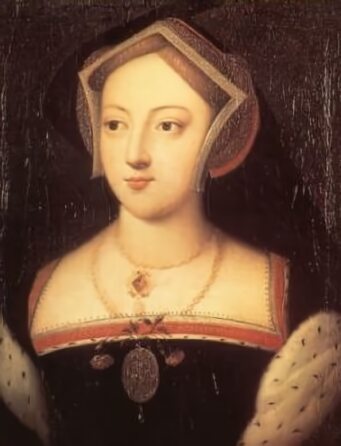 The Boleyn family descended from merchant stock, her great-grandfather, Geoffrey Bullen, was a London mercer who rose to be Mayor of the city from 1457-8 and recieved a knighthood. Her mother, Elizabeth Howard, was of much more illustrious origins, the daughter of Thomas Howard, Earl of Surrey, she was descended from Edward I and a host of aristocratic families.

Mary grew up at Hever Castle near Edenbridge in the Kent countryside and was considered to be the prettier of the Boleyn sisters, she was reported to have had fair hair and blue eyes. In 1513 Mary was sent to the court of Brussels to serve as maid of honour to Margaret, Archduchess of the Austria and Regent of the Netherlands. The Archduchess was reported to be delighted with her. She later joined the entourage of Princess Mary, sister of Henry VIII, when she journeyed to France to become the wife of its king.

Mary acquired an unsavoury reputation at the French court, she was eventually to become the mistress of the French king, Francis II, before being passed on to various courtiers. Francis ungallantly named her his "English mare" in reference to the number of times he had ridden her and was later to refer to her as "A great whore, 'the most infamous of all".

Following her return to England, Mary was appointed as Lady-in-Waiting to Henry VIII's Queen Catherine of Aragon and was married to William Carey, an esquire of the body, in February 1520, the king attended the wedding and made them a gift of 6s 8d. She later caught the eye of Henry VIII, who in turn made her his mistress. She had two children to William Carey, Catherine born around 1524 and Henry, who was born in March 1526. William's acceptance of his wife's affair with the king resulted in his being rewarded with two keeperships, a stewardship, an annuity, and manors and estates in two counties.

The affair had ended by mid-summer, 1525 after which the king's attentions passed to her younger sister, Anne. Anne proved less compliant than Mary and refused to become Henry's mistress, leading him to divorce Catherine and break with the Roman Catholic church to marry her and make her Queen of England. William Carey died of the sweating sickness on 23rd June 1528 and the wardship of the young Henry Carey was granted to his aunt Queen Anne by Henry VIII. The Queen later oversaw his upbringing. Henry was raised at a religious house in preference to the court and his mother saw little of him. Mary's self-serving father displayed no intention of providing financial aid but Anne persuaded Henry to provide a small annual pension.

Mary fell from her sister's favour when at the end of the summer of 1528, a scandal developed at court when Mary appeared to be pregnant, banished from court by her furious sister, she finally revealed that she had contracted a secret marriage with Sir William Stafford three months previously, whom she married for love. In dire financial straits, she was forced to ask Thomas Cromwell to intercede with her brother-in-law on her behalf. She wrote to him:-

"...well might I have had a greater man of birth and a higher, but I ensure you I could never a had one that should a loved me so well, nor a more honest man. I had rather beg my bread with him than be the greatest Queen christened ... and I believe verily he would not forsake me to be a king." 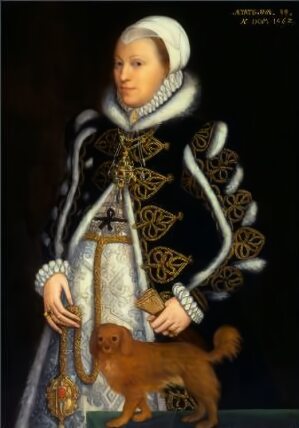 When Anne later fell from power Mary did not visit her in the Tower of London. Nor did she visit their brother George, accused with others of being Anne's lover. Both were beheaded in 1536. 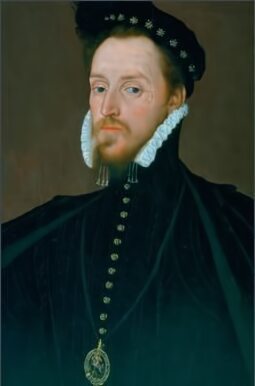 Elizabeth Howard died the year after Anne's execution, Thomas Boleyn the following year. Mary, who inherited some of the Boleyn property after the death of her parents, lived on in quiet obscurity with her second husband, mainly at Rochford in Essex for seven years after her sister's execution dying of natural causes on 19th July 1543. Her son by William Stafford died around 1545.

Her daughter Catherine Carey, who served as a witness at the execution of her aunt Anne Boleyn, married Sir Francis Knollys in 1539, the marriage produced twelve children, one of which, Lettice Knollys, married Robert Dudley, Earl of Leicester, the favourite of her cousin, Queen Elizabeth I By her first marriage to Walter Devereaux, Earl of Essex, she became the mother of Robert Devereaux, Earl of Essex, a handsome and high spirited young man, who later also became a favourite of the Queen. He was executed after leading an ill-fated rebellion against her in 1601.

Her son Henry Carey was rumoured to be the illegitimate child of Henry VIII, and it was remarked upon that he resembled the king physically. Although Henry VIII never acknowledged him as such, he was conceived during the relationship of Mary and the king and was christened Henry in his honour. When the young Henry was ten years old, John Hales, vicar of Isleworth remarked that he had met a "young Master Carey", whom some monks believed to be the king's bastard. Henry did provide for Mary's son after her husband's death. He was married to Ann Morgan in 1545 and produced a large family. Henry Carey was created Baron Hunsdon by his cousin Elizabeth I in January, 1559. He served as her advisor and put down the Catholic Dacre rebellion against the Queen in February 1570. The Queen wrote to him with obvious affection:-

"I doubt much, my Harry, whether that the victory were given me, more joyed me, or that you were by God appointed the instrument of my glory; and I assure you that for my country's good, the first might suffice, but for my heart's contention the second pleased me ... you have done much for honour ... You loving kinswoman, Elizabeth R."

Henry Carey died on July 23, 1596, at Somerset House, on his deathbed Elizabeth I offered to create him Earl of Wiltshire; which he refused, saying "Madam, as you did not count me worthy of this honour in life, then I shall account myself not worthy of it in death." He was buried at Westminster Abbey.