The tragic Lady Jane Grey was the daughter of Henry Grey, Marquis Dorset and Frances Brandon, Duchess of Suffolk. Jane's claim to the throne was acquired through her maternal grandmother, Mary Tudor, (pictured left) who was the beautiful younger sister of Henry VIII. After the death of her first husband, the King of France, Mary fell in love with and married Charles Brandon, Duke of Suffolk, a country gentleman ennobled by Henry VIII. She was considered by contemporaries to have married far beneath her. 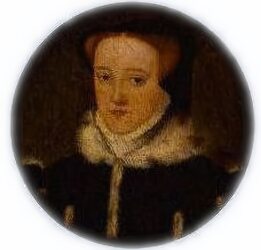 The marriage produced a son Henry Brandon and two daughters, Frances and Eleanor Brandon. The elder of these, Frances, later married Henry Grey, Marquis Dorset, the great-grandson of Queen Elizabeth Woodville (queen of Edward IV) through her first marriage to Sir John Grey. The Grey family had an ancient and impressive lineage, originally being granted lands by Richard the Lionheart. Mary Tudor's grandaughter, Jane Grey, was born at Bradgate Manor, on the edge of Charnwood Forest in Leicestershire, in October 1537.

Jane's was a harsh upbringing, although she received an excellent education, having studied Latin, Greek and Hebrew as well as modern languages. Her mother had given birth to a son who died before Jane's birth. Jane was followed by two sisters, Catherine and Mary, who completed the family. Mary, unfortunately, was hump-backed and a dwarf while Catherine was considered the beauty of the family. A contemporary, Baptista Spinola, a Genoese merchant described Lady Jane as “very short and thin, but prettily shaped and graceful. She has small features and a well-made nose, the mouth flexible and the lips red. The eyebrows are arched and darker than her hair, which is nearly red. Her eyes are sparkling and reddish brown in colour. I stood so near her grace that I noticed her colour was good but freckled. When she smiled she showed her teeth which are white and sharp. In all a gracious and animated figure”. Bishop Godwin described her as "handsome, incredibly learned, very quick-witted and wise both beyond her sex and above her age."

Jane's parents were strict and domineering and hers was not a particularly happy childhood:-

"I will tell you a truth which perchance ye will marvel at. One of the greatest benefits that God ever gave me is that he sent me so sharp and severe parents and so gentle a schoolmaster. For when I am in the presence of Father or Mother, whether I speak, keep silence, sit, stand or go, eat, drink, be merry or sad, be sewing, playing, dancing, or doing anything else, I must do it as it were in such weight, measure and number, even so perfectly as God made the world; or else I am so sharply taunted, so cruelly threatened, yea presently sometimes with pinches, nips and bobs and other ways (which I will not name for the honour I bear them), so without measure misordered, that I think myself in hell, till time comes that I must go to Mr Aylmer, who teacheth me so gently, so pleasantly, with such fair allurements to learning, that I think all the time nothing while I am with him. And when I am called from him, I fall on weeping because whatsoever I do else but learning is full of grief, trouble, fear and wholly misliking to me."Lady Jane Grey, 1550

Thomas Seymour, the Lord Admiral, suggested that Jane join the household of his wife, Henry VIII's last Queen, Catherine Parr, in the chance, that he might be able to negotiate her marriage to his nephew, Edward VI. Although Jane grew to be close to Queen Catherine, who encouraged her love of learning, much to her parent's chagrin, Seymour failed to bring about the planned ambitious match.

John Dudley, Duke of Northumberland and Protector during the minority of the young King, envisaged a scheme whereby Jane was to marry his son, Guildford Dudley, the marriage took place on 25 May 1553, at the Dudley's London residence, Durham House. He then persuaded the mortally ill Edward to disinherit his sisters, Mary and Elizabeth, declaring both to be bastards. By the terms of Henry VIII's will, the descendants of his older sister Margaret, Queen of Scots, were debarred from the succession to the throne. This left Jane, conveniently married to Northumberland's son, as the heiress to the throne.

A few days after the death of Edward VI, Northumberland ensured that Lady Jane Grey was accordingly acknowledged as Queen. On being informed that she was now Queen of England, Jane was deeply troubled:-"Which words being spoken to me thus unexpectedly, put me in great perturbation and greatly disturbed my mind-as yet soon after they oppressed me much more." She was lead, trembling, to the Chamber of State, where Northumberland proclaimed her Queen. Jane was eventually persuaded to accept the crown on 9th July, 1553. She was then fifteen years old.

Jane proved to be stubborn in the matter of having her husband named King, although she claimed to be happy to make him Duke of Clarence. The immature Guildford sulked and complained vociferously to his mother but Jane, as obstinate as any Tudor, could not be persuaded to change her mind.

On hearing the news of the death of her half-brother, Edward VI, the Lady Mary, Henry VIII's elder daughter, left her residence at Hunsdon and set out to East Anglia, where she began to rally her supporters. Rebellion broke out her as Mary was considered by many Englishmen to be the true heiress to the throne. It was decided by the council that Queen Jane's father, the Duke of Suffolk, should command her forces against the rebels. Jane was deeply perturbed by this decision, not wanting to be left alone in the control of Northumberland, she commanded that Northumberland instead should lead the army, a fatal decision. Although a more experienced soldier than Suffolk, he was very unpopular amongst the people.

The execution of Lady Jane Grey 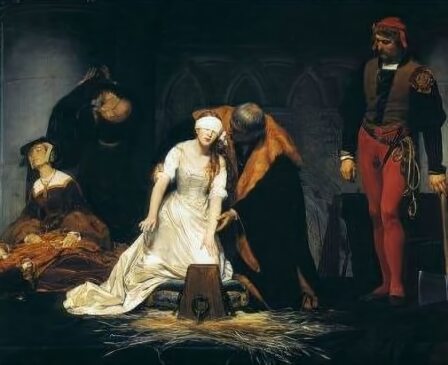 The fleet mutinied and declared for Mary. News of this disaster reached Northumberland at Cambridge. Meanwhile, in London, Queen Jane's council deserted her in panic and the cause of self-preservation called for the arrest of Northumberland in the name of Queen Mary.

Suffolk himself informed his daughter that she was no longer Queen, which he did by tearing down the canopy of estate from over her head. Jane's overall reaction seems to have been one of relief: Northumberland was taken into custody in the name of the new Queen Mary. Lady Jane and her husband Guildford Dudley were committed to the Tower of London.

The Execution of Lady Jane

Queen Mary was inclined to be merciful to the two young people, whom she correctly saw as merely tools of Northumberland's ambition. However, the rebellion raised by Thomas Wyatt and joined by Jane's father, Suffolk, sealed their fate.

The rebellion started as a popular revolt, precipitated by the imminent marriage of Mary to Phillip II of Spain and called for the restoration of Jane as Queen. Urged on by the Spanish Ambassador, Mary signed the warrants for their execution. Guildford, now eighteen, was lead out to Tower Hill on the morning of the 12th of February, 1554. Jane had sight of his decapitated body, returning from the scaffold as it was wheeled past her window in the Beauchamp Tower.

Jane, then sixteen, was to be beheaded on Tower Green, where Anne Boleyn had also met her end. She was led to the scaffold, dressed in black and pale but composed between Sir John Bridges, the Lord Lieutenant of the Tower and the Queen's Catholic Confessor, Dr Feckenham, whom she had befriended and who had asked to accompany her on this, her last journey.

Jane greeted Feckenham with the words "God grant you all your desires and accept my own hearty thanks for all your attention to me. Although indeed, those attentions have tried me more than death can now terrify me." She was required to make the traditional short speech to the crowd present to witness her death in which she admitted committing treason when she accepted the crown of England but "I do wash my hands in innocency, before God and the face of you, good Christian people this day." She wrung her hands and asked that they witness her death, that she died a good Christian. She concluded with an assertion of her Protestant faith; stating, "And now, good people, while I am alive, I pray you to assist me with your prayers." She then recited the fifty-first Psalm Miserere mei Deus (Have mercy upon me, O God) in English, while Feckenham, kneeling, followed her in Latin.

Jane Grey Inscription in the Beauchamp Tower, Tower of London 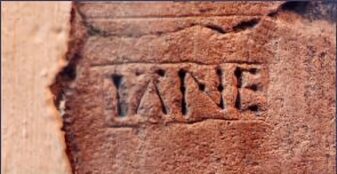 After asking God to reward the Catholic Feckenham for the kindness he had shown toward her, Jane sighted the block, at which she froze. "I pray you, dispatch me quickly," she asked the headsman. She tied a handkerchief about her eyes and put out her hands, feeling for the block, but was unable to find it. All stood silent, "What shall I do?," she cried out piteously. At last someone from the crowd of observers mounted the scaffold and lead her to the block. She lay her neck upon it and the axe came down with a deadly and sickening thud.

Dr Feckenham had to attend court for permission from the new queen for the burial. The French ambassador reported that Jane's mangled body lay exposed on the blood-stained straw for nearly four hours after. Although her attendants kept watch, though they were not allowed to cover the corpse. Jane's body was buried at the chapel of St Peter ad Vincula, within the tower, where she lies alongside two previous queens of England who ended their lives on the block, Anne Boleyn and Catherine Howard.

Her mother, Frances Brandon, first cousin to Queen Mary, made no plea for her daughter's life and Jane's father already awaited execution for his part in the Wyatt rebellion, he went to the block a week after his daughter, on 19 February, 1554. Frances Brandon later created a scandal in court by marrying her master of the horse, Adrian Stokes.