Richard Neville, 16th Earl of Warwick was born on 22nd November 1428, probably at Bisham, Berkshire, and was the firstborn son of Richard Neville, Earl of Salisbury, himself the son of Ralph Neville, Earl of Westmorland and Joan Beaufort, illegitimate daughter of John of Gaunt, Duke of Lancaster, the third surviving son of King Edward III. Gaunt later married Joan's mother, his long term mistress, Katherine Swynford and the issue of the marriage were legitimized by Richard II. Richard's mother was Alice Montacute, daughter and heiress of the Earl of Salisbury. The Neville family had been powerful in the north of England for centuries, and gradually increased their wealth and prestige through advantageous marriages. 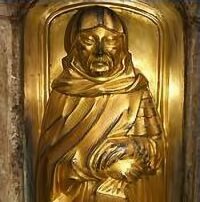 The Wars of the Roses

Warwick's aunt, Cecily Neville was married to Richard Plantagenet, Duke of York, who rose in rebellion against his cousin Henry VI, Warwick followed his father, the Earl of Salisbury in support of the Yorkist claim to the throne and after the victory at the First Battle of St. Albans in 1455, was appointed Captain of Calais. When forces loyal to the king sacked Ludlow after the Battle of Ludford Bridge in 1459, Warwick fled to Calais, returning to England in 1460 where he achieved victory over the Lancastrian forces at Battle of Northampton but tasted defeat at the Second Battle of St. Albans.

The Lancastrian queen, Margaret of Anjou, sent a large force of around 6,000, led by the Duke of Somerset and Lord Clifford, to attack York and Warwick's father, Salisbury at Sandal Castle where they were celebrating the Christmas season. In the resulting Battle of Wakefield, York impulsively led his army down from the castle and into a trap. Two large forces of the Lancastrian army, commanded by the Earl of Wiltshire and Lord Roos, emerged from nearby woods and the jaws of the trap snapped shut on the Yorkist leader. The Duke of York was killed in the ensuing slaughter. His son Edmund, Earl of Rutland was killed whilst in the course of fleeing the battle, Salisbury was captured and executed. Their severed heads were displayed at York, that of York himself decorated in derision with a paper crown.

The new leader of the Yorkist cause was now Richard of York's nineteen-year-old son, Edward, Earl of March whom Warwick joined forces with in London. A large Lancastrian army proceeded towards London, which was met by Warwick at the Second Battle of St. Albans. Elaborate defences of caltraps, spiked nets and various traps were set up in anticipation of the arrival of the Lancastrian army. However, the attack did not materialise as Warwick had envisaged. The Lancastrian vanguard entered St Albans from the direction of Dunstable and pursued the Yorkist rearguard in retreat from the town. The main body of the Yorkist army was then attacked from the flank and the rear. Warwick marched west to join forces with the approaching Yorkist army under Edward, leaving London undefended. The citizens of London refused to open the gates to the Lancastrians forcing them to withdraw north to Yorkshire. The Battle of Towton, a bitter blood bath fought in a fierce snowstorm, proved to be a decisive Yorkist victory. The victorious Edward made a state entry into London in June and was crowned King Edward IV of England at Westminster Abbey.

For the first three years of Edward IV's reign, Warwick was the virtual ruler of England. A popular figure with the people due to his naval victories off Calais and the captured Spanish and Genoese ships he brought into the city, any Londoner who was acquainted with his servants was allowed to take as much meat from his kitchens as he could carry on a dagger. 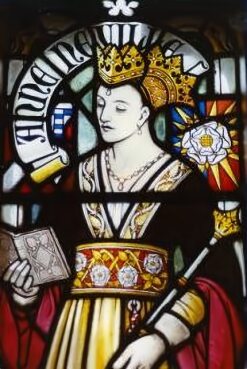 The seeds of discord were sown when Warwick attempted to negotiate a marriage alliance with France for Edward for the hand of Bona of Savoy, only to discover on his return that the king had secretly married Elizabeth Woodville, the widow of Sir John Grey, a Lancastrian knight. Elizabeth, who proved to be avaricious and grasping, quickly persuaded her besotted spouse to arrange advantageous marriages amongst the nobility for her large and needy family. Deeply offended, the proud and haughty Warwick came to detest the new queen.

Edward's brother, George, Duke of Clarence also heartily disliked the new Queen. Warwick, who possessed influence over George and under whom he had been brought up, wished to arrange a marriage between him and his eldest daughter and co-heiress, Isabel Neville. The King refused to sanction the match, in defiance of his brother, Clarence married Isabel at Calais. Further ill-feeling and suspicion being engendered on both sides culminated in Warwick and Clarence's open revolt, Edward's forces were defeated by them at the Battle of Edgecote Moor in 1469, and the king himself captured and imprisoned at Warwick Castle. Warwick attempted to rule England in Edward's name, but a counter rebellion forced the king's release.

Although pardoned, Warwick and Clarence incited a further rebellion in Lincolnshire under the leadership of Robert Welles, Viscount Welles, was crushed by Edward at the Battle of Losecote Field. Warwick and Clarence promptly took ship for Calais with the countess of Warwick, Anne Neville, and the heavily pregnant Isabel, Duchess of Clarence, promptly fled the country. Isabel's child was stillborn and buried at sea. 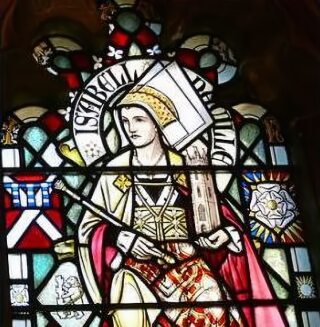 He invaded England on Margaret's behalf in 1470, resulting in the flight of Edward IV to Burgundy and the release of Henry VI from the Tower of London and his brief re-instatement as king. A sad and pitiful figure, he was paraded through the streets of London in a shabby blue gown by George Neville, Archbishop of York and set up as a puppet King, whom the ambitious Warwick ruled through. Edward IV, backed by the Duke of Burgundy, returned in 1471, meeting Warwick's forces at Barnet. Having no longer anything to gain from the outcome of the battle, George, Duke of Clarence, Shakespeare's 'quicksand of deciet' was reconciled with his brother Edward, deserted his father-in-law and took his considerable forces into the ranks of the the Yorkists.

A thick mist descended prior to the Battle of Barnet, obscuring sight of the enemy, resulting in both army's being incorrectly aligned, with their right wings overlapping. The royal army duly advanced, the right-wing outflanking Warwick's left. The same situation arose with the royal left wing, which was similarly outflanked and routed by Warwick's right, commanded by the Earl of Oxford, an excellent general. The King managed to deploy his reserve and attacked Warwick in the centre. Oxford, who had been engaged in the pursuit of the fleeing Yorkists, returned to the battle, due to the thick mist, Montague's men mistook Oxford's banner for the Yorkist sun in splendour and opened fire on them. Oxford's contingent fled and the rebels were routed.

Warwick's brother, John, Marquess Montagu, was killed in the course of the battle and according to the official version of the battle, the mighty Warwick himself was killed fleeing the field in an attempt to reach his horse. Probably the most likely method of his despatch was a sword thrust into his throat, after forcing open his visor. A wound on the left side of his neck is depicted in an illustration in the Yorkist chronicle the Arrival. Edward IV's sister Margaret Duchess of Burgundy, who must have been well informed, in the course of writing to her mother-in-law a few days after the battle, states that the Earl of Warwick was captured at the end of the battle, and whilst in the course of being taken alive to Edward "some men recognised him and killed him". Warwick's body together with that of his brother, Montague was later displayed at St. Paul's covered only with a loincloth, before being buried at Bisham Priory in Berkshire. During the Reformation, much of Bisham Abbey was destroyed on the orders of King Henry VIII and the tomb of Warwick destroyed.

Warwick's younger daughter, Anne Neville, following the death of her first husband, Edward Prince of Wales, was married to Edward IV's youngest brother, Richard, Duke of Gloucester. When her husband later ascended the throne as Richard III, Anne Neville became Queen of England. Warwick's grandson, Edward, Earl of Warwick, the son of his elder daughter Isabel and George, Duke of Clarence was to be the last male-line Plantagenet, after being held prisoner in the Tower of London for most of his life, was executed by Henry VII due to his closeness to the throne in 1499.

The Ancestry of Richard Neville, Earl of Warwick