The Battle of St. Albans

In 1453, at the age of thirty two, King Henry VI began to exhibit signs of serious mental illness. By means of a "sudden fright" he entered into a trance-like state reacting to and recognising no one. Catatonic schizophrenia or depressive stupor have been suggested as a likely diagnosis of the king's condition. 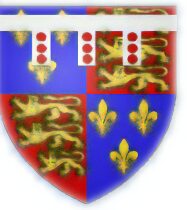 Henry's cousin, Richard, Duke of York, the richest magnate in the land and considered by some to be the rightful heir to the throne, was appointed protector, to the annoyance of the Queen, Margaret of Anjou, who strongly felt that she and her party should govern England.

An intense personal rivalry developed between Richard of York and Margaret's favourite, Edmund Beaufort, Duke of Somerset. York despised Somerset due to the favouritism given to him by the King, despite his incompetence. He strongly felt that Somerset was largely responsible for the English losses in France and that he should be removed from office and tried for treason.

Henry recovered his senses by Christmas of 1454, and York's former position as the Captain of Calais was given to the Duke of Somerset. York, dismissed from office, was discontented. His position, he realised, was now a precarious one, exposed as he was to the suspicion and venom of the Queen, who once again controlled the government. A great council was called at Leicester, which was packed by Somerset's supporters. York and his allies, Richard Neville, Earl of Warwick and his father, Richard Neville, Earl of Salisbury, suspecting unimpartial treatment, traveled south with an army. Attempts of discussion between the factions evoked further anger on both sides.

Arms of Warwick the Kingmaker 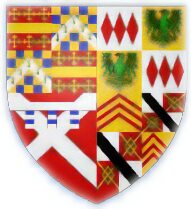 King Henry VI gathered an army which his cousin, Edmund Beaufort, Duke of Somerset was given command of, and included Henry Percy, Earl of Northumberland, Thomas Clifford, Lord de Clifford and Thomas Courtenay, Earl of Devon.

The king's forces marched north to confront the rebels. Surprised by the speed of York's advance, on the morning of 22 May, Henry ordered his men to occupy the fortified town of St. Albans. The more neutral Duke of Buckingham was placed in charge of the royal army in place of the Duke of Somerset and Henry's royal standard was raised in the Market Square.

Soon after, York's army arrived outside St. Albans and began to deploy to the east of the town, setting up camp in Key Field. Neither Henry nor his cousin York was eager to engage in combat. York protested his loyalty to the King and wished his name to be cleared and certain of Henry's advisors removed. Badly outnumbered by the Yorkists, Henry and Somerset wished to escape from their weak position. Much of the morning was therefore spent in negotiations. After three hours of talks, York proved unable to convince Henry of his peaceful intentions and the King became increasingly angry regarding the Duke's demands.

As midday approached, the Duke of York, weary of the stalemate, ordered an attack on St. Albans via the Sopwell and Shropshire Lane gates. The advancing Yorkists discovered both gates into the town barricaded by Henry's forces. Repeated assaults failed to break through the barricades and casualties began to mount.

The Earl of Warwick led the Yorkist reserves to find another way into the town. Finding an unguarded dirt track, he made an entry and with cries of 'A Warwick! A Warwick!' approached the marketplace where they clashed with the Lancastrian reserves, who were taken totally by surprise.

A fierce battle ensued, as the market place and surrounding streets became crowded soldiers. Warwick quickly overcame the Lancastrian forces, who began to flee. His archers were ordered to fire at the men surrounding the king, killing several and wounding the king himself in the neck. Two rival peers were hacked to death in front of the king in Holywell Street and Henry VI himself was captured and was taken to a nearby cottage to have his wound dressed.

As the battle continued through the streets of St.Albans, Edmund Beaufort, Duke of Somerset, Thomas Clifford, Henry Percy, 2nd earl of Northumberland, Sir Robert Vere, Sir William Chamberlain, Sir Richard Fortesque and Sir Ralf Ferrers were all slain. A plaque at the corner of St Peter's Street and Victoria Street in St. Albans today marks the position of the Castle Inn where Somerset was slain. The battle had lasted no more than half an hour, York, Salisbury and Warwick went to Henry and on their knees, swore they meant no harm and wanted only to save him from those who would harm him, the following day, they escorted the king back to London with every mark of respect.

The First Battle of St. Albans marked the opening of the dynastic conflict now known as the Wars of the Roses, with the king in his custody, York reclaimed his position at court and was made Lord High Constable of England in place of Somerset.