The founder member of the powerful Percy family in England was William de Percy who lived circa. 1030-96 and was the son of Alan de Percy. Alan Percy was said to be descended from Geoffrey, son of the Danish chieftain Manfred who, in 912, aided Rolf the Ganger in conquering Normandy.

William de Percy, also known as Al Gernons due to his custom of wearing whiskers, (his descendants were later to adopt the nickname as a Christian name Algernon) was a supporter of William the Conqueror, and arrived in England shortly after the Norman Conquest, possibly in 1067. The family's chief seat in Normandy was at a place called Perci and according to tradition, they derived their name from their property. 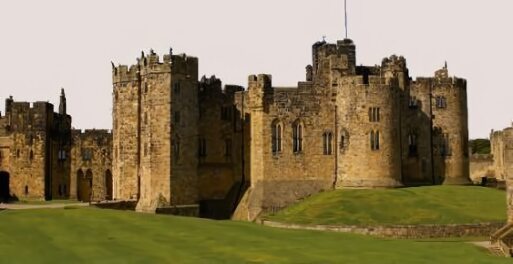 Following the rebellion of the Saxon Gospatric Earl of Northumbria, and the subsequent Harrying of the North, in reward for his services in aiding the King in this devastation, William de Percy was granted a barony as well as large tracts of land in Lincolnshire, Yorkshire, Nottinghamshire and Huntingdonshire. At the time of the Domesday Book of 1086, Percy owned as a tenant-in-chief, a hundred and eighteen manors in Lincolnshire and the North Riding of Yorkshire, with further lands in Essex and Hampshire. William de Percy died near Jerusalem during the First Crusade. His heart however was to be brought back to Yorkshire and buried at Whitby Abbey where his brother, Serlo de Percy was Abbot.

William's grandson, another William de Percy (d. 1175) was the last of the house in the direct line, leaving two daughters and coheiresses, Maud, who died childless, and Agnes. Agnes de Percy married Josceline de Leuven, half brother of Adelicia of Louvain, the second wife of Henry I, their descendants took the name of Percy.

Henry de Percy, Baron Percy (1273-1314), a descendant of Agnes de Percy and Josceline de Leuven and the posthumous son of Henry de Percy, 8th Baron Percy, fought with Edward I in his wars in Wales and Scotland and was knighted at Berwick by the king. He was later granted the Scottish estates of Ingram Balliol. Later, as one of the lords ordainer, he supported the baronial rebellion against King Edward II. Hitherto the family had been mainly connected with Yorkshire, but Henry gave its fortunes a new direction by his purchase of lands in Northumberland. Due to several purchases of lands, the Percies became the greatest landowners in Northumberland. Among Percy's purchases was the barony of Alnwick, which contained the then modest fortress of Alnwick Castle. He rebuilt Alnwick as the magnificent castle it is today and it became the Percy family seat. 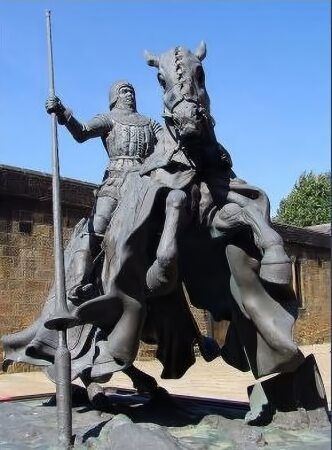 His son Henry Percy (circa 1321–1368), was sixteen when he inherited his father's estates, he married Mary of Lancaster the daughter of Henry Plantagenet, 3rd Earl of Lancaster and in 1346, commanded the English right-wing at The Battle of Neville's Cross when David II, King of Scots was taken, prisoner. His son, another Henry Percy (1341–1408) was created Earl of Northumberland at the coronation of Richard II in 1377. However, in 1398 he threw his support behind the rebellion of the king's cousin, Henry of Bolingbroke, who was later crowned King Henry IV. His son, Sir Henry Percy, known as Harry Hotspur, one of the most famous of the family, was killed at the Battle of Shrewsbury in 1403 while in rebellion against Henry IV. Henry Percy, Earl of Northumberland himself was attainted in 1406 for plotting against Henry IV and killed at Bramham Moore in 1408.

In the early 1450s, the relationship between the Percy family and a cadet branch of the Neville family deteriorated into a bitter feud between the two great families. The conflict was triggered by the marriage of Thomas Neville, the son of Richard, Earl of Salisbury and Maud Stanhope, niece and heiress of Ralph, Lord Cromwell. By the marriage Wressle Castle, which had traditionally been a Percy possession, passed to the Nevilles. Thomas Percy, Baron Egremont, a younger son of Northumberland, along with a force of around 700 men, attacked the Neville-Cromwell wedding party at Heworth near York on 24th August 1453. There were no fatalities in the skirmish but ill feeling caused the conflict to escalate over the following years. On 8 October, both Northumberland and Salisbury were summoned to court by Henry VI and ordered to put an end to their feud. Such was the intensity of feeling, however, that the warning fell on deaf ears, the collective forces of the Percy and Neville families gathered at their Yorkshire strongholds of Topcliffe and Sand Hutton respectively. Both sides had ignored royal commands to disband, and battle seemed inevitable, but eventually, a truce ensued and the forces withdrew. Then, in October 1454, Thomas Percy and his brother Richard were captured by the Nevilles in battle at Stamford Bridge.

Discontent at the feeble rule of Henry VI grew after Henry had been incapacitated by mental illness in 1453, Richard, Duke of York was appointed protector in 1454. The Nevilles were allied with York through his marriage to Salisbury's sister Cicely Neville, Northumberland chose the side of the king. In December, Henry VI recovered from his illness and resumed control of the government. The opposing sides clashed on On 22 May 1455, at the First Battle of St Albans. The battle was a complete victory for the Yorkists, the king himself was taken captive. Northumberland was killed in the battle and was buried at the nearby St Albans Abbey.

Henry Percy (1421-61), the 3rd Earl of Northumberland also became embroiled in the Wars of the Roses, he fought at the Battle of Wakefield and fell at the bloody battle of Towton in 1461. The earldom was then briefly granted to John Neville but returned to the Percys in 1470 when Henry (c. 1449-89), son of the 3rd earl, was restored to the title by King Edward IV. Henry the 4th earl led a major portion of King Richard III's army at the Battle of Bosworth but failed to commit his troops. He was briefly imprisoned by Henry VII but later restored to his position. A few years later he was murdered by citizens of York during a riot over taxation. 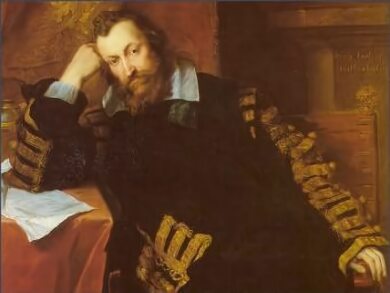 Henry Algernon Percy, the 5th Earl of Northumberland (1478-1527), was brought up at the court of Henry VII and was prominent during the early years of Henry VIII. Henry (c. 1502-37), the 6th earl, is famous for his betrothal to Anne Boleyn, probably in the spring of 1523, when he served as a page to Wolsey. His father, when summoned to court, refused permission for the match and he was swiftly and unhappily married to Lady Mary Talbot, daughter of the Earl of Shrewsbury. In May 1536 he was called to act as one of the jury in the trial of Anne Boleyn. Anne is said to have confessed a pre-contract with him in the hope of saving her life. He collapsed after the verdict was read out and had to be carried out.

Northumberland's brother was attainted for his role in the rebellion known as the Pilgrimage of Grace (1536). In a poor state of health, the Earl made a grant to the king of his estates, on condition that they might pass to his nephew. When, however, his brother, Sir Thomas, was attainted and executed, he made the grant unconditional in June 1537.

The Earldom of Northumberland was restored to Thomas Percy's son Henry Percy, the 8th earl, who suspected of pro-Catholic plotting, was imprisoned in the Tower of London, where he was found shot in 1585. He was buried in the Chapel of St. Peter ad Vincula, within the Tower precincts.

Henry Percy (1564-1632), known as the Wizard Earl, was imprisoned in the Tower from 1605 to 1621 on suspicion of complicity in the Gunpowder Plot, because his cousin, Thomas Percy, was one of the chief conspirators. Algernon (1602-68), the 10th earl, was opposed to the trial of Charles I and took no part in affairs under the Commonwealth and urged moderation after the Restoration. On the death of his son, Joceline (1644-70), the 11th earl, the male line of the Percys of Northumberland became extinct.

Joscelin's daughter, Lady Elizabeth Percy, deemed Baroness Percy in her own right married Charles Seymour, 6th Duke of Somerset, their son Algernon Seymour, 7th Duke of Somerset was succeeded by his daughter Elizabeth, 2nd Baroness Percy (1730 - 5 December 1776), who married Sir Hugh Smithson, who later succeeded to the title 2nd Earl of Northumberland by right of his wife and was created 1st Duke of Northumberland. Their descendants, who took the surname of Percy, live at Alnwick to the present day.