Constance of Castile , Duchess of Lancaster

Constance of Castile , Duchess of Lancaster 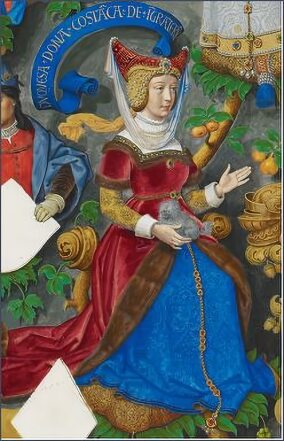 King Pedro had first met Constance's mother María, a Castilian noblewoman, in the summer of 1352 during an expedition to Asturias to fight his illegitimate half-brother Henry of Trastamara. They were probably introduced to each other by her maternal uncle, Juan Fernández de Henestrosa. María was being brought up at the house of Isabel de Meneses, wife of Juan Alfonso de Alburquerque. Pedro made claims to have formerly married Maria before Constance's birth which made her his legitimate daughter and heir to the Castilian throne. On 3 June 1353, he had married Blanche of Bourbon and three days after their wedding, causing a scandal, he abandoned her and returned to Maria. Constance had three siblings, Beatrice, born in 1354, Isabella born 1355, and Alfonso, crown-prince of Castile, who was born in 1359 but died in infancy. Their relationship lasted until Maria's death in July 1361, possibly of bubonic plague.

Pedro's notorious cruelty led to his being overthrown by his illegitimate half-brother Henry of Trastamara. Pedro fled to Gascony with his daughters, to enlist the aid of Edward, the Black Prince, the eldest son and heir of Edward III of England. Edward agreed to assist him to regain the Castilian throne but insisted Constance and her sister Isabella being held by the English. Following his victory at the Battle of Nájera, the Black Prince restored him to his throne but became sickened by Pedro's untrustworthy and ferocious nature, as well as his failure to keep his promise to repay the large costs of the campaign.

Pedro gave Edward a large ruby, now known as the Black Prince's Ruby, it forms part of the crown jewels. With his health deteriorating, the Black Prince returned to England. In 1369, Peter was murdered by his half-brother, Henry of Trastamara, who promptly took the throne of Castile.

Pedro 'the Cruel' of Castille 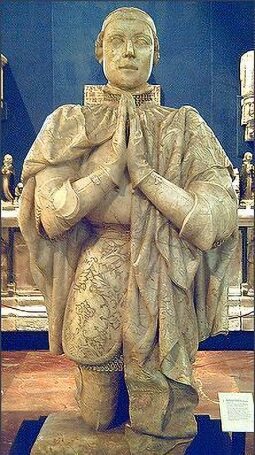 On 9 February 1372, Constance made a ceremonial entry into London as Queen of Castile, accompanied by Edward, the Black Prince, she proceeded to the Savoy Palace in the Strand where she was received by John of Gaunt, who now proclaimed himself King of Castile and León. The marriage of John and Constance produced two children, Catherine of Lancaster (31 March 1373 - 2 June 1418) and John Plantagenet, who died in infancy. Following his marriage to Constanza, John's fate was inextricably interwoven with that of the Iberian peninsula. Under Spanish law, the husband of a female heir to the throne was the rightful king, John impaled his arms with those of Castille and in 1386, he left England in an attempt to claim the Castillian throne in right of his wife.

John of Gaunt set sail for Spain on 9 July 1386 with a large fleet, accompanied by Constance and his daughters and landed at Corunna in northern Spain on 29 July. The reigning King of Castile, Constance's cousin, John of Trastamara, who had succeeded his father Henry II in 1383, had positioned his army on the Portuguese border, expecting Gaunt to land there. From August until October, John of Gaunt set up his court at Ourense and received the submission of the Galician nobility and most of the towns of Galicia but had difficulty keeping his army together and paying his soldiers.

He met with John I of Portugal in November at Ponte do Mouro on the south side of the Minho River where they made plans for a joint invasion of central Castile early in 1387. The alliance between England and Portugal was cemented by the marriage of King John I of Portugal to Gaunt's eldest daughter, Philippa of Lancaster. However, a large section of John of Gaunt's English army had succumbed to illness and when the invasion was finally embarked upon, they were far outnumbered by the Portuguese. The campaign which took place from April to June 1387, met with failure. Many hundreds of English soldiers died of disease or exhaustion and Gaunt was forced to withdraw to Portugal. Following this defeat he accepted the proposal of King John I of Castile, to marry Catherine of Lancaster to his son, the future Henry III of Castile, providing that Constance, Duchess of Lancaster, should renounce all claims to the Castilian throne in return for a large annual payment. A final treaty regarding this arrangement was ratified at Bayonne in Gascony on 8 July 1388. The couple were later married at Palencia Cathedral.

Constance, Duchess of Lancaster died at Leicester Castle on 24 March 1394 at the age of forty and was buried at Newark Abbey in Leicester. John of Gaunt later married his mistress Katherine Swynford, the mother of his four Beaufort children who had been fathered during his marriage to Constance.

The Ancestry of Constance of Castile