The Battle of Blore Heath

Following the Yorkist victory at First Battle of St Albans and the capture of the Lancastrian King Henry VI by his overmighty subject Richard, Duke of York in 1455, a time of uneasy peace and mutual distrust and suspicion gripped the Houses of York and Lancaster.

Plan of the Battle of Blore Heath 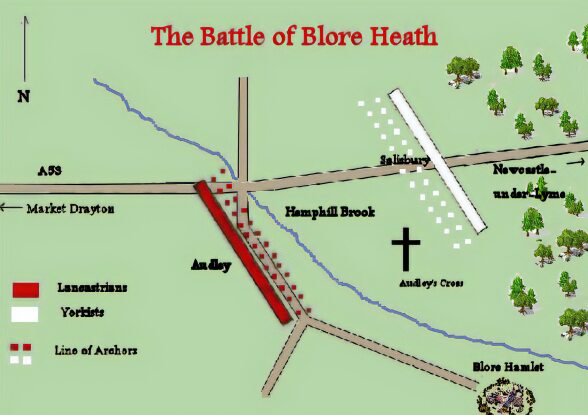 Henry VI's antagonistic queen, Margaret of Anjou raised support for her husband and the Yorkist Richard Earl of Salisbury, brother-in-law of the Duke of York, advanced from his base at Middleham Castle in Yorkshire to join with the main Yorkist army under York's eldest son, Edward Earl of March at Ludlow Castle in Shropshire, Salisbury's son, Richard Neville, Earl of Warwick, was marching from London to Warwickshire. with a Yorkist force.

Queen Margaret, then at Eccleston in Cheshire, determined to crush the Yorkists, ordered James Tuchet, 5th Baron Audley, to intercept Salisbury as he marched through the Midlands.

Audley, along with a force of around 10,000 men, halted at Blore Heath, an area of barren and marshy moorland about two and a half miles from Market Drayton. On the morning of 23 September 1459, he took position near the Market Drayton to Newcastle-under-Lyme road, in an attempt to ambush Salisbury's forces. Salisbury and his force were approaching along the road en route to market Drayton with the king and his additional forces close behind in pursuit.

Salisbury, accompanied by a force of around 5,000, had been warned of the Lancastrian position by his scouts who had spotted the Lancastrian banners protruding above a hedge. On emerging from woodland, Salisbury hastily positioned his troops in battle lines, just out of range of the Lancastrian archers. Fearing defeat, the outnumbered Yorkist soldiers are said to have kissed the ground beneath their feet, in the assumption that this would be the place of their deaths.

Memorial Stone at the Battlefield 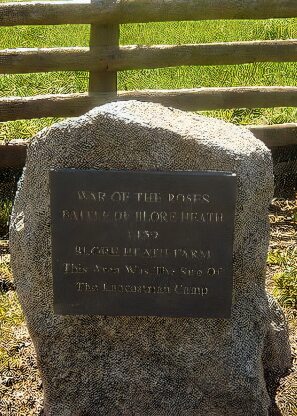 After an unsuccessful parley between Salisbury and Audley, the battle commenced with archers from both sides releasing a hail of arrows on the enemy, which proved largely ineffectual due to the distance between the two armies. The steep-sided and fast-flowing Hemphill Brook ran between the opposing sides. Aware that an attempted attack across the brook would be foolish, Salisbury used a ruse to encourage the Lancastrians to launch just such an attack and ordered the centre of his army to feign to withdraw just far enough to fool the Lancastrians into believing them to be retreating. The ruse worked and the Lancastrians charged. Salisbury then ordered his men to turn back and attack them as the Lancastrians made attempts to cross the brook, resulting in heavy Lancastrian casualties.

The Lancastrians, although initially forced to withdraw, then made a second more successful assault, with many of them succeeding in crossing the brook. Audley himself was slain in the close hand-to-hand fighting which ensued, possibly by Sir Roger Kynaston of Myddle and Hordley, who later incorporated emblems of the Audley coat-of-arms into his own.

John Sutton, Lord Dudley, second-in-command of the Lancastrian army, ordered an attack on foot with some 4,000 men, however, this attack also met with failure when around 500 Lancastrians suddenly joined the enemy and began attacking their comrades and Dudley himself was taken, prisoner. All remaining Lancastrian resistance then began to collapse and the Lancastrianlines broke as men began to flee. The merciless rout by the Yorkists continued throughout the night, with the Yorkist troops pursuing the fleeing enemy for miles across the countryside.

The Earl of Salisbury camped at Market Drayton before continuing to Ludlow Castle. He held concerns about Lancastrian forces in the region and therefore paid a local friar to fire a cannon on the battlefield through the night to feign that the battle was continuing.

Legend states that Queen Margaret of Anjou watched the battle from the nearby Mucklestone church tower, and fled when she realised her army had lost. The advantage gained by the Yorkists was short-lived as but three weeks later York deserted his army at Ludford Bridge and fled to Ireland. Salisbury and Warwick fled to Calais and the Yorkist army surrendered to the king.

Lord Audley was buried in Darley Abbey in Derbyshire. A cross was erected at Blore Heath after the battle to mark the spot where Audley was slain, which was replaced with a stone cross in 1765.

The First Battle of St. Albans PreviousNext The Battle of Ludford Bridge