The Battle of Ludford Bridge

Following the First Battle of St Albans in 1455, Richard, Duke of York had rid himself of many of his enemies, however, the Queen, Margaret of Anjou, fiercely protective of her infant son, Edward of Westminster, Prince of Wales, strongly suspected that York ultimately planned to supplant him in the succession and an atmosphere of distrust and suspicion reigned.

Henry VI made efforts to maintain peace in the realm. In 1458 he arranged for the main protagonists to undergo a public reconciliation - the 'Loveday' of 24 March 1458 in which York, Salisbury and Warwick publicly made peace with the heirs of their enemies Northumberland, Somerset and Clifford. 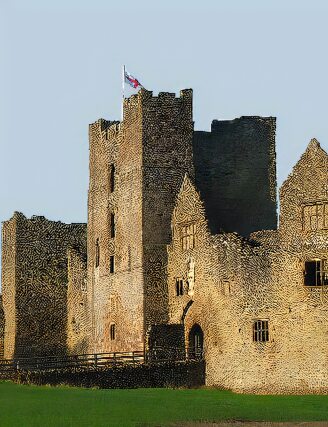 The agreement arranged for cash compensation to be paid to the bereaved families of St. Albans and the establishment of chantries for the dead paid for by the Yorkists. A service of thanksgiving was held at St Paul's from which York emerged arm-in-arm with the Queen, and Warwick with Somerset.

However, Queen Margaret continued to fear for her son's inheritence and continually plotted against York and his chief supporters the Nevilles whom she increasingly viewed as a threat.

Richard Neville, 16th Earl of Warwick, held the post of Captain of Calais, and in late 1458, he had attacked on merchant ships from Lübeck and Spain. Although his actions were popular among the merchants of London and Kent, they infuriated Margaret and the royal court.

Warwick was summoned to London to explain himself before the King's council, at which Warwick claimed that his life had been threatened, and returned to Calais leaving the charges unanswered. Margaret interpreted this as open defiance of her husband, King Henry VI's authority.

The king summoned a council at Coventry on 24 June. York, his brother in law Richard Neville, 5th Earl of Salisbury and Warwick fearing their arrest for treason, refused to attend. York, based was based at his castle at Ludlow in the Welsh Marches, Salisbury was at Middleham Castle in North Yorkshire and Warwick was at Calais. As Salisbury and Warwick marched to join York, the queen ordered James Tuchet, 5th Baron Audley to intercept Salisbury, who was defeated by Salisbury at the Battle of Blore Heath. Audley perished in the battle.

Salisbury then succeeded in evading two other Lancastrian armies and joined York at Ludlow, where they were also joined by Lord Grey of Ruthyn and Walter Devereux. The Yorkist army attempted to move towards London but discovered their path had been blocked by a much larger Lancastrian army with King Henry himself nominally at its head and withdrew to Worcester. From there York dispatched written protestations of his loyalty to Henry claiming he opposed only the 'evil councillors' around the king. Henry responded with a pardon to those who would join him within six days with the exception of those responsible for the death of James Tuchet, Baron Audley at Blore Heath. Since the king's exception included his brother-in-law, Salisbury, and could be interpreted to extend to himself, York retreated to Ludlow and made a stand near Ludford in Shropshire on 12 October. 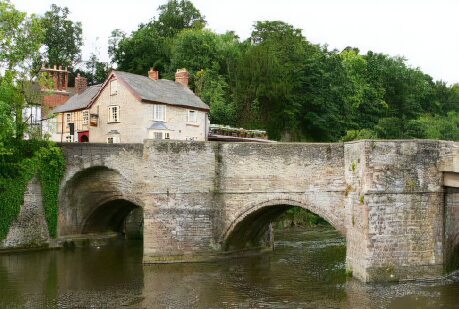 York, who was heavily outnumbered by the Lancastrians, with an army estimated to be only a third of the size of the king's, ordered his troops to dig a defensive ditch in a field on the opposite side of the river from Ludlow, near the picturesque bridge from which the battle derives its name. Ludlow lies on the north bank of the River Teme. The town occupied a bend in the river. The main bridge across the Teme was situated at the southern side of the town and led to Ludford.

Barricades of carts containing cannon were also set up at Ludford Bridge, in a further defensive manoeuvre, but morale in the Yorkist army was low. Andrew Trollope, an experienced soldier, had been brought by Warwick from Calais and during the night, he and his force of around 600 defected to the Lancastrian side.

On receiving news of Trollope's treachery, York, Salisbury and Warwick, who had now lost their most experienced commander, crossed the bridge into Ludlow, ostensibly to seek refreshment but they instead abandoned the battlefield and fled. York, with his second son the sixteen-year-old Edmund, Earl of Rutland, went to Wales, and from there crossed to Ireland. Salisbury, Warwick and York's eldest son Edward, Earl of March fled to the West Country where they acquired a ship and sailed for Calais.

At dawn on 13 October, the Yorkist troops knelt in submission before the king and received a pardon. York's wife Cecily Neville, Duchess of York, along with his two younger sons, George and Richard were taken captive at the Ludlow Market Cross. They were placed in the care of the Duchess's sister Anne, wife of Humphrey Stafford, the 1st Duke of Buckingham, was loyal to the queen. Ruthyn and Devereux submitted to the king the day after York's defection.

The king and his army then returned to Coventry, where a Parliament attainted York, Salisbury and Warwick. James Butler, The 5th Earl of Ormond was appointed to York's position of Lieutenant of Ireland but found it difficult to muster troops to oust York from Ireland. Henry Beaufort, 3rd Duke of Somerset launched two attacks on Calais to attempt to wrest the garrison from Warwick but both met with failure.