Cecily Neville, known as the 'Rose of Raby', was the youngest of the fourteen children of Ralph Neville, Earl of Westmorland and Joan Beaufort. She was born at the Neville stronghold of Raby Castle in Durham on 3 May 1415. Joan Beaufort was the legitimate daughter of John of Gaunt, 3rd surviving son of Edward III.

When Cecily was but nine years old, she was betrothed to her father's thirteen-year-old ward, Richard Plantagenet, Duke of York. The pair were married in 1429 when Cecily had reached fourteen. In 1438 at age 23, Cecily gave birth to her first child, Joan, who died in infancy. She was later to have twelve more children. The Duke of York possessed a slightly better claim to the throne than the king, Henry VI, himself, he was the descendant of two other sons of Edward III, Lionel of Antwerp, Duke of Clarence, Edward's second surviving son and Edmund of Langley, Duke of York, the fifth son. When Henry VI succumbed to a bout of insanity, his kinsman Richard of York was appointed Lord Protector of the Realm.

Two months later, Queen Margaret of Anjou gave birth to a son, Edward of Lancaster. Rumours abounded, fed by the Yorkists, that the child was not the feeble-minded King's but the Duke Somerset's. The Queen, 'a strong laboured woman', was fiercely protective of her son and his rights. Henry eventually recovered his senses and when showed his son, declared himself pleased and enquired about the Child's godfathers. Adding to existing doubts about the child's paternity, he declared that Edward must have been fathered by the Holy Ghost.

York, dismissed from office, was discontented. His position, he realised, was now a precarious one, exposed as he was to the suspicion and venom of the Queen, who once again controlled the government. York, his brother-in-law and supporter Richard Neville, Earl of Salisbury and his nephew Richard Neville, Earl of Warwick gathered an army. The king and Somerset met the combined Yorkist forces at the town of St. Albans on 22nd May 1455. Margaret's favourite and York's hated rival, Edmund Beaufort, Duke of Somerset was killed during the battle and Henry, who had been wounded by an arrow was captured and returned to London by the victorious Yorkists. York was again appointed Protector of England.

Margaret, true to character, was not going to accept this meekly. She gathered an army to advance her son's cause and York, Salisbury and Warwick were forced into flight before her. Cecily remained at Ludlow Castle and continued to work for the Yorkist cause. She pleaded for her husband at a parliamentary debate concerning his fate in November 1459. Richard of York's lands estates were confiscated, but Cecily managed to gain an annual grant of £600 to support herself and their children. 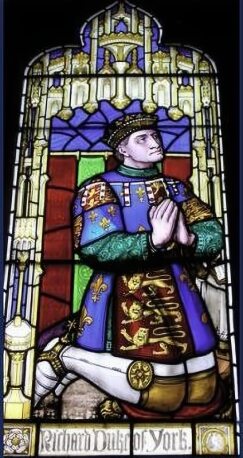 The rebel lords gathered support and in retaliation took London. Warwick met the forces loyal to the king at Northampton, defeated them, and took the unfortunate Henry captive back to London. York returned from exile and laid a formal claim to the throne. When asked why he had not previously done so, he responded that "though right for a time lies silent, yet it rotteth not, nor shall it perish." A compromise was agreed on, whereupon Henry VI was to keep the throne for the rest of his life but the succession was to go to York and his heirs. No one for a moment expected that the spirited Margaret would accept the disinheriting of her son and this proved to be the case.

Margaret of Anjou attempted to gain the support of James III, King of Scots, York and Salisbury headed north to meet the threat, arriving at Sandal Castle, a few miles to the south of Wakefield on 21 December, where they intended to spend the Christmas season. The Lancastrian forces which had regrouped under the leadership of Somerset and the Earl of Northumberland advanced on them.

Instead of awaiting reinforcements, York led an impulsive charge on the Lancastrians. Two large forces of the Lancastrian army, commanded by the Earl of Wiltshire and Lord Roos, emerged from nearby woods and the jaws of the trap snapped shut on the Yorkist leader. The Duke of York was killed in the ensuing slaughter known as the Battle of Wakefield, as was his seventeen year old son, Edmund, Earl of Rutland, who was killed whilst fleeing the battlefield over Wakefield Bridge, his pleas for his life being ignored. Salisbury was captured during the battle and conveyed to Pontefract Castle where he was executed. The Queen had their heads impaled on spikes on the city walls of York, York's wearing a paper crown in derision.

After sending her younger sons George aged eleven and Richard, eight, to the safety of the court of the Duke of Burgundy, Cecily remained at Baynard's Castle in London, which effectively became the Yorkist headquarters, to support her eldest son Edward, now Duke of York. After defeating the Lancastrians with the aid of his cousin Richard Neville, Earl of Warwick at Mortimer's Cross in February 1461, Edward, was crowned King Edward IV and his young brothers returned to their mother's care.

Warwick was in the process of negotiating with the French king for the hand of Bona of Savoy for Edward when the king revealed that he had secretly married Elizabeth Woodville, the impoverished widow of a Lancastrian knight in 1464. Cecily was furious while the proud and haughty Warwick simmered at his humiliation. Further frustrated by Edward's social advancement of the Queen's many needy relations, Warwick, and Cecily's son, George, Duke of Clarence, switched their allegiance to the House of Lancaster. Warwick married his elder daughter, Isabel, to George and his other daughter, Anne Neville, to Henry VI's son, Edward, Prince of Wales. A rumour began to circulate that Edward was illegitimate, the son of Duchess Cecily and an archer by the name of Blaybourne with whom it was said, she had indulged in an affair when the Duke of York was stationed at Rouen, which would have made Clarence the rightful King of England. Cecily seems to have said little on the matter in public, but travelled to Sandwich, intending to reconcile her warring sons.

In recent years, research into the issue of Edward's possible illegitimacy has revealed that from 14 July to 21 August 1441, the approximate time of Edward's conception, Richard, Duke of York, was on campaign at Pontoise which was several days' march from Rouen, where Cecily lodged. Adding weight to this theory, the christening celebration of Edmund, Earl of Rutland, the second son of Richard and Cecily, was a lavish affair, while the christening of the couple's firstborn son Edward was a low-key ceremony in a small chapel in Rouen.

Warwick, allied to Margaret of Anjou, invaded England and reinstated Henry VI on the throne for a short period (October 1470 - April 1471) However, Edward regained his throne and Warwick was slain at Barnet in 1471. The festering ill-feeling between Edward and his brother George was never really healed, for, in 1478, George was condemned to death for treason. Cecily appealed to Edward that his execution should not be a public spectacle and he is said to have been drowned in a butt of malmsey wine in the Tower of London in February 1478. 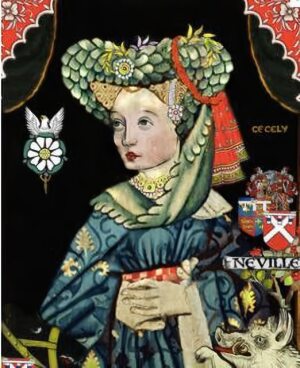 Edward IV died suddenly on 9 April 1483 and was succeeded by his thirteen year old son, Edward V. His uncle Richard, was appointed Lord Protector by Edward's will. When he first arrived in London, Richard resided at Baynard Castle, his mother's residence before his Anne Neville wife joined him. The young king and his ten year old brother, Richard Duke of York, were housed in the Tower, from where they were never to emerge. The rumour was again spread regarding his Cecily's supposed adultery and Edward's bastardy. Polydore Vergil later claimed that Cecily 'complanyd afterward in sundry places to right many noblemen .of that great injury'. Parliament declared Edward IV's marriage to Elizabeth Woodville invalid, their children illegitimate, and Richard was crowned as King Richard III on 6 July 1483.

Cecily appears to have experienced a good relationship with Richard's wife, her great-niece Anne Neville, with whom she shared an interest in religious works. Nothing has survived as regards her opinion of the deposition of her grandson Edward V. The only evidence of contact between Cecily and her son Richard during his reign is in the form of a letter addressed to his mother where he requests 'Madam, I heartily beseech you that I may often hear from you to my comfort'. According to the historian Polydore Vergil, Cecily, "being falsely accused of adultery, complained afterwards in sundry places to right many noble men of that great injury which her son Richard had done her."

The reign of Cecily's youngest son Richard proved to be brief, as he was defeated and killed by Henry Tudor on 22 August 1485 at the Battle of Bosworth. On 18 January 1486, Cecily's granddaughter, Elizabeth of York, eldest daughter of Edward IV, married the new king Henry VII and became Queen of England. Cecily devoted herself to religious duties for the remainder of her life and acquired a reputation for piety. Her daily life was recorded as:- 'She is accustomed to arise at seven o'clock and has ready her chaplain to say with her matins of the day, and matins of Our Lady; and when she is full ready she has a low mass in her chamber, and after mass she takes something to recreate nature; and so goes to the chapel, hearing the divine service and two low masses'.

Cecily Neville died on 31 May 1495, 35 years after her husband, and was buried with him and their son Edmund, Earl of Rutland at Fotheringhay Church, in Northamptonshire. Her will made on 31 May 1495 at her castle of Berkhamsted in Hertfordshire, in the document she describes herself as: 'wife unto the right noble prince Richard late Duke of Yorke, fader unto the most cristen prince my Lord and son King Edward.

Her son Richard III is omitted, but this may be that her servants were now left dependent on the King's goodwill. The will makes provisions for several members of her family, including her granddaughter Elizabeth of York, the Queen and her sons Arthur, Prince of Wales and the four-year-old Henry, Duke of York (the future Henry VIII) as well as Lady Margaret Beaufort, the King's mother. She also left bequests to her daughter Elizabeth, her de la Pole grandsons and her granddaughters Cecily, Anne, Katherine and Brigit, younger daughters of Edward IV.

…Also I geve and bequeith to the Kinges noble grace all such money as is owing to me of the customes and two cups of gold. Also I geve and bequieth to the Quene a crosse croselette of diamantes a sawter with claspes of silver and guilte enamelled covered with green clothe of gold and a pix with the flesh of St Christofer. Also I bequieth to my lady the Kinges moder a portuos with claspes of gold covered with black cloth of golde. Also I geve to my lord Prince a bedde of arres of the Whele of Fortune and testour of the same a counterpoint of arras and a tappet of arres with the pope. Also I geve to my lord Henry Duke of Yorke three tappets of arres oon of them of the life of St John Baptist another of Mary Maudeleyn and the thirde of the passion of our Lord and Saint George…