The de la Pole family rose from lowly origins as wool merchants of Hull to the highest echelons of late fifteenth-century society.

The first step along this meteoric rise to power was one William de la Pole, a wealthy and successful wool merchant who born around 1290-95, thought to be the son of William of either Hull or Ravenser, he is known to have had two brothers, Richard de la Pole (died 1345) was also a merchant of Hull and a younger brother, John. By 1317, William occupied the post of deputy to the Royal Chief Butler and chamberlains of Hull. He exported large quantities of wool from Hull and provided finance to King Edward II.

Michael de la Pole, the son of William and his wife Catherine Norwich, was to rise much higher than his father, he became Edward III's chief financier, and served under Edward's sons Edward, the Black Prince and John of Gaunt, Duke of Lancaster. He later struck a close friendship with Edward's grandson and heir, Richard II. Richard appointed him Chancellor in 1383, and later elevated him to the peerage as Earl of Suffolk in 1385, Michael was the first of his family to be granted an aristocratic title. 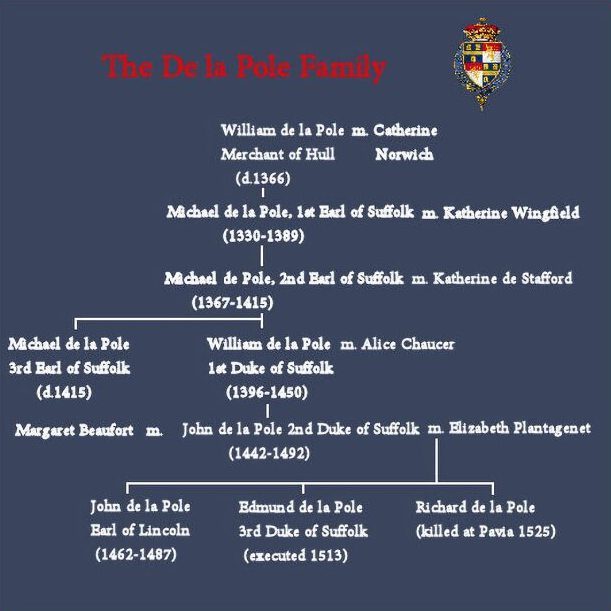 However, de la Pole's luck did not hold out, he was accused of treason by the Lords Appellant in November 1387 and before the 'Merciless Parliament' met in February 1388, he fled to Paris. Michael remained in exile in France for the rest of his life with his title was stripped from him.

Michael de la Pole, the second Duke of Suffolk was the eldest son of the first Earl and his wife Katherine Wingfield, the daughter of Sir John Wingfield. He made frequent attempts to have his father's lands and title restored to him finally meeting with success on the issue between 1389 and 1392. He served the crown in a military capacity but largely stayed out of politics

Michael married Katherine de Stafford, daughter of Hugh de Stafford, 2nd Earl of Stafford, their marriage produced a large family of at least eight children. He accompanied King Henry V on his 1415 campaign in France on which he contracted dysentery and died during the siege of Harfleur in September 1415, his eldest son, Michael de la Pole, briefly the third Earl, perished shortly after at the Battle of Agincourt. 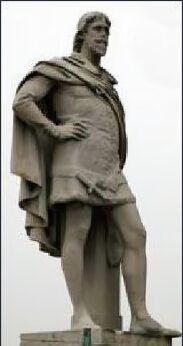 William de la Pole, who features in Shakespeare's 'Henry VI' was the second son of Michael de la Pole, 2nd Earl of Suffolk, and Katherine de Stafford, daughter of Hugh de Stafford, 2nd Earl of Stafford. He fought in Henry V's French wars and was seriously wounded during the Siege of Harfleur and had been sent home to England to recover thereby he missed fighting at Agincourt where his brother lost his life. After the death of Henry V he fought under the Duke of Bedford, the late king's brother and regent of the realm during the minority of King Henry VI. 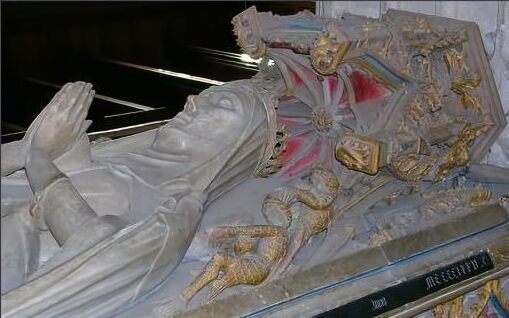 A close friend of the king's cousin Henry, Cardinal Beaufort, negotiated the marriage of King Henry VI with Margaret of Anjou in 1444 for which he was elevated to Marquess of Suffolk. He himself married Alice Chaucer (1404-1475), daughter of Thomas Chaucer of Ewelme, Oxfordshire, and granddaughter of the famous English poet Geoffrey Chaucer and his wife, Philippa Roet, who was the sister of Katherine Swynford, John of Gaunt's mistress and later wife.

Following the deaths in 1447 of Henry VI's uncle, Humphrey, Duke of Gloucester and Cardinal Beaufort, Suffolk became the principal power behind the throne of the feeble-minded Henry VI and was created Earl of Pembroke in 1447 and Duke of Suffolk in 1448.

Nobles jealous of Suffolk's influence with the king plotted to bring about his final ruin, he was blamed for the disastrous loss of Henry V's conquests in northern France, partly because the loss of Maine and Anjou had been the result of his negotiations for the king's marriage to Margaret of Anjou. He was subsequently arrested on 28 January 1450 and imprisoned in the Tower of London. Henry VI intervened to protect his friend, who was banished for five years, but on his journey to Calais his ship was intercepted in the Channel, Suffolk was captured, subject to a mock trial, and executed. He was seized and put into the ship's boat where "his head was struck off with a rusty sword after several blows by " one of the lewdest of the ship's company ". His body was later washed up on the sands near Dover.

William de la Pole was the eldest son of the first Duke of Suffolk and Alice Chaucer, on 7 February 1450, at the age of nine, he was married to the seven-year-old Lady Margaret Beaufort, the daughter of Henry VI's cousin John Beaufort, Earl of Somerset, their marriage, however, was later annulled. Although Richard Duke of York had been his father's bitter enemy, John chose to support the Yorkist cause at the outbreak of the Wars of the Roses and married for a second time to York's daughter Elizabeth Plantagenet, the sister of Kings Edward IV and Richard III. Although the family titles and estates had been forfeited on the execution of his father, they were restored to John by Edward IV. His marriage to Elizabeth Plantagenet produced eleven children:-

Following the death of his brother-in-law Richard III at the Battle of Bosworth in 1485, John submitted to the new king, Henry VII and continued to serve on commissions for him until his death in 1492. 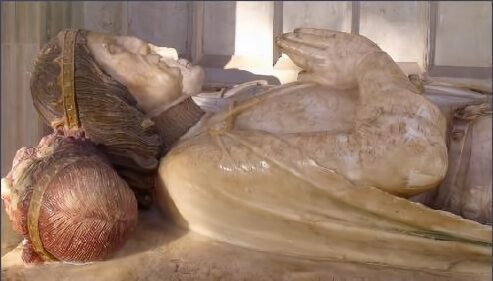 On the tragic early death of his only son, Edward of Middleham Prince of Wales in 1483, Richard III appointed his nephew John de la Pole, eldest son of his sister Elizabeth and John de la Pole, Duke of Suffolk as his heir-apparent. Although his nephew Edward Plantagenet, Earl of Warwick, possessed a superior claim he was debarred from inheriting the throne by his father Clarence's attainder. During Richard's short reign he was kept at the Sheriff Hutton Castle, in Yorkshire along with the Earl of Warwick. After the defeat and death of King Richard at Bosworth Field in 1485, Lincoln initially accepted the new Tudor regime and attended the coronation of Henry VII who hoped to quell the claims of die-hard Yorkists through marriage to Elizabeth of York.

When introduced to Lambert Simnel, whom it was said bore a resemblance to Edward, Earl of Warwick, who was a prisoner in the Tower of London at the time, Lincoln encouraged Simnel to impersonate Warwick. With financial help received from his aunt Margaret, Duchess of Burgundy, who detested her brother's Tudor supplanter, he sailed to Ireland. There he enlisted the aid of the ardent Yorkist supporter Gerald FitzGerald, Earl of Kildare. Simnel was accordingly proclaimed as 'Edward VI' in Ireland. Lincoln landed at Piel Island in Lancashire and marched towards York, which refused to surrender. He won a minor victory over Henry VII's forces at Bramham moor.

At the Battle of Stoke Field fought on 16 June 1487, he faced a Tudor army under the command of John de Vere, 13th Earl of Oxford, a superlative general, during which the Yorkist army was conclusively defeated. Lincoln himself was killed in the battle and in November 1487, he was posthumously attainted. Henry dealt leniently with Simnel who was taken and put to work in the palace kitchens.

Edmund de la Pole, the 3rd Duke of Suffolk was the fourth son of John de la Pole and Elizabeth Plantagenet. He was the grandson of Richard Duke of York and William de la Pole the 1st Duke. Following the death of his eldest brother John at Stoke Field in 1487, Edmund became the Yorkist claimant to the throne. Although he succeeded to the title Duke of Suffolk in 1491, in 1493 he was demoted to the rank of Earl.

In 1501 Edmund, aided by Sir James Tyrrell, fled from England and sought refuge with Maximilian I, the Holy Roman Emperor. Tyrell was later executed for providing help to the latest Yorkist pretender. In a treaty with Henry VII signed in 1502 Maximillian agreed not to support de la Pole should he make an attempt on the English throne. In 1506, Maximilian's son, Philip of Burgundy, became the reluctant guest of Henry VII. Eager to set sail again in order to claim his wife's Castillian inheritance, he was cajoled by the Tudor king to hand over de la Pole. Henry agreed to the proviso that Suffolk would not be harmed and instead imprisoned the Earl. His unscrupulous successor, Henry VIII, did not feel himself bound by this agreement and angered by the plots of his exiled younger brother Richard de la Pole, ordered Edmund's execution in 1513.

Richard de la Pole, the youngest son of John de la Pole Duke of Suffolk and Elizabeth Plantagenet, referred to as the 'White Rose', was the last member of the House of York to actively seek the crown of England. Richard joined his brother Edmund abroad in 1504 and remained at Aix-la-Chapelle as surety for his elder brother's debts. The creditors threatened to surrender him to Henry VII, but, more fortunate than his brother, he found a safe refuge at Buda with King Ladislaus II of Bohemia and Hungary. When Louis XII of France went to war with England in 1512, he recognized Edmund's claims to the English crown and gave him a command in the French army.

Following the execution of Edmund in 1513, Richard assumed the title of Earl of Suffolk. He settled at Metz, in Lorraine, where he was visited by Pierre Alamire, the German-Netherlandish composer and music copyist, who acted as a spy for Henry VIII. However, Richard employed Alamire as a counter-spy against Henry, Alamire, on being suspected of unreliability by Cardinal Wolsey, never returned to England.

Richard de la Pole allied with John Stewart, the 2nd Duke of Albany, the Scottish regent, to arrange an invasion of England, which however never materialised. He fought for Francis I against Emperor Charles V at the Battle of Pavia, where he was killed on 24 February 1525.