Jane Shore was born in London in around 1445, her real name was Elizabeth Lambert and she was the daughter of John Lambert, a wealthy merchant, and his wife Amy, herself the daughter of a grocer named Robert Marshall. The name Jane was the invention of a seventeenth-century playwright, this came about because, during the sixteenth century, her real first name of Elizabeth came to be omitted, then forgotten. 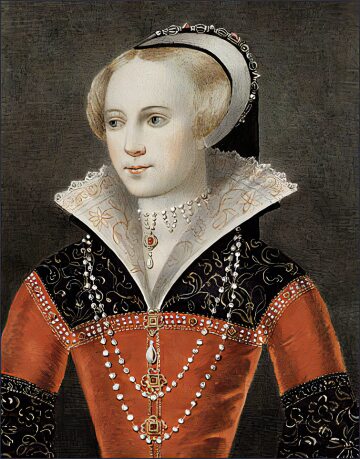 John Lambert was said to have who helped to finance King Edward IV's wars with the Lancastrians. Elizabeth was an intelligent child and received a good education. Her good looks attracted many suitors, among them William Hastings, 1st Baron Hastings, the friend of King Edward IV. Hastings affection for her is apparent later in life by his continual protection of her. Elizabeth's beauty was not the only attraction she had for men, she was also admired for her warm-hearted character and her wit.

Her father married her to William Shore (died 1494), a goldsmith and banker, who was much older than Elizabeth. Though a handsome man, he never really succeeded in winning her affections. Their marriage was annulled in March 1476 after she petitioned the annulment of her marriage on the grounds that her husband was impotent, which prevented her from fulfilling her desire to have children. Pope Sixtus IV commissioned three bishops to decide the case, who granted an annulment.

The Pennance of Jane Shore 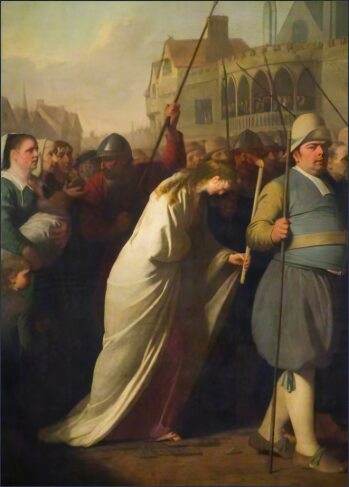 In 1476 Elizabeth Shore began her affair with Edward IV, following his return from signing of the Treaty of Picquigny in France. Edward called her the merriest of his concubines and described her as 'Merry in company, ready and quick of answer'. She possessed a large amount of influence over the king, which she did not use for her personal gain, but often used to bring those out of favour before the king to help them gain pardon. Thomas More later recorded many years later, that she "never abused (her influence) to any man's hurt, but to many a man's comfort and relief." and "where the king took displeasure, she would mitigate and appease his mind; where men were out of favor, she would bring them in his grace; for many that highly offended, she obtained pardon." Edward, a notorious womaniser, did not discard her as he had done with many of his previous mistresses. Their relationship was to last until his death in 1483.

Edward's brother, Richard Duke of Gloucester, became Protector of the Young King Edward V by the terms of the late king's will. Elizabeth Shore later took two other lovers, she briefly became the mistress of Edward IV's eldest stepson, Thomas Grey, 1st Marquess of Dorset, the queen's son by her first husband Sir John Grey, after which her ardent admirer William Hastings, 1st Baron Hastings became her lover. Grey's wife was the wealthy heiress Cecily Bonville, Baroness Harington, who was Hastings' stepdaughter. Hastings had previously supported Richard against the Woodville faction, but loyal to the memory of Edward IV, would not have countenanced the removal of his children from the succession.

Elizabeth was instrumental in bringing about the alliance between Hastings and the Woodvilles, which was formed prior to Richard's usurpation of the throne as King Richard III. On June 13th the Protector accused Jane and the Queen of trying to destroy him by witchcraft at Hastings' request, Hastings was immediately beheaded, without trial. Elizabeth was accused of witchcraft and of carrying messages between Hastings and Edward IV's widow, Elizabeth Woodville.

Though the witchcraft charges were dropped, Richard decreed that her punishment was to include open penance at Paul's Cross for her promiscuous behaviour and she was humiliatingly forced to walk barefoot in her petticoat through the streets of London with a taper in her hand. This punishment did not have the effect Richard planned, instead the crowds who gathered to watch the spectacle were moved to pity and impressed with the dignity she displayed during her ordeal.

After her public penitence, she was held at Ludgate prison. While there, she caught the attention of the King's Solicitor General, Thomas Lynom. After he expressed an interest in Shore to Richard, stating that he wished to marry her, the King tried to dissuade him. Richard sent a letter to John Russel, the Lord Chancellor, asking the chancellor to try to prevent the marriage, but if Lynom were determined on the marriage, to release Shore from prison and put her in the charge of her father until Richard's next arrival in London when the marriage could take place.

The couple were married and had a daughter named Julianne. It is believed that Shore lived out the remainder of her life in bourgeois respectability. Lynom lost his position as King's Solicitor when Henry VII defeated Richard III at the Battle of Bosworth in August 1485, but he was able to stay on as a mid-level bureaucrat in the new reign, becoming a gentleman who sat on the commissions in the Welsh Marches and clerk controller to Arthur, Prince of Wales, at Ludlow Castle.

Thomas More, writing when she was still alive, but very old, declared that even then an attentive observer might discern in her shrivelled face the traces of her former beauty. She died in 1527 at the age of 82 and is buried in Hinxworth Church in Hertfordshire. Rumours that she died in poverty are very likely to have been untrue.