Sherrif Hutton Castle is situated at the village of Sheriff Hutton around six miles (10km) from York. The castle was founded as a motte and bailey castle by one Bertram de Bulmer, Sheriff of York, during the reign of King Stephen. 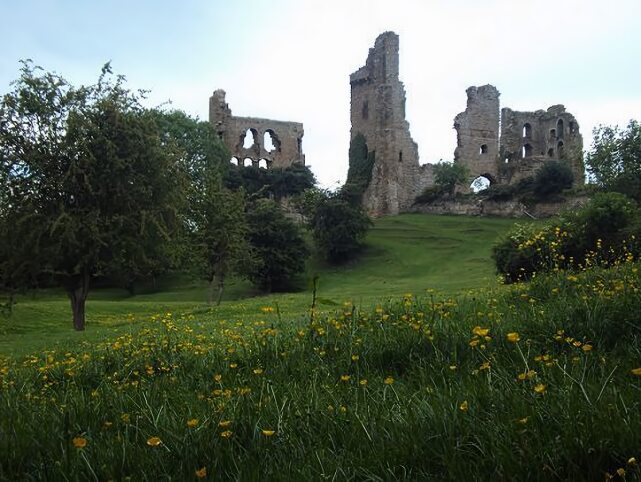 The castle, which now stands in romantic ruins within the grounds of a farm, is quadrangular in form, with four crumbling corner towers connected by ranges of buildings, enclosing an inner courtyard. The northern and western sides are straight, whereas those on the south and east contain obtuse, outward pointing angles at their centres.

The entrance lies in the east wall, protected by a gatehouse. Only sections of the towers stand to their original height, and the ranges of buildings and curtain walls between are now gone. A middle and outer ward originally existed, but these are now covered by the farm.

The Neville lands were partitioned in the mid-thirteenth century, Ralph Neville, Earl of Westmorland married twice, producing 22 children in the process, the earldom of Westmorland passed to the descendants of his son by his first marriage to Margaret de Stafford. However, Ralph favoured his sons by his second marriage to Joan Beaufort, his eldest son by Joan, Richard Earl of Salisbury, inherited the bulk of the Neville estates on his death, leading to bitter disputes over the inheritance and lasting estrangement between the Nevilles of Raby, who descended from Margaret Stafford, and the Nevilles of Middleham descended from Joan Beaufort. Sheriff Hutton passed from the Earl of Salisbury to his son Richard, Earl of Warwick, later known to history as 'Warwick the Kingmaker'.

Richard III acquired the castle from his father-in-law, Warwick, who's younger daughter Anne Neville he had married, he inherited Warwick's lands on his death at the Battle of Barnet in 1471.

In July, 1484, during the period when he served as Lord of the North, Richard III established Sheriff Hutton Castle as one of the headquarters of the Council of the North, the other was at Sandal Castle. The council was to last for a century and a half. Richard was staying at the castle where he received news from the Earl of Northumberland in October 1480 that the Scots might attempt a raiding party across the border. Northumberland sent a warning to the magistrates of York ordering them to prepare an armed force. The men of York then sent a representative to the king who was received at Sheriff Hutton.

Edward, Earl of Warwick, the young son of George Duke of Clarence and at the time under attainder, was sent to Sheriff Hutton in 1484 for safekeeping, as was Richard's nephew and heir, John de la Pole, Earl of Lincoln, the son of his sister Elizabeth. Richard's niece, Elizabeth of York, later destined to become the mother of the formidable Henry VIII, was also housed at the castle for a spell, when her suspected arrangement to marry the then pretender, Henry Tudor, (later Henry VII) placed her under suspicion.

The castle was repaired in 1537 by its then owner the second Duke of Norfolk, King Henry VIII's illegitimate son, Henry Fitzroy was housed at Sheriff Hutton under the care of Cardinal Wolsey. Following the Council's relocation to in the mid sixteenth century, the castle went into decline, it remained crown property until the death of King Charles I. 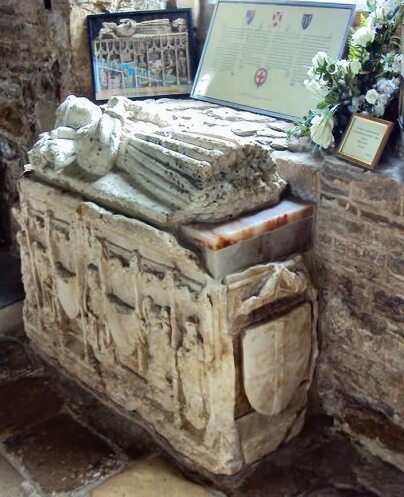 A monument long thought to be Richard III's only legitimate son, Edward of Middleham, Prince of Wales stands in the church of St Helen and Holy Cross at Sheriff Hutton. Edward died suddenly in 1484, the exact date of his death remains a matter of controversy, with some sources citing 31st March as the date and others 9th April. It is now thought that Edward was buried in the church of Saints Mary and Alkelda in Middleham, Both Richard and his wife Anne Neville were reported to have been distracted by their grief. Richard later appointed his sister's son, John de la Pole, as his successor.

Edward, earlier known as Earl of Salisbury, was born at Middleham Castle between April 1473 and December 1474. It is suspected that Edward, believed to have been a delicate child, was too ill to travel to his parents' coronation at Westminster Abbey on 6th July 1483, but was appointed nominal Lord Lieutenant of Ireland on 19th July. He was invested as Prince of Wales at a ceremony at York Minster on 24th August.

The mutilated white alabaster effigy, believed to be that of Edward of Middleham, in the church at Sheriff Hutton is not a tomb but a cenotaph (i.e. it is empty).

The monument was dismantled at some unknown date, attempts at cleaning and conservation were made in the nineteenth century and the monument was finally reassembled in the twentieth century and provided with a new core and damp course at the expense of Richard III Society.

Burial Places of the Plantagenets Previous