The Battle of Hastings

The Saxon King, Edward the Confessor, last of the ancient House of Wessex, died childless on the stormy night of 4th -5th January, in the momentous year of 1066. On his deathbed Edward was said to have willed his throne to his brother-in-law, Harold Godwineson, Earl of Wessex, having made a previous promise to his maternal cousin, William, Duke of Normandy, that he should inherit the English throne if he died without producing an heir. The Witenagemot or Saxon council of wise men duly elected Harold as King, a decision that was met with fury by Duke William. King Harold II was hastily crowned at the newly consecrated Westminster Abbey on 6th January 1066.

Site of the battle 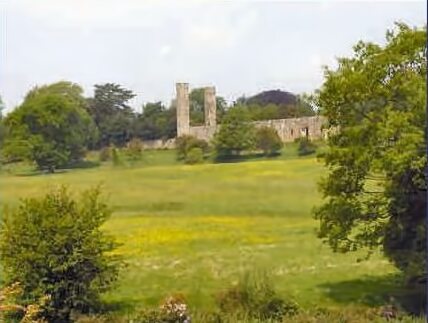 Harold had previously sworn a reluctant oath to support William's claim to the throne when having been shipwrecked on the coast of Normandy, he had become William's unwilling guest. However, before he would allow Harold to leave, William required him to swear an oath to support his claim to the crown upon Edward's death. Under duress, Harold finally consented and swore the oath on holy relics. William began to build an invasion fleet to take by force what he considered to be his by right. The Pope himself, due to Harold's foresworn oath on holy relics, supported William's enterprise.

England was invaded by Harald II Hardrada, King of Norway, in league with Harold's unruly and discontented brother Tostig Godwinson, Harold marched north to meet them at Stamford Bridge, to the east of York, where on 25th September he won a resounding victory against the Norwegians, both Harald Hardrada and Tostig perished in the battle.

Meanwhile, William of Normandy had assembled a large invasion fleet and set sail for English shores two days after Stamford Bridge was fought, delayed by storms in the Channel, he is believed to have landed at Bulverhythe (between Hastings and Bexhill-on-Sea) on the 28th of September. The traditional site of William's landing at Pevensey is now disputed. William began to pillage and burn the surrounding area, in the hope of forcing Harold to advance south to meet him. Harold, on receipt of the news, hurried south to confront the Norman invaders. At his foundation of Waltham Abbey, he paused to pray for victory. Gathering what forces he could, he marched to meet William at Hastings.

Re-enactment of the battle 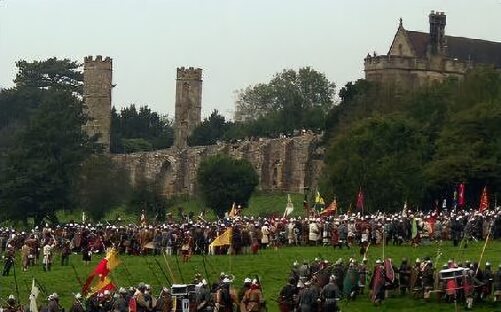 The Battle of Hastings, one of the most important battles in English history, took place on 14th October 1066. The Saxon army consisted of around 5,000-7,500 infantry (the Saxons fought on foot), many of them unrested after the exhausting march south. The core of the Saxon army was made up of full-time professional soldiers called Housecarls, who were armed with sword and battleaxe. The remainder of the army, known as the Fyrd, consisted of the part-time militia of thegns.

The Norman army numbered in excess of 10,000 and was made up of well trained cavalry, infantry and archers, mainly of Norman, Flemish and Breton extraction and greedy for English lands, their promised reward should victory be theirs. Harold took up a defensive position on Senlac Ridge, blocking the road to London, his army formed up in three wedges. The Norman army was thus forced to attack uphill, placing them at a disadvantage.

William's minstrel, Taillefer, obtained permission to strike the first blow and rode out before the Saxon lines, singing the Song of Roland, flinging his sword in the air and catching it, he charged into the Saxon ranks alone and was quickly dispatched.

The Saxon army formed a shield wall along the edge of the hill, which rebuffed repeated Norman attacks. Battle was opened by the Norman archers, who fired repeated volleys at the Saxons, which had little effect, any casualties were quickly replaced from behind and the shield wall held firm. Ferocious hand to hand fighting with the Norman infantry ensued, after which William ordered the cavalry to charge.

Eventually, the Breton division, which formed the left of William's army, broke and fled down the hill. A rumour arose in the Norman ranks that Duke William was dead, causing panic and flight. Many of the Saxon fyrd pursued the fleeing Normans down the hill, breaking the defensive shield wall. William put heart into his army by loudly announcing he still lived. The Normans rallied at the news, Harold's brothers Gyrth and Leofwine were both slain on the battlefield. Harold had expected to be reinforced by the levies of Earls Edwine and Morkere, but they never arrived.

The battle continued for most of the day, Harold and his Saxons fought with steely determination for possession of their country. As dusk began to fall over Hastings, William ordered his archers to fire high into the air, over the re-formed shield wall and one of these arrows are said to have hit Harold in the eye, blinding him, although this point is disputed by some sources. Whether this was the case or not, Harold fell mortally wounded under the dragon standard of Wessex. 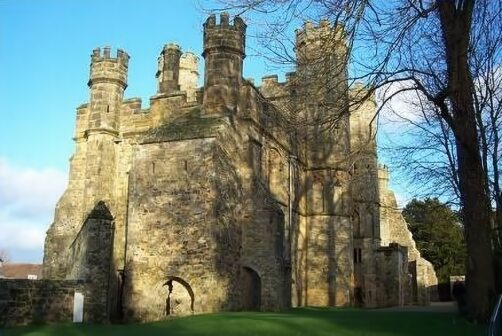 The Saxon army, seeing that the day was lost, began to flee the field. The housecarls, Harold's trained professional militia, loyally and valiantly defended the body of their king to the last, but they too finally fell and Harold's body was mutilated by the Normans, a vindictive act, which William punished. Some of the Normans pursued the remnant of the fleeing Saxon fyrd but were ambushed and killed. The battle was lost and Anglo-Saxon England died with Harold on the battlefield that day.

A recent investigation carried out by Channel 4's Time Team programme has left researchers convinced the battle took place, not at the traditional site of battle abbey but on a road junction, near the town of Battle.

After carrying out an aerial laser survey, they concluded that the hill would have been the most likely place for the two armies to have met, rather than the 'boggy' terrain of the official 1066 battlefield. Time Team carried out archaeological digs on the battlefield and nearby at Caldbec Hill, an alternative battle site. No archaeological evidence was unearthed at either site to prove where the battle took place.

English Heritage, who own Battle Abbey and the 1066 battlefield, have made the point that less than one percent of the battlefield was excavated during the investigation. They dispute the claim that a new battlefield has been discovered, pointing out the 'new' site is in fact just an extension of the official battlefield.

Harold's deeply distressed mistress, Edith Swannesha came to William pleading for her lover's body and offering him its weight in gold in exchange, but William coldly refused her distraught request. He had Harold buried in a secret location.

William gave thanks to God for his victory and later founded Battle Abbey on the battlefield. A plaque has been erected to mark the site where it is believed King Harold, the last Anglo-Saxon King of England, fell.

After resting his army at Hastings, William proceeded to London, Edwin and Morcar, the Northern Earls, who had failed to turn up on the battlefield, made their submission to him, as did the young Edgar the Atheling, great-nephew of Edward the Confessor and a further Saxon claimant to the throne. William was crowned King of England at Edward the Confessor's foundation of Westminster

Page 2: A Tour of Hastings Battlefield and Battle Abbey

The Battle of Stamford Bridge PreviousNext A tour of Hastings battlefield