On the death of Edward the Confessor without a direct heir, the Witan elected his brother-in-law, the powerful Harold Godwinson, Earl of Wessex, as King. 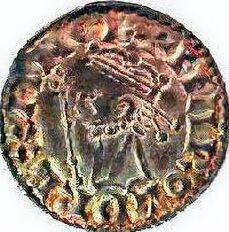 Harold had been elected from several candidates, including Edgar Atheling, who although he had the superior hereditary right, being Edward's great-nephew, was considered too young at the time to make an effective ruler. It was claimed that Edward had willed his throne to his brother-in-law, Harold, on his deathbed, ignoring his previous promise to his enraged cousin William of Normandy.

The future Harold II had been born around 1020-22, half Saxon and half Dane, he was the eldest son of Godwine, Earl of Wessex and Gytha, the daughter of Harold Bluetooth, King of Denmark. Making him the first cousin of King Canute. On his father's side he was descended from a cadet line of the House of Wessex, Godwine's father, Wulfnoth Cild, was the fourth great-grandson of Ethelred I. The chronicler Orderic Vitalis wrote of Harold that he 'was very tall and handsome, remarkable for his physical strength, his courage and eloquence, his ready jests and acts of valour.'

Edward the Confessor had banished Earl Godwine and his family in 1051, Edward bore a deep resentment to Godwine, who he believed to be implicated in the murder of his brother, Alfred the Atheling, when on a visit to England during the reign of Harold I. Earl Harold sailed to Ireland, where he gathered troops, on returning to England, he met up with his father's forces and they jointly advanced on London. Edward the Confesssor was forced to restore them to power. Godwine died in 1053, whilst feasting with the king during Easter at Winchester, reportedly of an apoplexy.

Harold from the Bayeux Tapestry 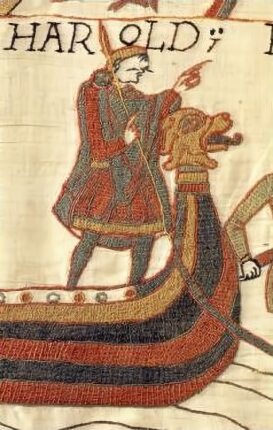 Harold had led campaigns as Edward's lieutenant in Wales and defeated Gruffydd ab Llywellyn, whose widow, Aldgyth, he took for his wife. In 1065 a revolt arose in Northumbria against the rule of Harold's tempestuous and unruly brother Tostig. The Northumbrians, weary of Tostig's unjust rule, elected Morkere as their Earl. Harold granted the rebels' requests and Tostig was exiled. Tostig thereafter harboured a deep and burning resentment of the brother he felt had betrayed him.

King Harold II was hastily crowned at the newly consecrated Westminster Abbey on 6th January 1066. Shortly afterwards, on 18th April, a portentous star was seen in the night sky, moving across the heavens with a trail of fire in its wake, it was seen all over England for seven nights thereafter. Harold and the witan saw it, who are recorded as being assembled on Thorney Island for the feast of Easter. Many saw it as an omen of doom, symbolising the wrath of God toward the foresworn Harold, who had previously sworn on holy relics to support William of Normandy's claim to the throne. It has now been identified as Halley's Comet.

Harold's embittered brother Tostig Godwinson, bent on revenge, had allied himself with Harold Hardrada, King of Norway, and invaded England with a formidable Norwegian fleet that landed at Riccall, near York. On hearing of the news, Harold gathered an army and marched to meet them at Stamford Bridge in Yorkshire.

The new King attempted compromise with his brother and sent a message offering to restore his Earldom, to which Tostig responded by asking what Harold was prepared to give Hardrada, "Seven feet of land for a grave" was Harold's defiant reply. Tostig refused to abandon his ally.

The Battle of Stamford Bridge commenced when the Saxons attacked the Norwegian shield wall, which despite repeated attempts, they failed to penetrate. The Saxons fell back and the Norwegians, believing them to be in retreat, broke ranks and pursued them, at which the Saxons wheeled round and attacked. Harold Hardrada was killed by an arrow in his neck, his fallen banner, Land-Ravager was seized by Tostig, who assumed command of the Norwegian army. He fell into the frantic conflict shortly after, the Norwegians fought with determination and courage until dusk but victory went to the Saxons. The following day, Olav, the son of Hardrada gave himself up to the English, along with the Earl of Orkney. In a merciful gesture, Harold allowed him to return home, with all the survivors, on a promise they would never invade England again. 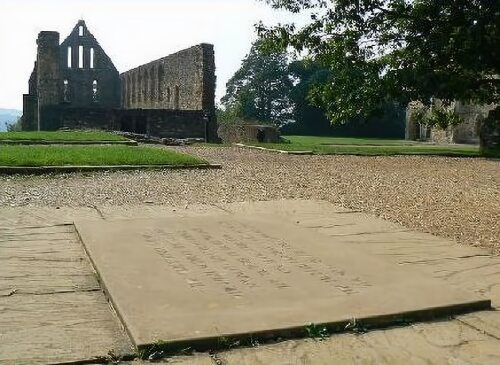 During the jubilant celebrations of a victory feast after the battle of Stamford Bridge, Harold received the ominous news that William of Normandy had, at last, landed at Bulverhythe on the south coast and hastily marched his army, which was in dire need of rest, the 240 miles to confront him. At the resulting Battle of Hastings on 14th October 1066, England's last Saxon King was killed and his forces routed. The account of the contemporary chronicler William of Poitiers, states that Harold's body was given to the half Saxon William Malet for burial:-

"The two brothers of the King were found near him and Harold himself, stripped of all badges of honour, could not be identified by his face but only by certain marks on his body. His corpse was brought into the Duke's camp, and William gave it for burial to William, surnamed Malet, and not to Harold's mother, who offered for the body of her beloved son its weight in gold. For the Duke thought it unseemly to receive money for such merchandise, and equally he considered it wrong that Harold should be buried as his mother wished, since so many men lay unburied because of his avarice. They said in jest that he who had guarded the coast with such insensate zeal should be buried by the seashore".

Another contemporary source records that Harold's handfast wife, Edith Swannesha, was called to identify the body, which she did by some private mark known only to her. Harold's body was buried on the battlefield, but William later had his remains moved by Waltham Abbey. The discovery of a Saxon coffin in the church at Bosham in the 1950s led to much speculation that King Harold was buried here. An exhumation had shown it to be the grave of a middle-aged man who had lost a leg, the head was also missing. A recent attempt at the exhumation of the grave was refused in December 2004, on the reasons that the chances of establishing the identity of the body as Harold II were unlikely and therefore did not justify disturbing a burial place.

Edward the Confessor PreviousNext The Anglo-Saxons