Tostig Godwinson, younger brother of King Harold II was the third son of the powerful Earl Godwine of Wessex and his Danish wife Gytha, the daughter of Thorkell Sprakaleg. In 1051, Tostig married Judith, the daughter of Count Baldwin IV of Flanders and aunt of Matilda of Flanders, who married William, Duke of Normandy. The marriage produced two sons:- Skuli Tostisson Kongsfostre (born 1052) -

Godwin and his sons

Ketil Tostisson (born 1054) Along with his father and brothers, Tostig was banished from England in 1051 by the Saxon king Edward the Confessor but forcefully returned in 1052. On the death of Earl Siward three years later, he was appointed Earl of Northumbria, Northamptonshire and Huntingdonshire.

Tostig made an unpopular Earl of Northumbria, he subdued the lawless area of Northumbria by implementing new laws and severely punishing offenders. He imposed heavy taxation and was tyrannical towards those who opposed his rule, his reign in Northumbria was marked by increasing brutality, Earl Tostig was alleged to have been involved in the murders of several members of leading Northumbrian families. In either late 1063 or early 1064, Gamal, son of Orm and Ulf, son of Dolfin, were assassinated when they visited Tostig under safe conduct. The 'Vita Edwardi', records that he had 'repressed the Northumbrians with the heavy yoke of his rule'.

Tostig's unpopularity led to difficulties in raising local levies to combat the raids of the Scots into Northumbria. He was to resort to using Danish mercenaries as his army, an expensive policy which was widely resented. The fact that Tostig was from the south of England, which held a distinctly different culture from the north added to his unpopularity with the Northumbrians.

Tostig made an unpopular Earl of Northumbria, he subdued the lawless area of Northumbria by implementing new laws and severely punishing offenders. He imposed heavy taxation and was tyrannical towards those who opposed his rule, his reign in Northumbria was marked by increasing brutality, Earl Tostig was alleged to have been involved in the murders of several members of leading Northumbrian families. In either late 1063 or early 1064, Gamal, son of Orm and Ulf, son of Dolfin, were assassinated when they visited Tostig under safe conduct. The 'Vita Edwardi', records that he had 'repressed the Northumbrians with the heavy yoke of his rule'.

's unpopularity led to difficulties in raising local levies to combat the raids of the Scots into Northumbria. He was to resort to using Danish mercenaries as his army, an expensive policy which was widely resented. The fact that Tostig was from the south of England, which held a distinctly different culture from the north added to his unpopularity with the Northumbrians. 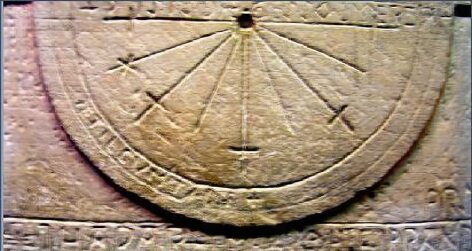 On 3 October 1065, the discontented thegns of Yorkshire, having had enough, descended on York and occupied the city. After killing Earl Tostig's officials, they declared him outlawed for his unlawful actions and demanded that Morcar, the younger brother of Edwin, Earl of Mercia be appointed ruler of Northumbria in his place. The rebels marched south to present their case to King Edward and were joined at Northampton by Earl Edwin of Mercia and his forces. Tostig's brother Earl Harold, had been dispatched by King Edward to negotiate with the rebels and after hearing their grievances, he realized that Tostig could not be allowed to continue as ruler of Northumbria.

King Edward was also inclined to agree to the demands of the rebels resulting in Tostig, who refused to accept his deposition, being outlawed. This led to the fatal and bitter enmity which developed between the two brothers. Before the king and his council, Tostig publicly accused Harold of fomenting the rebellion. Harold was eager to unify England in the face of the threat posed by William Duke of Normandy, who coveted the English throne, the most plausible reason that Harold had complied with the exile of his brother was to ensure peace and loyalty in the north of England. Tostig, seethed and plotted his revenge.

Tostig left with his family and some loyal thegns and sought refuge with his brother-in-law, Count Baldwin V of Flanders. King Edward the Confessor died on the stormy night of 4th -5th January, 1066 and Harold Godwineson was proclaimed the next King of England. Shortly after Harold's coronation, Tostig went to Normandy to meet with Harold's enemy Duke William, and offered aid in his planned invasion of England. William agreed, but Tostig was unwilling to wait for William to finish his preparations. His brother-in-law the Count of Flanders supplied him with a fleet, he then proceeded to raid the coast as far as Sandwich but was forced to retreat when met with opposition from King Harold. He moved north and after an unsuccessful attempt to get his brother Gyrth to join him, he raided Norfolk and Lincolnshire. He suffered defeat at the hands of Earls Edwin and Morcar and deserted by his men, fled to King Malcolm III of Scotland and spent the summer of 1066 in Scotland.

alliance with Harald Hardrada, King of Norway, Tostig again invaded England. Hardrada arrived off the English coast in September1066, where his army was reinforced by Tostig at the head of forces from Flanders and Scotland. In the late summer of 1066, Hardrada and Tostig landed at Tyne, they proceeded to sack and burn the town of Scarborough and sailed up the River Ouse before advancing on the city of York. They defeated an Anglo-Saxon army sent to meet them under the command of Edwin, Earl of Mercia and his brother Morcar, Earl of Northumbria at the Battle of Fulford on 20th September, after which York surrendered and hostages were demanded from the Northumbrians. They then sailed down the Humber and disembarked at Riccall.

arrived of the Viking attack and Harold hurried north with his houscarls and as many thegns as he could muster. Continuing to travel both day and night, he marched his army from London to Yorkshire, a distance of about 185 miles, in only four days, which enabled him to take the Norwegians completely by surprise. Learning that the Northumbrians had been ordered to send hostages and supplies to the Vikings at Stamford Bridge, to the east of York. Harold advanced to attack them at this rendezvous point. No forces had been left at York, enabling Harold to march right through to Stamford Bridge. At a parley prior to the battle, Harold offered his brother, Tostig, his earldom back if he would lay down his arms and join him, Tostig asked what English lands Harald Hardrada could expect if he dismissed his Viking army. King Harold's reply was that 'he would offer Harald seven foot of good English soil, or as much as he needed as he was taller than other men'.

The Viking army, caught unaware by the English, was divided, with some of their troops positioned on the west side of the River Derwent and the bulk of their army on the east side. The 25th September, 1066, was a warm day, for the time of year, which had led to the Vikings to leave their byrnies (a mail shirt reaching the mid thigh) at their ships, placing them at a distinct disadvantage in the following battle. By the time the main English army had arrived at the scene, the Vikings on the west side of the river had either been killed or were fleeing across the bridge. The English attempted to follow across the bridge but were delayed by the need for the army to pass through the bottle neck presented by the bridge itself. 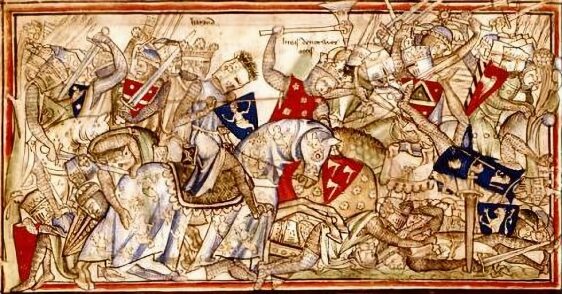 A huge Viking berserker clutching a massive double-bladed greataxe blocked this narrow crossing, single-handedly holding up the entire Saxon army. The Anglo-Saxon Chronicle records that he slew up to 40 Englishmen. He was finally defeated when an Anglo-Saxon soldier floated under the bridge in a half-barrel and thrust his long spear through the laths in the bridge, mortally wounding him. The delay created by the beserker had allowed time for the bulk of the Viking army to form a shield wall against the English attack. The Anglo-Saxon army poured across the bridge and formed a line just short of the Vikings, they then locked shields and charged. The battle raged for hours

Eventually, the Viking army began to fragment and fracture, allowing the English to break in through the shield wall. The firce fighting continued throughout the afternoon. The massive Viking king Hardrada, who, according to the sagas, wore a blue tunic and helmet and wielded a two-handed sword, advanced ahead of his army and in true beserker style, dealt devastating blows to all around him. As dusk drew near, he was killed by an arrow to his windpipe. Tostig took up the fallen Viking Raven Banner, "Land-Ravager" and continued to fight on but was himself slain.

Vikings left behind to guard the ships at Ricall, led by Eystein Orri, Hardrada's daughter's fiancé and fully armed for battle, arrived on the scene and plunged into the melee. Their counter-attack, described in the Viking tradition as "Orri's Storm", briefly held up the English advance, but was soon overwhelmed and Orri himself was slain by a Saxon warrior as darkness fell on the battlefield.

a leader around which to rally, the battered remnants of the Norse invasion force broke. The routed Viking army was pursued by the English, some of the fleeing Norsemen were drowned in the rivers.

his death at Stamford Bridge, it is believed that his Tostig's body was buried at York Minster. Tostig's two sons took refuge in Norway, while his wife Judith later married Duke Welf of Bavaria. Harold, receiving news that a Norman army had landed in the south, marched rapidly at the head of his army to confront and suffer defeat at the hands of William the Conqueror at the Battle of Hastings nine days later.