Godwin was the son of Wulfnoth Cild, thegn of Sussex, himself the son of Æthelmær the Stout, a direct descendant in the male line from Ethelred I King of Wessex (c. 837-871), an elder brother of Alfred the Great. In 1009 Wulfnoth was accused of unknown crimes at a muster of Ethelred the Redeless' fleet and fled with twenty of the king's ships.

Wulfnoth's son Godwin was probably an associate of Ethelred's eldest son, Athelstan, who on his death in 1014 left him an estate at Compton in Sussex.

The throne of England was seized by King Canute in 1016, after which Godwin's rise to power was swift. By 1020 he had been granted the earldom of Wessex. Between 1019 and 1023 he accompanied King Canute to Denmark, where he distinguished himself, and soon afterwards married Gytha, the daughter of Thorkell Sprakaleg and sister of the Danish earl, Ulf, who was married to Canute's sister, Estrid.

On the death of Canute on 12 November 1035, Harold Harefoot, his illegitimate son with Ælfgifu of Northampton, usurped the throne of England. Harthacnut, his legitimate son by Ethelred the Redeless' widow, Emma of Normandy, reigned in Denmark.

In 1040, Harold Harefoot died and Godwin supported the accession of his half-brother Harthacnut to the throne of England. The House of Atheling made attempts to recover the throne of England. Edward and Alfred, in exile in Normandy, gathered a fleet and sailed for England. On approaching Southampton, the elder of these, Edward, found the town up in arms against him, unwilling to accept any son of the weak and hated Ethelred. Edward had little choice but to return to Normandy.

Alfred the Atheling landed on the Sussex coast with a Norman mercenary body guard and intended to travel to London. He was captured by Earl Godwin of Wessex, and brutally blinded, He suffered an agonizing death at Ely soon after due to the trauma of the wounds and was buried at Ely Cathedral. The Anglo-Saxon Chronicle records:-

'As Alfred and his men approached the town of Guildford in Surrey, thirty miles south-west of London, they were met by the powerful Earl Godwin of Wessex, who professed loyalty to the young prince and procured lodgings for him and his men in the town. The next morning, Godwin said to Alfred: "I will safely and securely conduct you to London, where the great men of the kingdom are awaiting your coming, that they may raise you to the throne." This he said in spite of the fact that the throne was already occupied by the son of Knud, Harold Harefoot, and he was actually in league with King Harold to lure the young prince to his death. Then the earl led the prince and his men over the hill of Guildown, which is to the west of Guildford, on the road to Winchester, not London. Perhaps the prince had insisted on continuing his journey to his original destination, his mother's court in Winchester, in any case, Godwin repeated his tempting offer; showing the prince the magnificent panorama from the hill both to the north and to the south, he said: "Look around on the right hand and on the left, and behold what a realm will be subject to your dominion." Alfred then gave thanks to God and promised that if he should ever be crowned king, he would institute such laws as would be pleasing and acceptable to God and men. At that moment, however, he was seized and bound together with all his men. Nine tenths of them were then murdered. And since the remaining tenth was still so numerous, they, too, were decimated. Alfred was tied to a horse and then conveyed by boat to the monastery of Ely. As the boat reached land, his eyes were put out. For a while he was looked after by the monks, who were fond of him, but soon after he died, probably on February 5, 1036.'

When Alfred's maternal half-brother Hardicanute succeeded his half-brother Harald, he prosecuted Earl Godwin and Lyfing, Bishop of Worcester and Crediton, for their part in Alfred's murder. The Bishop lost his see for a while, Earl Godwine appeased the king by presenting him with the gift of a warship carrying eighty fighting men and swore that whatever he had done was in obedience to King Harald, he was acquitted and managed to retain his extensive estates. When Harthacnut himself died in 1042 Godwin supported the claim of Æthelred's last surviving son Edward the Confessor to the throne. Edward had spent most of the previous thirty years in Normandy. His reign restored the native royal house of Wessex to the throne of England.

Earl Godwin with Edward the Confessor 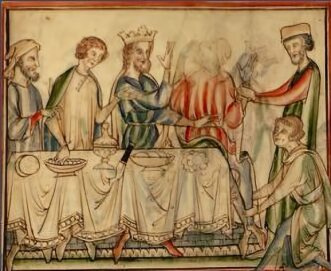 Despite his alleged responsibility for the death of Alfred Atheling, Godwin secured the marriage of his daughter Edith of Wessex to Edward in 1045. As Edward drew advisors, nobles and priests from his mother's country of Normandy, where he had grown up, Godwin became the leader of the opposition to the growing Norman influence in England. Following a violent skirmish between the people of Dover and Eustace II, Count of Boulogne, Edward's brother-in-law, while staying at Dover, Eustace and his retainers greatly offended the citizens of the town by taking free lodgings. A scuffle developed, in which an Englishman was wounded, he, acting in self-defence, killed one of the Normans. His house was promptly surrounded by Eustace and his men and the Saxon was murdered along with several other inhabitants of the town. The men of Dover then drove the Norman intruders out of the town. Godwin was ordered to punish the people of Dover, which he refused to do, choosing to champion his fellow Saxons against a visiting foreign ruler and the king.

Godwin died suddenly, on 15 April 1053, after collapsing of an 'apoplexy' whilst dining with the king at a royal banquet at Winchester, possibly a stroke.

He was succeeded as Earl of Wessex by his eldest son Harold Godwinson, who later succeeded Edward the Confessor as King of England in 1066, Harold met his brother Tostig Godwinson, who had invaded England with Harald Hardrada at the Battle of Stamford Bridge where Tostig was killed, but was overthrown and killed, along with his brothers Gyrth and Leofwine at the Battle of Hastings. Godwine's surviving son, Wulfnoth, lived nearly all his life in captivity in Normandy until William the Conqueror's death in 1087.