Although King Canute left England to Hardicanute, his son by Emma of Normandy, the throne was seized two weeks after Canute's death by Hardicanute's half-brother Harold Harefoot, Canute's son by either his mistress or his first wife (It is not clear which), Elgifu of Northampton. Harold had been born around 1012. He was said to have acquired the name Harefoot for his speed, and the skill of his huntsmanship. 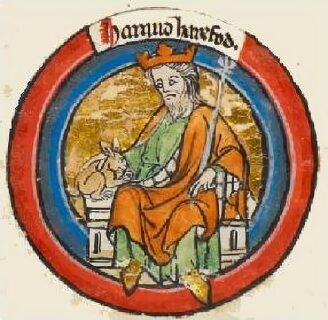 Canute had intended to divide his dominions between his three sons. He left Norway to his eldest son, Sweyn, and Denmark to Harold. On Canute's death, Harold promptly took possession of his father's treasure and received the support of Earl Leofric of Mercia and the majority of the Danes.

The great council, or Witangemot, meeting at Oxford, confirmed Harold as King, but Ethelnoth, Archbishop of Canterbury, refused to crown him. Ethelnoth is said to have placed the royal sceptre and crown on the altar of a church, possibly at Canterbury Cathedral and offered to perform the ceremony without using any of the royal regalia. He ardently refused to remove the regalia from the altar and forbade other bishops from doing so. Harold rejected the Christian religion in protest, refusing to attend church services while he remained uncrowned.

Queen Emma of Normandy, who had the support of the nobles of Wessex and particularly Earl Godwine, an extremely powerful nobleman who was married to Canute's sister, managed to retain control of Wessex, where Emma acted as regent in the absence of Hardicanute, who himself remained in Denmark. Emma made vigorous attempts to unseat Harold in favour of her son.

On hearing the news of Canute's death, the sons of Ethelred the Redeless, Edward and Alfred, in exile in Normandy, gathered a fleet and sailed for England. On approaching Southampton, the elder of these, Edward, found the town up in arms against him, unwilling to accept any son of the weak and hated Ethelred. Edward had little choice but to return to Normandy. 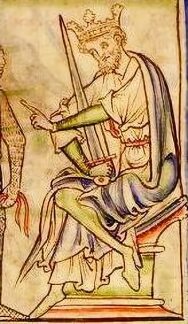 Harold's reign was short and brutish. Godwine, accepting the situation, switched sides and deserted Emma of Normandy. Alfred the Atheling, while on a visit to his mother in England, was on his way to Winchester to see her, he was captured by Earl Godwine and his followers dispersed. Alfred was delivered to an escort of men loyal to his step-brother, Harold Harefoot. He was transported on a ship to Ely, where he was blinded while on board. He suffered an agonizing death at Ely soon after due to the trauma of the wounds. -

'As Alfred and his men approached the town of Guildford in Surrey, thirty miles southwest of London, they were met by the powerful Earl Godwin of Wessex, who professed loyalty to the young prince and procured lodgings for him and his men in the town. The next morning, Godwin said to Alfred: "I will safely and securely conduct you to London, where the great men of the kingdom are awaiting your coming, that they may raise you to the throne." This he said even though the throne was already occupied by the son of Knud, Harold Harefoot, and he was actually in league with King Harold to lure the young prince to his death. Then the earl led the prince and his men over the hill of Guildown, which is to the west of Guildford, on the road to Winchester, not London. Perhaps the prince had insisted on continuing his journey to his original destination, his mother's court in Winchester, in any case, Godwin repeated his tempting offer; showing the prince the magnificent panorama from the hill both to the north and to the south, he said: "Look around on the right hand and the left, and behold what a realm will be subject to your dominion." Alfred then gave thanks to God and promised that if he should ever be crowned king, he would institute such laws as would be pleasing and acceptable to God and men. At that moment, however, he was seized and bound together with all his men. Nine-tenths of them were then murdered. And since the remaining tenth was still so numerous, they, too, were decimated. Alfred was tied to a horse and then conveyed by boat to the monastery of Ely. As the boat reached land, his eyes were put out. For a while, he was looked after by the monks, who were fond of him, but soon after he died, probably on February 5, 1036. This event would later affect the relationship between his brother Edward the Confessor and Godwin, during the former's reign, Edward held Godwin responsible for the death of his brother.

Emma was forced into exile, taking refuge in Flanders and was joined there by Hardicanute. Together they began to make plans for an invasion of England, having gathered a fleet of sixty warships. The early death of Harold on 17th March, 1040 at Oxford at the age of but 24, made it possible for his half-brother Hardicanute to enter England peacefully. The cause of Harold's untimely death is not certain. An Anglo-Saxon charter attributes the onset of a sudden illness of Harold to divine judgment.

Harald Harefoot was buried at Westminster, but his body was subsequently exhumed by his half-brother, Hardicanute, and treated with much indignity, it was beheaded and thrown into a fen bordering the Thames. It was later recovered by fishermen and reburied in the churchyard of St Clement Danes.

Harold had a son, Elfwine, by Ælfgifu who may have been his wife. Elfwine was later to become a monk on the continent and used the monastic name Alboin and is recorded in charters from the Abbey Church St. Foy in Conques, where he is referred to as the son of "Heroldus rex fuit Anglorum" (Harold, who was king of the English).