One of the most popular Norse heroes among the Vikings and a larger than life character, Ragnar Lodbrok was a legendary Viking commander who became a scourge of England and France.

He received the surname Lodbrok, on account of the strange coat he wore, he was also known as 'Hairy Breeches' which name he was given because of the trousers he wore made from animal skin which his wife had made him. Ragnar claimed descent from the great Odin, God of War himself and was linked to two famous shieldmaidens, Lathgertha in the Gesta Danorum, and Queen Aslaug according to the Völsungasaga. 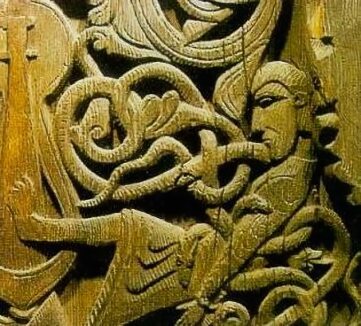 Several of the tales about Ragnar Lodbrok seem to originate with the deeds of several Viking heroes and his historicity remains a disputed issue among historians. Ragnar Lodbrok is referred to in several sources including the Anglo-Saxon Chronicle, the Tale of Ragnar Lodbrok, a sequel to the Völsunga saga, the legendary saga the Tale of Ragnar's sons, the Ragnarsdrápa, a skaldic poem of which only fragments remain, attributed to the ninth century poet Bragi Boddason, the Krákumál, Ragnar's death-song, a Scottish skaldic poem and the Gesta Danorum, written in the twelfth century by the Christian chronicler Saxo Grammaticus. The Frankish annals, or the Annals of St. Bertin record a Viking by the name of "Reginheri" (a Latin form of Ragnar) who raided France and died in the year 845.

Ragnar was the son of Sigurd Ring and Alfild. Tradition relates that following the death of his mother, when Ragnar was still a child, Sigurd sought the beautiful Alfsol, a princess of Jutland, as his wife. Her family were opposed to him but were defeated in battle by Sigurd. Alfsol's father declared he would rather lose his daughter to Valhalla than to Sigurd Ring and gave her a cup of poison. Sigurd declared that he could not live without Alfsol and arranged for her body to be placed on a funeral pyre on board his finest ship, "then when the fire had been kindled and the ship cut adrift from its moorings Sigurd sprang aboard and, stabbing himself, was consumed by the side of the fair maiden he loved".

Ragnar led pirate raids into France many times, using the rivers to sail his fleet of longships into the heart of the Frankish empire. His most famous raid being the one he led on Paris in 845, his fleet of 120 ships sailed up the River Seine in March. The French king Charles the Bald, the grandson of Charlemagne, assembled an army to oppose them, but when the Vikings defeated one division, the remaining French forces retreated. Ragnar and his forces reached Paris during Easter. After plundering and occupying the city, he withdrew after receiving payment of 7,000 French livres from the French king. He continued the series of successful raids against France throughout the mid-ninth century and fought numerous civil wars in Denmark. 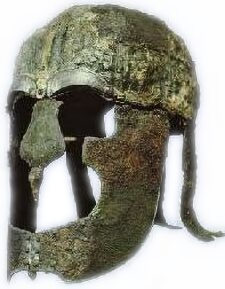 Ragnar was shipwrecked on the Northumbrian coast, he and his crew survived the wreck but after meeting the Northumbrians in battle, most of his men were killed and he was captured by Ælle, King of Northumbria, who ordered him executed by throwing him into a pit filled with poisonous snakes. The legend of the Krákumál, which was probably written in Iceland during the twelfth century, reports that Ragnar sang his death song, exhibiting pride that he would soon enter Valhalla, and expressed confidence that bloody revenge would be reeked by his sons:-

"It gladdens me to know that Baldr's father (Odin) makes ready the benches for a banquet. Soon we shall be drinking ale from the curved horns. The champion who comes into Odin's dwelling (Valhalla) does not lament his death. I shall not enter his hall with words of fear upon my lips. The Æsir will welcome me. Death comes without lamenting. Eager am I to depart. The Dísir summon me home, those whom Odin sends for me (Valkyries) from the halls of the Lord of Hosts. Gladly shall I drink ale in the high-seat with the Æsir. The days of my life are ended. I laugh as I die."

According to legend, Ragnar was married three times, firstly to the shieldmaiden Lagertha, and later to the noblewoman Þóra Borgarhjortr, and to Aslaug, who, according to to the Tale of Ragnar Lodbrok, written in the thirteenth century, was the daughter of Sigurd and the shieldmaiden Brynhildr. Ragnar left several sons, Ivar the Boneless- a Viking leader and by reputation also a berserker, and Hubba, Björn Ironside, Sigurd Snake-in-the-Eye, and Halfdan Ragnarsson. Legend relates that on hearing the news of the manner of their father´s death, the Viking sagas relate that his sons Ivar the Boneless and Ubbe swore to avenge him. It is said that when the sons of Ragnar heard news of how their father had met his death, Halfdan, who was playing chess gripped the piece so hard that blood issued from his fingernails. They crossed the North Sea in 866 with a huge fleet (referred to by contemporary sources as the 'Great Heathen Army').

They captured King Edmund of East Anglia, Ivar had Edmund bound to a tree, whereupon Vikings shot arrows into him until he died. He was then beheaded.

They sacked the city of York and met King Ælle in battle, who was defeated and captured. Ælle was subjected to the blood eagle, a gruesome Viking method of torture and execution that is sometimes mentioned in Nordic saga legends. It was performed by cutting the ribs of the victim by the spine, breaking the ribs so they resembled blood-stained wings, and pulling the lungs out through the wounds in the victim's back. Salt was sprinkled in the wounds. However, earlier English sources do not refer to Ælle's supposed gruesome death and record that both Ælle and Osberht perished in battle, the Anglo-Saxon Chronicle stating that "both the kings were slain on the spot".

These wars were to be a prelude to the long struggle of Alfred the Great against the Danes a generation later.