Alfred Atheling was born circa 1008, the second son of the King Æthelred the Redeless and his second wife Emma of Normandy, the daughter of Richard I 'the Fearless', Duke of Normandy.

Ethelred sent Emma and her children to her brother Richard II, in Normandy to escape a pending invasion by Sweyn of Denmark in 1013, he soon fled before Sweyn and joined his family, but the death of Sweyn in February 1014 enabled their return to England. In 1015 Sweyn's son, Canute invaded England. In April 1016, Alfred's father King Ethelred died, the Londoners chose Edmund Ironside, Ethelred's eldest son by his first wife Elfgifu of York as king, but the Witan opted for Canute. 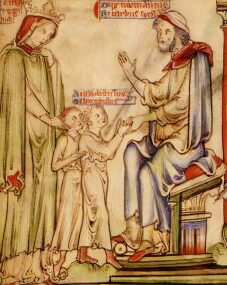 Following a series of engagements with Edmund, Canute defeated him at Ashington, Essex. A treaty was drawn up, partitioning the country which would remain in force until the death of one of the participants to the treaty, at which time all lands would revert to the survivor. Edmund II died a month later in November of 1016 and Canute was proclaimed King of England. He repudiated his wife, Elgiva and married Emma, her sons Edward and Alfred were sent into exile in Normandy.

In 1035, Canute died and the throne was siezed by his illegitimate son Harald 'Harefoot', the House of Atheling made attempts to recover the throne of England. Edward and Alfred, in exile in Normandy, gathered a fleet and sailed for England. On approaching Southampton, the elder of these, Edward, found the town up in arms against him, unwilling to accept any son of the weak and hated Ethelred. Edward had little choice but to return to Normandy.

Alfred landed on the Sussex coast with a Norman mercenary bodyguard and intended to travel to London. He was captured by Earl Godwin of Wessex, and brutally blinded, He suffered an agonizing death at Ely soon after due to the trauma of the wounds and was buried at Ely Cathedral. The Anglo-Saxon Chronicle records:-

'As Alfred and his men approached the town of Guildford in Surrey, thirty miles south-west of London, they were met by the powerful Earl Godwin of Wessex, who professed loyalty to the young prince and procured lodgings for him and his men in the town. The next morning, Godwin said to Alfred: "I will safely and securely conduct you to London, where the great men of the kingdom are awaiting your coming, that they may raise you to the throne." This he said in spite of the fact that the throne was already occupied by the son of Knud, Harold Harefoot, and he was actually in league with King Harold to lure the young prince to his death. Then the earl led the prince and his men over the hill of Guildown, which is to the west of Guildford, on the road to Winchester, not London. Perhaps the prince had insisted on continuing his journey to his original destination, his mother's court in Winchester, in any case, Godwin repeated his tempting offer; showing the prince the magnificent panorama from the hill both to the north and to the south, he said: "Look around on the right hand and on the left, and behold what a realm will be subject to your dominion." Alfred then gave thanks to God and promised that if he should ever be crowned king, he would institute such laws as would be pleasing and acceptable to God and men. At that moment, however, he was seized and bound together with all his men. Nine tenths of them were then murdered. And since the remaining tenth was still so numerous, they, too, were decimated. Alfred was tied to a horse and then conveyed by boat to the monastery of Ely. As the boat reached land, his eyes were put out. For a while he was looked after by the monks, who were fond of him, but soon after he died, probably on February 5, 1036.'

When Alfred's maternal half-brother Hardicanute succeeded his own half-brother Harald, he prosecuted Earl Godwin and Lyfing, Bishop of Worcester and Crediton, for their part in Alfred's murder, the Bishop lost his see for a while, Earl Godwin appeased the king by presenting him with the gift of a warship carrying eighty fighting men and swore that whatever he had done was in obedience to King Harald, he was acquitted and managed to retain his extensive estates.

On the death of Hardicanute, Queen Emma held Wessex as regent for her son Edward, who succeeded Hardicanute in 1042, restoring the House of Wessex to the throne. In common with Harthacnut, Edward considered Godwin to be responsible for Alfred's death and his belief caused much mistrust and resentment towards Earl Godwin and his sons.

During the 1920s the remains of several hundred men, probably Norman soldiers, were unearthed to the west of Guildford. The men were bound and had been executed. The grave has been dated circa 1040. It is thought likely that they were the guards of Alfred.