Thurbrand the Hold was an early eleventh-century Northumbrian nobleman believed to be of Danish descent. He was probably based in Holderness in the East Riding of Yorkshire. The unusual epithet, the "Hold", derives from an office said by the Norðleoda laga, meaning Law of the North People, to have been equal in wergild to a royal high-reeve, above a thegn but below an ealdorman. There is a strong possibility that Thurbrand was the ruler of Holderness. 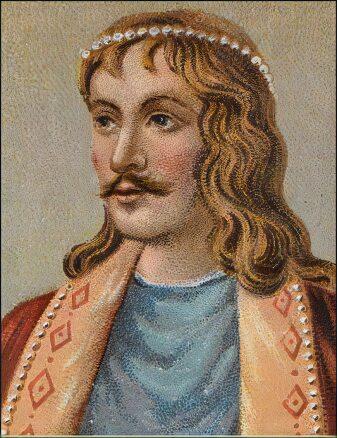 Thurbrand is recorded to be the killer of the Anglo-Saxon earl, Uhtred the Bold, Earl of Northumbria. The murder of Uhtred was part of the ensueing conflict between King Canute , King of Denmark, (pictured right), who claimed the English throne after the death of his father Sweyn Forkbeard and the Saxon King Æthelred the Redless, the reigning monarch of the House of Wessex. Uhtred supported Æthelred in his struggle against the Danish invaders.

The late eleventh or early twelfth century Durham tract known as De Obsessione Dunelmi, reveals that Thurbrand was the "leading enemy" of Styr son of Ulf. It goes on to say that Styr was a wealthy citizen, perhaps of the city of York. It is recorded that Uhtred the Bold married Styr's daughter Sige on the arrangement that he would kill his enemy Thurbrand.

Uhtred later married King Æthelred's daughter Ælfgifu as his second wife, perhaps to assure his loyalty to the king. Following Æthelred's death in 1016, Canute became engaged in a struggle with the late king's son and heir Edmund Ironside for control of England. Edmund assembled an army to resist them but his Mercian forces refused to fight the Danes and disbanded.

Edmund, undaunted went on to assemble a further army and with the assistance of Uhtred the Bold plundered the lands of Canute's supporter, the treacherous Eadric Streona in Staffordshire, Shropshire, and Cheshire. Uhtred then returned to Northumbria, where his lands were occupied by the Danes and he was obliged to submit to Canute.

Canute sent for Uhtred ordering him to come to him as his new lord, which he complied with, having accepted safe conduct for his journey and return. He met Canute at a place known as Wiheal to discuss terms of peace and through the treachery of Thurbrand the Hold, with assistance from Uhtred's servant, Wighill, the king's soldiers who had hidden behind a curtain spread across the width of the hall, sprang out in mail and slaughtered Uhtred and forty of his chief men who had accompanied him. Uhtred was succeeded in Bernicia by his brother Eadwulf Cudel. Canute appointed the Norwegian, Eric of Hlathir, ealdorman in southern Northumbria.

Several sources add that one of the nobles killed with Uhtred was Thurcytel son of Nafena. The killing has been dated to 1016, the location, given as Wihea, has been identified as Wighill, which lies just to the northwest of the Roman road north of Tadcaster but south of York. Another possibility is Worrall near Sheffield, which is spelt Wihala and Wihale in the Domesday Book.

The result of the murder of Uhtred the Bold was a long-standing Anglo-Saxon blood feud. Thurbrand met his death at the hands of Uhtred's son, Ealdred, Earl of Bamburgh, in around 1024. One son of Thurbrand is known, Carl. Carl was known to have had four sons; two of them, Canute and Sumarlithr, are known definitely by name, and the eldest is thought to have been Thurbrand of Settrington, whose land was taken by Berengar de Tosny after the Norman conquest of Northumbria.

As one of Thurbrand's Descendents, Canute held land in the East Yorkshire peninsula of Holderness, it has been suggested that Thurbrand may have been the hold from whom the peninsula gained its name, "Cape of the Hold". Ealdred was killed in turn by Carl. Ealdred's daughter Ealdgyth was married to Ligulf, their daughter, Aelfflaed, was the first wife of Siward, Earl of Northumbria and her son was Waltheof, Earl of Northumbria.

During the reign of William the Conqueror, two of Carl's sons in turn were killed when they were feasting together at another family estate near York, by Ealdred's grandson Waltheof. Earl of Northumbria.