In 1054, Waltheof's elder brother, Osbjorn, while accompanying his father on campaign in Scotland, was killed at the battle of Dunsinane, while fighting in support of the claims of Malcolm Canmore, son of Duncan, King of Scots, against King Macbeth. His brother's untimely death left Waltheof, who was the second son, as his father's heir.

The great warrior Earl Siward, reported by contemporaries to be a giant of a man in stature, died not in battle, but much to his disdain, in his bed, of dysentry in 1055, during which he bemoaned the fact that instead of dying in one of the many battles he had fought in, he was forced to die like a cow. He insisted on being dressed in his battle armour, with helmet on his head and axe and shield in hand so he could end his days like a warrior and thus attired went to meet his maker.

As his heir Waltheof, was at the time still a young child, King Edward the Confessor appointed Tostig, the unruly brother of Harold Godwineson (the future Harold II) as Earl of Northumbria. Waltheof grew up to be a devout and charitable man, he had probably been educated for a religious life. 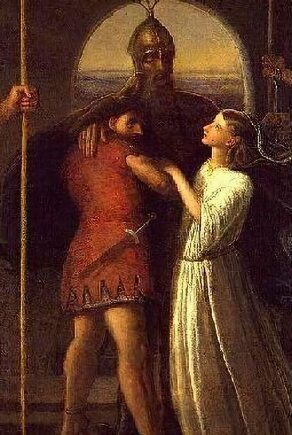 The Northumbrians rose in revolt against the tyrannical rule of Earl Tostig in 1065, when the thegns demanded that the earldom be granted to Morcar, brother of Edwin, Earl of Mercia. The southern part of the earldom was granted to Waltheof who acquired the title Earl of Huntingdon.

Following the Norman victory at Hastings in 1066 Waltheof submitted to King William I and thereby retained his title and estates. Waltheof was among the hostages, along with Earls Edwin, Morcar and Stigand, Archbishop of Canterbury, who were taken to Normandy in 1067 and remained there until mid 1068.

Sweyn Astrithson of Denmark, who had a plausible claim to the English throne, invaded Northern England in 1069 to avenge the death of his cousin, Harold II, at Hastings. Waltheof along with his cousin Gospatric, Earl of Northumbria and Edgar Atheling, the last representative of the old Saxon House of Wessex, who had a strong claim to be the heir of Edward the Confessor, allied with the Danes and rose in rebellion, attacking York and destroying the Norman garrison there. Waltheof is reported to have beheaded the fleeing Normans with his great battle-axe in the sagas.

William responded with the Harrying of the North, adopting a devastating scorched earth policy, the Danes were bought off but Waltheof and a small force of his followers alone fought on against the Normans, holding out near Coatham on the coast until he was forced again to submit to William. Waltheof was pardoned and restored to his earldom, he married William's niece, Judith of Lens, in 1070. Judith was the daughter of Lambert II, Count of Lens and Adelaide of Normandy, Countess of Aumale. They had three children:-

(3) Uchtred of Tynedale married Bethoc; daughter of Donald III, King of Scotland, their daughter, Hextilda, married Richard Comyn, Justiciar of Lothian and became ancestress of the Comyn family. Among Uchtred's sixteenth century descendants were William Tyndale, the first translator of the Bible into modern English.

Arms of Waltheof, Earl of Huntingdon 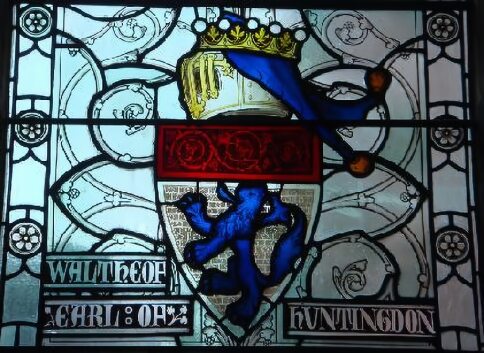 Waltheof became involved in a long-standing Anglo-Saxon blood feud with members of the family who had killed his maternal great-grandfather, Uhtred the Bold, and his grandfather Ealdred. Blood feuds between families in Anglo-Saxon England were a vicious cycle of retribution that often lasted for generations. Uhtred had been killed by Thurbrand the Hold, his son Ealdred subsequently avenged his father by killing Thurbrand, but Ealdred, in turn, was killed by Thurbrand's son, Carl. Waltheof had his huscarls ambush and kill most of Carl's sons and grandsons.

Waltheof participated in The Revolt of the Earls of 1075- the last serious resistance to William's rule in England. The motives for his involvement are uncertain, but he seems to have had second thoughts and confessed his guilt first to Archbishop Lanfranc who advised him to go in person to William, at the time in Normandy. He returned to England with William, the appearance of another Danish fleet in the Humber led William to detain Waltheof in close confinement. His Norman wife Judith betrayed him accusing him of complicity after which, although Lanfranc insisted on his innocence, he was tried for treason and sentenced to death. All of Waltheof's possessions were granted by William to Judith.

After being imprisoned for a year, which he is reported to have spent in prayer and fasting, he was executed by beheading on May 31, 1076, at St. Giles's Hill, near Winchester. Waltheof is said to have caused such a delay on the scaffold by piously reciting the Lord's Prayer, that the headsman grew impatient and took off his head after the words "Lead us not into temptation. Witnesses later attested that his severed head finished with “but deliver us from evil. Amen”. His body was thrown in a ditch, but was later retrieved and was buried by Abbot Ulfkettle in the chapter house of Croyland Abbey in Lincolnshire, of which Waltheof had been a generous patron. The skald Thorkill Skallason wrote of Waltheof:- 'William crossed the cold channel and reddened the bright swords, and now he has betrayed noble Earl Waltheof. It is true that killing in England will be a long time ending; A braver lord than Waltheof Will never be seen on earth.'

In 1092, after a fire in the chapter house, the abbot of Croyland had the body of Waltheof moved to the abbey church. When the coffin was opened, the corpse was said to be found to be intact with the severed head re-joined. This was regarded as a sure sign of sanctity, and the abbey, which had a financial interest in the affair, did not fail to publicise it. As a result, pilgrims began to visit Waltheof's tomb and miracles were later reported there.