Morcar was the younger son of Ælfgifu, daughter of Morcar and Ælfgar, earl of Mercia, one of the most powerful earldoms of Anglo- Saxon England, and grandson of Leofric and Godiva, who, according to legend, rode naked through the streets of Coventry in order to gain a remission of the oppressive taxation imposed by her husband on his tenants.

In 1064 the unruly Tostig, Earl of Northumbria, son of the powerful Earl Godwine ordered the arrest and execution of thegns Gamel and Ulf, who had complained about his heavy taxation. Later the same year he arranged the murder of Gospatric.

This culminated in a meeting of over 200 thegns in York on 3rd October 1065, who, outraged by the tyrannical rule of Tostig, elected Morcar as their new leader. He courted popularity with the Bernicians by granting the government of the country beyond the Tyne to Oswulf, the eldest son of Eadwulf, the Bernician earl, who had been slain by Earl Siward in 1041. 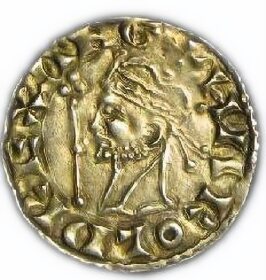 After slaughtering some of Tostig's followers, the thegns marched south. They were met at Northampton by Morcar's elder brother, Edwin, Earl of Mercia, who led a force of Mercians and Welshmen to join them. Edwin had succeeded to his father's title and lands on the death of the latter in 1062. King Edward the Confessor accordingly called a meeting of his nobles at Britford and dispatched Tostig's brother, Harold Godwineson to deal with the situation.

At a meeting held at Oxford, Harold acceded to the demands of the thegns, Tostig was banished from the kingdom and Morcar, Harold's brother-in-law, was appointed the new Earl of Northumbria.

Following the death of Edward the Confessor, Harold became king. Although he already had a handfast wife, Edith Swanneschals, or 'the Fair' in a bid to secure the support of Earls Edwin and Morcar, he married their sister, Edith Ravenhair. Edith was the widow of Gruffydd ap Llywelyn of Wales and was described by William of Jumièges as a woman of considerable beauty. Her first husband, Gruffydd had been killed during Harold's invasion of Wales during the reign of Edward the Confessor. She had three children by her first marriage to Gruffydd, two sons, Maredudd and Idwal, and a daughter Nest. Harold had several children with his Edith Swanneschals, it has been suggested, but unproven, that Edith may have been the mother of Harold's son, Harold.

In early September 1066, Tostig, in alliance with Harald Hardrada, King of Norway, sailed along the coast with 300 ships, plundering and burning the town of Scarborough on the Yorkshire coast. He then sailed into the Humber and Ouse, landing at Ricall around ten miles south of York. Harald and Tostig then marched toward York. Morcar and Edwin marched south out of the city to confront them and on 20th September met Tostig's army at Gate Fulford, blocking their advance to York. Although the Saxons were heavily outnumbered, the fighting was fierce and bloody, with heavy casualties on both sides, but as the day progressed, the English spirit broke and they fled, the armies of Mercia and Northumbria were cut to pieces, many of the fleeing Saxons were drowned in the river. York then surrendered to Tostig and Harald on the 24th September, who celebrated their victory there.

Five days later, King Harold, who had marched north to confront them, launched a surprise attack on the invaders and defeated Tostig and Harald Hardrada at the Battle of Stamford Bridge, during which both were slain. He then proceeded south in haste to meet William of Normandy in their fateful encounter at Hastings. Morcar was reluctant to join Harold at Hastings, he and his brother Edwin arrived in London after the battle, they sent their sister Aldgyth, Harold's widow, to Chester, and urged that one of them should now ascend the throne. Although they later concurred with the Witan's decision to elect the young Edgar Atheling, great-nephew of Edward the Confessor and grandson of Edmund Ironside, as king, they received little support and submitted to William the Conqueror at Barking after his coronation, they were accordingly allowed to retain their titles and estates.

William took Morcar and his brother, Edwin, Earl of Mercia, with him as hostages to Normandy in 1067, along with Waltheof, Earl of Huntingdon and Edgar Atheling and remained at his court until 1068, after which they were allowed to return to their earldoms. From there they organized a rebellion against William, gaining support from a large number of both English and Welsh; the clergy, monks, and the poor. The nominal head of the rebellion was the young Edgar Atheling. Edwin and Morcar advanced to Warwick, where they made submission to William, received a pardon, and were again kept at court, from where they secretly escaped.

In June 1070 the heroic Hereward the Wake held the Isle of Ely in a desperate stand against Norman rule. Morcar joined the fenland rebels, but the following year when William crushed Hereward's rebellion he surrendered on assurance of a pardon. William, however, gave him over to the custody of Roger de Beaumont. His brother Edwin was betrayed to the Normans by his own retinue and killed.

Morcar was taken to Normandy where he was imprisoned, When William was on his deathbed in September 1087, he ordered the release of Morcar. Morcar returned to England with William Rufus, the new king, but on arrival at Winchester, Rufus imprisoned him there. Nothing further is recorded about Morcar and it is assumed he died in prison.