Robert 'the Devil' Duke of Normandy

Robert the Devil, also known as 'the Magnificent', Duke of Normandy was the father of William the Conqueror, the founder of England's dynasty of Norman kings, Robert reigned as Duke of Normandy from 1027 until his death. Statue of Robert 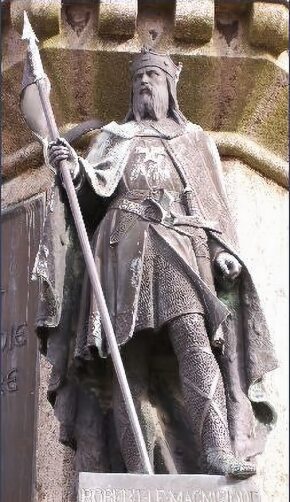 Robert was born on 22 June 1000, the son of Richard II 'the Good' Duke of Normandy. and Judith, daughter of Conan I, Duke of Brittany and his wife Ermengarde. Robert became Count of Hiémois on the death of his father Duke Richard II in August 1026, his elder brother succeeded as ruler of Normandy as Duke Richard III. Robert rose in rebellion against his brother the new duke but was defeated and forced to swear fealty to Richard.

When Richard died the following year, Robert succeeded to the dukedom of Normandy. It was rumoured that Robert had been poisoned and that his brother was implicated in his untimely death but there was no proof his involvement. Richard's son, Nicholas, retired to the safety of a monastery. Robert is usually referred to as Robert I of Normandy, but sometimes Robert II with his Viking ancestor Rollo 'the Ganger' as Robert I.

Soon after his accession as duke, Robert raised an army against his uncle, Robert, Archbishop of Rouen and Count of Évreux, possibly in revenge for the support the Archbishop had provided to his brother against him. His uncle was exiled from Normandy, which resulted in the pope excommunicating all of Normandy. The ex-communication was only lifted when the Archbishop was allowed to return and restored as Count of Evreux. Robert's cousin Hugo III d'Ivry, Bishop of Bayeux, was also banished from Normandy.

Despite his domestic problems, Robert became involved in the civil war in Flanders, fought between Baldwin V, Count of Flanders and his father Baldwin IV, whom the younger Baldwin had driven out of Flanders. Baldwin V, supported by his father-in-law, King Robert II of France, was persuaded to make peace with his father in 1030.

Robert took Herleva, daughter of Fulbert, a tanner of Falaise, as his mistress. A legend, still recounted by tour guides at Falaise, states that Robert was on the walkway of his castle at Falaise looking down on the river when he first sighted Herleva washing clothes with her skirts hitched high to keep them dry. The walkway on the roof still looks down on the dyeing trenches cut into stone in the courtyard below. The exact date of their son William's birth is unknown but is believed to have taken place sometime between September 1028 and September 1029. Herleva also presented Robert with a daughter, Adelaide. Sometime after the birth of William, Herleva's father Fulbert became chamberlain to Duke Robert. The gap in their social standing rendered marriage to Herleva impossible, and she was eventually married to Herluin, Vicomte of Conteville. She was to have three children with Herluin. Odo, later Bishop of Bayeux, was probably born c. 1030, Robert, Count of Mortain, 2nd Earl of Cornwall was born circa 1031, a daughter Emma, was married to Richard LeGoz or Richard Goz, Viscount of Avranches.

On the death of Robert II the Pious, king of France in 1031, Robert offered shelter to his successor King Henry I of France against his mother, Queen Constance, who prefered the succession of her younger son Robert, Duke of Burgundy, to the French throne. In return for his assistance, Henry I granted the French Vexin to Robert. 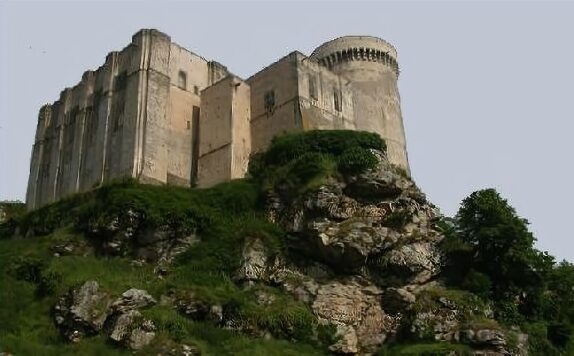 In the early 1030s Duke Robert's cousin, Alan III, Duke of Brittany began expanding his influence from the area of Rennes and appeared to have designs on the area surrounding Mont Saint-Michel. Robert sacked Dol and succeeded in repelling Alan's attempts to raid Avranches and mounted a major campaign against him. Alan appealed to their uncle, Archbishop Robert of Rouen, who at a meeting held at Mont-St-Michel negotiated peace between Robert and Alan III.

Robert's English cousins, Edward and Alfred Atheling , the sons of his aunt Emma of Normandy and Ethelred the Redeless, King of England had been guests at the Norman Court since their exile from England by the Danish King Canute. Robert sent an embassy to England biding King Canute to "give them their own," the message having been met with disdain, he attempted to mount an invasion of England on their behalf but was prevented from doing so by unfavourable winds. The Gesta Normannorum Ducum claims that Canute dispatched envoys to Duke Robert offering to settle half the Kingdom of England on Edward and Alfred. After postponing the naval invasion he chose to also leave deciding on the matter until after he returned from Jerusalem. The reinstatement of Robert Archbishop of Rouen saw a marked change in Robert's attitude towards the Church. In an attempt at reconciliation, he restored property that he or his vassals had confiscated from the church.

After extracting an undertaking from his magnates to recognise his eight year old illegitimate son William his heir, Robert set out on pilgrimage to Jerusalem, an act of penitence. According to the Gesta Normannorum Ducum, he travelled by way of Constantinople to Jerusalem, where he fell seriously ill and had to be carried in a litter, he died on the return journey at Nicaea on 2 July 1035. Robert was succeeded by his son William.

William of Malmesbury recorded that decades later William sent a mission to Constantinople and Nicaea, to bring his father's body back to Normandy for burial. However, having travelled as far as Apulia in Italy on the return journey, the envoys learned that William himself had meanwhile died. They then decided to re-inter Robert's body in Italy.