The Dukes of Normandy

Ancestors of William the Conqueror

The ancestors of William the Conqueror and England's line of Norman kings had Norwegian Viking roots. The founder of the line, Rollo or Rolf the Ganger, was a Viking raider chief, who was born in 850, at Maer, Nord-Trondelag, Norway, the son of Ragnvald 'the Wise' Eysteinson and his second wife, Hiltrude (Ragnhild) Hrolfsdottir.

Rolf was granted the region of Normandy by Charles the Simple, King of France, in 911, at the Treaty of Saint-Clair-sur-Epte, in exchange for feudal alliegiance and conversion to Christianity at which he took the baptismal name of Robert. He was baptized in a fountain fed by a spring named in honor of Saint Clair. Rolf took as his second wife Popee, the daughter of the Berengar of Rennes, the previous Lord of Normandy, the marriage produced six children:-

Rolf died at Notre Dame at Rouen, Normandy in 925.

William succeeded his father as ruler of Normandy in around 928. He was faced with opposition early in his reign. He was married twice, firstly to Sprota (Adela) of Senlis, a daughter of Hubert, Count of Senlis and Vermandois which produced issue:-

(1) Richard "the Fearless" of Normandy

He was married for a second time in 935 to Luitgarda of Vermandois, a niece of his first wife Sprota.

In 939 William Longsword became involved in a conflict with Arnulf I of Flanders. He was killed on December 17, 942 by Arnulf's supporters in the course of a meeting to discuss the conflict. An anonymous poet wrote the Planctus, lamenting his death.

Richard, the eldest son of William Longsword was born at Fecamp in France in 933. He was still a young boy when he succeeded as ruler of Normandy on the death of his father in 942. Richard's mother was a Breton concubine bound to William Longsword by a Danish marriage. After William died, Sprota became the wife of Esperleng, a wealthy miller. Normandy was seized by Louis IV of France and Richard taken into confinement, from which he eventually escaped and regained Normandy. He was responsible for introducing the feudal system into his domains.

He was married firstly in 960 to Emma of Paris (died 962), the daughter of Hugh Capet, King of France, from which marriage there was no issue and secondly to his mistress Gunnor of Crêpon, to legitimate their 8 children:-

The House of Normandy 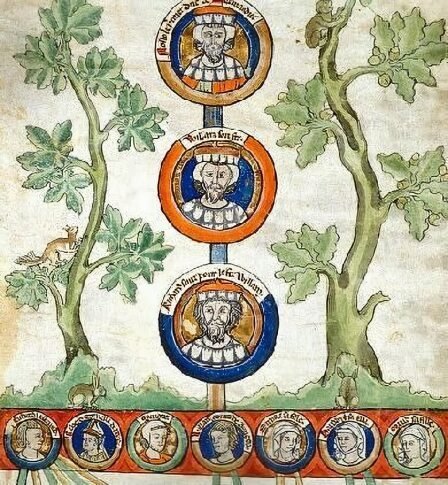 Richard 'the Fearless' died at Fecamp on 20 November, 996 of natural causes.

Richard II of Normandy was born on 23 August, 963, the eldest son of Richard I and Gunnor de Crepon. He succeeded his father in 966. His reign saw a peasant revolt and major reform of the monasteries. Following an English attack on the Cotentin, Richard attempted to improve Normandy's relations with England through marrying his sister Emma to King Ethelred II of England.

Richard marrried twice, firstly in 996 to Judith (982-1017), daughter of Conan I of Brittany, this marriage produced six children:-

He was married secondly to Poppa of Envermeu, by whom he had two sons:-

Richard III was born in 997 and succeeded his father as Duke of Normandy in 1027. He was married to Adela of Contenance (1009-1063) daughter of Robert II of France. The marriage produced two daughters:-

After a short reign of only a few months, he died in mysterious circumstances, some suspected his brother Robert to be responsible for his death.

Robert the Magnificent otherwise known as Robert the Devil was born around the year 1000, the second son of Richard the Good of Normandy and Judith of Brittany. Robert gave aid to both the French King Henry I and his English royal relatives of the Saxon House of Wessex. He gave refuge to his cousins Edward (later Edward the Confessor) and Alfred, when they were exiled under the Danish Kings of England.

Robert had two children by his mistress Herleva or Arlette, the daughter of Fulbert a tanner of Falaise:-

Although they had a long relationship, the gap in their social standing rendered marriage out of the question and Herleve was married off to one of Robert's vassals, Herluin, a knight. From this marriage, Herleve produced two further sons, Robert, who later became Count of Mortain and Odo, destined to become Bishop of Bayeux

Duke Robert embarked on a pilgrimage to Jerusalem early in 1035 and died at Nicaea on the return journey. Robert II was succeeded by his illegitimate son William, who was to go down in history as William the Conqueror.

Robert was the oldest son of William the Conqueror and Matilda of Flanders and was born circa 1051. His nick-name of Curthose, meaning short clothing was acquired when his father teased him as a child for having short legs. Although he rebelled against his father in his lifetime, he succeeded to the Dukedom of Normandy on the Conqueror's death in 1087. England was left to the third son, William Rufus. Robert was married to Sybilla, daughter of Geoffrey of Brindisi, Count of Conversano, by whom he had a son:-

Robert Curthose took part in the First Crusade, to finance his involvement, he pawned Normandy to his brother. On the death of William II in 1100, the English throne was seized by the youngest of the Conqueror's sons, Henry I, leading Robert to launch an unsuccessful invasion of England to retake the crown. Henry invaded Normandy in 1105, capturing it from his brother. Robert was taken captive at the Battle of Tinchebrai in 1106 and was to spend the rest of his life as Henry's prisoner. Willliam Clito died as a result of wounds acquired at the Siege of Aalst in 1128, marking the end of Robert's line. Robert himself died at Cardiff Castle in 1134 in his eighties.