William, known as the Atheling, an Anglo-Saxon term meaning of royal blood, or prince was the son of King Henry I and Edith, or Matilda of Scotland and was born at the old Anglo-Saxon capital of Winchester on 5 August 1103 . William 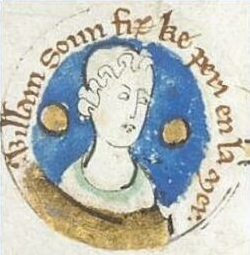 William's father Henry I was the youngest son of William the Conqueror and Matilda of Flanders, his mother, Edith was the daughter of Malcolm III 'Canmore' King of Scots and St. Margaret. Margaret was the sister of Edgar Atheling, the last male descendant of the old Saxon line, and a granddaughter of the Saxon King Edmund Ironside, she was also the great-niece of King Edward the Confessor. William, therefore, represented the line of England's new Norman rulers and the old established Saxon dynasty of Wessex.

Although he fathered many illegitimate children, King Henry I's hopes for the survival of his male line on the English throne rested upon William Atheling, otherwise known as Adelin, his only legitimate son, who was, according to Henry of Huntingdon, "a prince so pampered" that he seemed "destined to be food for the fire." The only other surviving child of Henry's marriage to Edith was a daughter, Matilda, born in February 1102, who after her marriage to Henry V, Holy Roman Emperor, was referred to as the 'the Empress'.

To ensure his succession to Normandy, William was invested as Duke of Normandy during his father's lifetime. Henry I decided on the investiture as a means of attempting to avoid doing homage to Louis VI of France, the feudal overlord of Normandy. As a king in his own right, Henry felt doing homage to his equal demeaning to his position as a king, and in 1115 he offered to have his son William perform the act of homage instead.

At the age of sixteen, William fought with his father at the Battle of Brémule against Louis in August 1119, a decisive victory for Henry. His cousin and rival claimant to Normandy, the eighteen year old William Clito, the son of his father's older brother, Robert Curthose, had ridden as a new knight amongst King Louis's guard in the battle and barely escaped capture. The next day, William, in a familial and kindly gesture, returned his cousin's horse, lost in the battle along with its valuable accoutrements. Louis eventually accepted the offer of William's homage in 1120, and he performed the act of homage to Louis VI in the summer of 1120.

William's mother Queen Edith died in 1118 while he was absent fighting in Normandy with his father, he was then appointed in her position as Regent in England during his father's absence and was closely advised in this role by Roger, Bishop of Salisbury. a marriage was arranged for William to Matilda of Anjou, eldest daughter of Count Fulk V of Anjou in February 1113. The marriage was designed to secure the loyalty of Anjou, a long-time rival of Normandy. The marriage of William and Matilda was celebrated in June 1119 in Lisieux.

Sinking of the White Ship 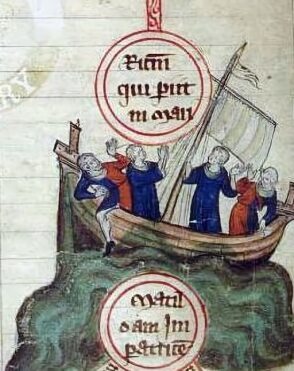 William met his premature death in the tragedy White Ship on 25 November 1120. The Prince and his companions were returning to England from Barfleur in Normandy in the White Ship, the swiftest vessel in the royal fleet. After drinking on the shore until after dark and providing the crew with drink in abundance, William and his retinue, which included his illegitimate half brother Richard of Lincoln and his illegitimate sister, Matilda FitzRoy, Countess of Perche, boarded the White Ship and set sail. The ship's captain, Thomas FitzStephen, was ordered by the revellers to overtake the king's ship which had already set sail, confident they could overtake the king in the swiftest ship in the royal fleet. In the middle of the night the helmsman, being the worse for the drink, crashed the ship's port side into a rock in the bay.

The crew could not lever the stricken ship off the rock, or prevent it from filling with water; however, William and several of his friends managed to launch a small boat and escape the wreck. He could have escaped but hearing the cries for help of his half-sister Matilda, turned back in an attempt to rescue her. William's small boat was swamped by others desperately trying to save themselves, and William drowned along with them.

The chronicler Orderic Vitalis records that only two survived the tragedy by clinging to the rock all night, a butcher from Rouen, and Geoffrey de l'Aigle. The ship's captain Thomas FitzStephen came to the surface after the sinking and on hearing that William had not survived, he let himself drown rather than face the wrath of the King. Henry of Huntingdon, recording the disaster, stated that William, "instead of wearing embroidered robes...floated naked in the waves, and instead of ascending a lofty throne...found his grave at the bottom of the sea."

Henry I, deeply grieved the loss of his son and appointed his daughter Matilda 'the Empress' as the new heir to England, which eventually led to Civil War in England. William's wife Matilda had fortunately travelled on another ship at the time of the wreck and survived him. She remained at Henry's court and was treated as one of the king's daughters, until returning to her native Anjou. She later becomes a nun and eventually, Abbess of Fontevrault.