Son of William the Conqueror

Robert Curthose was the eldest son of William the Conqueror, the first Norman king of England, and Matilda of Flanders, his nickname, Curthose, derives from the Norman French 'Courtheuse', was acquired when his father teased him as a child for having short legs.

Robert's birthdate is generally given as 1054 but may have occurred in 1051. In his youth, he was reported to be courageous and skilful in military exercises. He was, however, also prone to laziness and weakness of character, which discontented nobles and the King of France exploited to stir discord with his father William. Robert was unsatisfied with the share of power allotted to him and was often at odds with his father and his younger brothers, William and Henry. 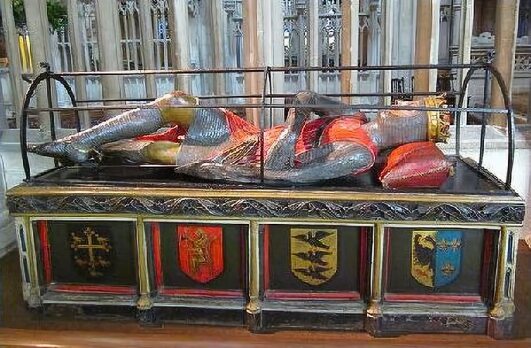 Robert was described in the Gesta Regum Anglorum of William of Malmesbury (c.1080-1143) as [A]lready considered as a youth of excellent courage... of tried prowess, though of small stature and projecting belly... he was neither ill-made, nor deficient in eloquence, nor was he wanting in courage or resources of the mind."

In 1077, Robert led a revolt against his father, the result of a prank played by his brothers William Rufus and Henry, who bored with playing dice, had thought it amusing to empty a full chamber-pot over his head from an upper gallery, to the great delight of them both. A scuffle ensued with the fiery tempered Robert, which their father was forced to break up. Robert was further angered when William failed to punish the amused offenders. The following day Robert and his followers attempted to seize the Rouen Castle. The siege was a failure, and King William ordered their arrest. Robert and his followers took refuge with Hugh of Chateauneuf-en-Thymerais.

They were forced to flee again when King William attacked them at Rémalard. Robert fled to Flanders, where he was given refuge at the court of his uncle, Robert I, the Count of Flanders. He plundered the Norman Vexin, causing William King William to ally himself with King Philip I of France to curb his rebellious son. Relations were not helped when King William discovered that Robert's mother, Queen Matilda, was secretly sending her son money. At a battle in January 1079, Robert unhorsed King William in combat and wounded him, ceasing his attack only when he recognized his father's voice. Humiliated, King William cursed his son then raised the siege and returned to Rouen. 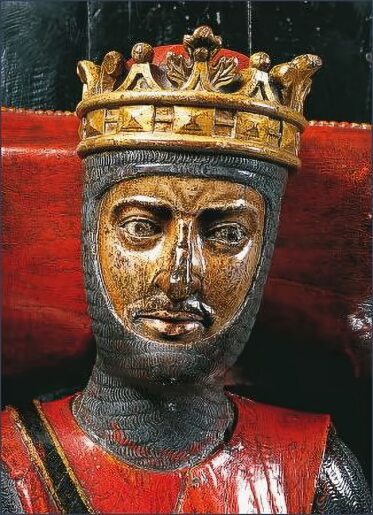 At Easter 1080, reconciliation between father and son was engineered by Queen Matilda, the truce lasted until her death in 1083. Robert left William's court soon after his mother's death and spent several years travelling throughout France, Germany and Flanders. During this period Robert sired several illegitimate children. His illegitimate son, Richard, spent much of his life at the royal court of his uncle William Rufus and was killed in a hunting accident in the New Forest in 1099 as Rufus was the following year. An illegitimate daughter was later married to Helias of Saint-Saens.

William the Conqueror died in 1097, on his deathbed he summoned his younger sons, William and Henry. Robert Curthose remained at the court of France. England was bequeathed to his second surviving and favourite son, William Rufus and despite his bitter differences with Robert Curthose, he left Normandy to him. To Henry, the youngest son, later destined to inherit all his dominions, he left 5,000 silver pounds.

At the time of their father's death the two brothers made an agreement to be each other's heir. However this peace lasted less than a year, when the barons, including Robert's uncles Odo, Bishop of Bayeux and Robert, Count of Mortain joined with Robert against William Rufus in the Rebellion of 1088. The rebellion failed, partly because Robert never appeared to support the rebels. Rufus invaded Normandy in 1091, taking large areas of the Dukedom from Robert. Peace was eventually made between the warring sons of the Conqueror and together they embarked on a campaign to win back Maine and Cotentin from their youngest brother, Henry, After a siege which lasted fifteen days, Henry was forced to capitulate and surrender the Cotentin.

In 1096, Robert embarked for the Holy Land on the First Crusade. To raise money for the crusade he mortgaged his duchy to his brother William for the sum of 10,000 marks. He fought at Dorylaeum in 1097 and was present at the capture of Jerusalem in 1099. His courageous leadership contributed to the victory at Ascalon in 1099.

When William II was killed in a 'hunting accident' in the New Forest on 2 August 1100, Robert was on the return journey from the Crusade. As a result of his absence, his younger brother Henry was able to seize the crown. Upon his return, Robert claimed the crown of England based on the agreement with Rufus of 1087. In 1101, he crossed the Channel with an army and landed at Portsmouth in July. Henry I, had expected him at Pevensey where he had assembled his troops, Robert headed towards London but was intercepted by Henry at Alton in Hampshire. Robert was persuaded to renounce his claim to England in return for a pension of 3,000 marks a year and the abandonment of any claim on Henry’s part to Normandy.

Robert married Sibylla of Conversano, the daughter of Geoffrey of Brindisi, Count of Conversano, in Apulia in 1100. A son William, known as the Clito was born on 25 October 1102. 'Clito' was a Latin term equivalent to the Anglo-Saxon 'Aetheling', meaning Prince. 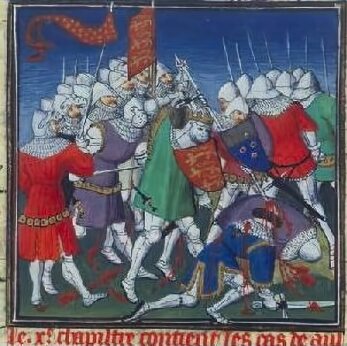 Ranulf Flambard, imprisoned in the Tower of London, affected a daring escape and joined Robert Curthose in Normandy in 1101. Flambard, an astute but much-disliked financial adviser, had been previously a close adviser to his father.

In 1105 Henry I invaded Normandy and In 1106, met Robert's army at the Battle of Tinchebray. Robert was supported by William of Mortain, Robert of Bellême, Robert d'Estoutville, William Crispin and Edgar Atheling, the nephew of Edward the Confessor and the last of the royal Saxon House of Wessex. Robert's forces attacked first. William of Mortain charged Henry's lines and drove back his opponents but was surprised by the appearance of English reserves who broke the Norman army, the battle lasted less than an hour. Robert of Belleme and the Norman army fled the field, to the chants of "Hastings avenged!" from the English army. The rest of the Norman army was either killed or captured. Henry claimed Normandy as a possession of the English crown.

Robert was captured along with Edgar Atheling in the aftermath of the battle and imprisoned in Devizes Castle for twenty years before being moved to Cardiff, where he learned Welsh and wrote at least one poem in the language. It contains the line 'Woe to him that is not old enough to die.'

Robert's only legitimate son, William Clito, Count of Flanders, was killed while besieging Aalst on 12 July 1128. During the siege, he was wounded in the arm in a scuffle with a foot soldier. The wound became gangrenous and William died at the age of twenty-five on 28 July 1128. He left no children and survived by his imprisoned father for six years.

In 1134, Robert died at Cardiff Castle in his early eighties. He was buried in the abbey church of St. Peter in Gloucester. His effigy carved in bog oak, however, lies on a mortuary chest decorated with the attributed arms of the Nine Worthies. The effigy dates from about 100 years after his death and the mortuary chest much later. The church subsequently has become Gloucester Cathedral.