William Peverel was granted extensive lands in Derbyshire and Nottinghamshire by King William the Conqueror in reward for supporting him during the Norman Conquest of England. His name is listed in the Roll of Battle Abbey.

Peverel is thought to have been the illegitimate son of William the Conqueror although this claim remains unsubstantiated, tradition states that Peverel was the son of the Conqueror by a Saxon princess Maud Ingelrica and was born prior to the king's marriage to Matilda of Flanders. Peveril Castle

William Peverel certainly was a favourite of William I. He was generously rewarded after the Norman Conquest of England, being granted over a hundred manors in central England by the king.

There are two possible explanations for the origins of the surname Peverel. J.R. Planché believed it was sourced from the Latin puerulus, the diminutive form of puer (a boy), thus "a small boy", or from the Latin noun piper, meaning "pepper":-

'The name of Peverel ... was not derived from a fief or a locality ... the name was Peverell or Piperell, and in Domesday we find it continually spelt Piperellus (as in) Terra Ranulphi Pipperelli (i.e. "The lands of Ralph Pipperellus"). This, however, does not illustrate its derivation, and the detestable practice of Latinising proper names only tends to confuse and mislead us, as they become in turn translated or corrupted till the original is either lost or rendered hopelessly inexplicable. It may be that like Mesquin lesser, or junior, translated into Mischinus, and distorted into de Micenis, "Peverel" is the Norman form of Peuerellus, as we find it written in the Anglo-Norman Pipe and Plea Rolls. The "u" being pronounced "v" in Normandy, and Peuerellus being simply a misspelling of the Latin Puerulus, a boy or child, naturally applied to the son to distinguish him from his father. William Peverel was therefore, literally, "boy-" or "child-William". We see in the instance of the descendants of Richard d'Avranches how Mesquin, used to distinguish a younger son, became the name of a family, and so it may have been with Peverel, which, originally applied to William, was afterwards borne by so many of his relations in England.' 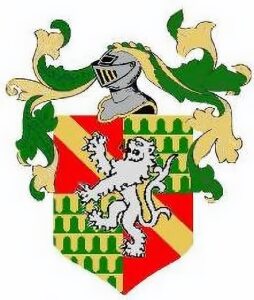 The Domesday Book of 1086 records William as the holder of 162 manors, forming collectively the Honour of Peverel, in Nottinghamshire and Derbyshire, including Nottingham Castle. He also built Peveril Castle, at Castleton in the HopeValley, Derbyshire and Lenton Abbey. William Peverel seems to have been trusted by the Conqueror and is amongst those explicitly recorded in the Domesday Book as having built castles.

Peverel married Adelina of Lancaster, by whom he had a daughter Adeliza or Adelaide in 1075 and a son, known as William Peverel the Younger who was born circa 1080, after the death of his first wife married for a second time to Avice de Lancaster, daughter of Roger of Poitou, Earl of Lancaster.

William Peverel died in 1114 and his son, known as William Peverel the Younger, succeeded to his estates. The younger Peverel supported King Stephen during the civil war of Stephen and the Empress Matilda, a time known as the 'Anarchy'. He married Avicia de Lancaster (1088 - c. 1150), the daughter of Roger Montgomery and Countess Almodis of La Marche. They had a daughter, Margaret Peverel in 1114.

In 1153 he was suspected of attempting to poison Ranulf de Gernon, 4th Earl of Chester and Matilda's son Henry Plantagenet, then Count of Anjou, accused Peverel of "plundering and treachery" and threatened to confiscate his estates and hand them over to the Earl of Chester. Two years later Henry, now King Henry II, carried out his threat. Since the Earl of Chester had by then died Henry appropriated the honour of Peverel to the crown.