The battle of Tinchebrai was fought on the 28th September 1106 near the town of Tinchebrai on the border of the county of Mortain, in the southwest of Normandy, between the armies of King Henry I of England and his brother, William the Conqueror's eldest son, Robert Curthose, Duke of Normandy. 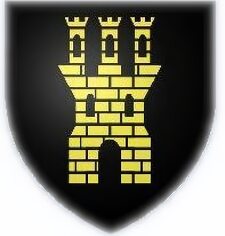 Following the death of their brother William Rufus, while Duke Robert was on crusade in the Holy Land, Henry had siezed England's crown, which as the elder brother, Robert considered to be his birthright. Henry had been present on the hunting expedition in the New Forest which resulted in Rufus' death, either by accident or design and left abruptly and in indecent haste to seize the treasury at Winchester.

In the summer of 1101 Robert accordingly invaded England, landed at Portsmouth in July, he acquired the support several powerful barons, including Robert of Belleme, Earl of Shrewsbury and William of Mortain, Earl of Cornwall. Henry I had expected him at Pevensey where he had assembled his troops, Robert headed towards London but was intercepted by Henry at Alton in Hampshire. Robert was persuaded by his brother to sign the Treaty of Alton under the terms of which he renounced all his rights to the English throne in return for a considerable annual pension. 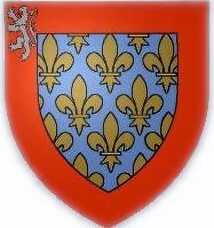 The wily Henry had no intention of keeping up the payments of the pension he had promised to Robert and instead had his sights set on conquering the Duchy of Normandy. Robert Curthose's supporters Robert of Belleme and William of Mortain were expelled from England. Robert proved to be an ineffective Duke of Normandy and much of the duchy was in a state of anarchy.

In 1104 King Henry travelled to Dumfont and took possession of the county of Evreux, he then began to undermine the authority of Duke Robert in Normandy. In 1105 he returned to the Cotentin, where he attacked and burned the town of Bayeux and received the surrender of Caen, after which he returned to England. Henry further refused Robert's requests to return the possessions he had captured in Normandy

In the August of 1106, King Henry returned to Normandy, where, with the support of the barons Ranulf Flambard, William de Warenne, 2nd Earl of Surrey and Robert de Beaumont, the Count of Meulan, besieged Tinchebrai Castle, which was at the time held by William of Mortain. 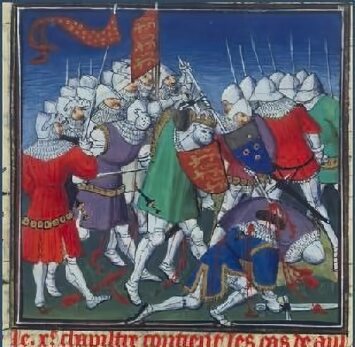 Robert Curthose and William of Mortain marched to relieve the siege of Tinchebrai. They we're joined by Robert of Belleme, Robert d'Estoutville and William Crispin as well as the Saxon Edgar Aetheling, who was the uncle of Henry's Queen, Matilda of Scotland and had accompanied Robert on his earlier crusade to the Holy Land.

Henry's force was divided into three divisions, the main two were led by Ranulf of Bayeux, Robert de Beaumont, 1st Earl of Leicester, and William de Warenne, 2nd Earl of Surrey. In addition, he had a reserve, commanded by Elias I of Maine, which was out of sight on the flank. Also fighting on Henry's side were Alan IV, Duke of Brittany, William, Count of Évreux, Ralph of Tosny, Robert of Montfort, and Robert of Grandmesil.

Robert Curthose' army began the battle by attacking the invading English. William of Mortain led the charge and succeeded in driving back Henry's lines but was surprised by the appearance of reserves from Maine and Brittany, the battle lasted less than an hour. The Saxons among Henry's army felt that fifty years later, the humiliation of Hastings had been truly avenged.

Robert of Bellême left the field without striking a blow, Duke Robert himself was captured, as was his companion Edgar Atheling, the remainder of Robert's army were either killed or taken prisoner.

Edgar Atheling later received a pardon and was released by Henry and allowed to return to his estates in Hertfordshire where he spent the rest of his life in obscurity. Robert was less fortunate and spent the rest of his life as his brother's prisoner. He was held captive in Devizes Castle for twenty years before being moved to Cardiff Castle, where he died in 1134, in his early eighties.