Edgar Atheling, the last surviving male member of the ancient Royal House of Wessex, was born in Hungary circa 1051. Edgar's father, 'Edward the Exile' was the eldest son of Edmund II known as 'Ironside', and grandson of Ethelred II 'the Redeless'. Edmund reigned briefly as King of England from April to November of 1016. After his father's death and the accession to the English throne of the Danish King Canute, the young Edward and his brother Edmund were consigned to the safe-keeping of Canute's half-brother and ally, Olof King of Sweden. They were secretly sent to Kyiv, where Olaf's daughter Engaged was the Queen. They were then sent on to Hungary, probably in the retinue of Ingigerd's son-in-law, King András. The two children were placed under the care of the King of Hungary. 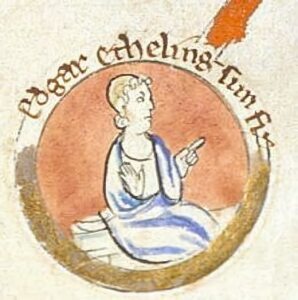 The younger son, Edmund, died without issue. The elder brother, Edward, referred to as 'the Atheling' (Anglo-Saxon, meaning Prince or of noble birth), married Agatha, who according to some sources, was possibly a niece of Henry III, Emperor of Germany, the couple had three children. Besides Edgar, the marriage produced two daughters, Margaret and Christina. Christina was later to become a nun and Abbess of Romsey, while her sister Margaret became Queen Consort of Scotland.

Edgar returned to England with his parents and siblings towards the end of the reign of his great-uncle, Edward the Confessor, who re-callled the family with a view to naming Edward Atheling as his heir. Fate however, intervened, and Edward Atheling died within months of his return to his native land. The Confessor took his nephew's grieving widow and children into his care and protection.

When King Edward the Confessor died in January 1066, Edgar was still in his early teens, too young to be a military leader, the Witangemot, or Saxon council of elders, elected Harold Godwineson, an experienced soldier and Edward's brother-in-law, as King. After the Norman Conquest and the death of Harold II at the Battle of Hastings, the Witenagemot assembled hastily in London proceeded to elect Edgar, last of the Wessex line, as King of England. Edgar, then aged about 13 or 14, submitted to the formidable William the Conqueror.

Malcolm Canmore, King of Scots and his wife St. Margaret 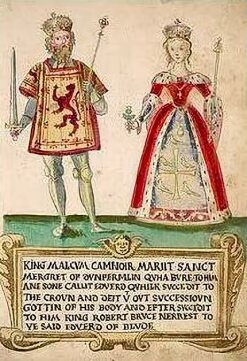 William I, resolved to keep Edgar in his custody and took him to Normandy, along with Earls Edwin and Morcar, in 1067, leaving England in the control of regents. On his return to England, Edgar may have been involved in the abortive rebellion of the Earls Edwin and Morcar in 1068, in that year he fled north with his mother and sisters to seek refuge at the court of Malcolm III 'Canmore' King of Scots. Malcolm married Edgar's eldest sister Margaret and agreed to support him in his attempt to regain the throne of England. The Northumbrians rose against William's harsh rule at the beginning of 1069 and Edgar return to England to become the leader of the revolt. After some initial success, the rebels were defeated by William at York and Edgar was again forced to flee to Scotland.

In the late summer of 1069, King Sweyn of Denmark, the late King Harold's cousin, sent a fleet of ships to England, which triggered a fresh wave of uprisings. Edgar sailed to the Humber, where he joined forces with the Northumbrian rebels, but after leading a small unsuccessful seaborne raid into Lindsey he fled with a few supporters, to rejoin the main army. Later in the year, William occupied York, buying off the Danes and laying waste to the surrounding countryside. Early in 1070, he moved against Edgar and other English leaders who had taken refuge with their remaining followers in a marshy region, possibly Holderness and forced them into flight.

Edgar returned to the safety of Scotland where he remained until 1072 when William invaded Scotland and forced Malcolm to submit to his overlordship. The terms of the Treaty of Abernethy between the two monarchs probably included the expulsion of Malcolm's brother-in-law, Edgar, from Scotland. After seeking refuge in Flanders for a while he returned to Scotland. Edgar received an offer from William's enemy, Philip I, King of France, of a castle and lands near the Norman border from which he would be able to raid Normandy. He sailed for France, but the luckless Edgar was shipwrecked on the coast of England by a violent storm. He managed to escape to Scotland yet again, where he was persuaded by Malcolm to make peace with William and return to England as his subject. In 1081, Edgar accompanied King William on an expedition through South Wales.

After the death of William the Conqueror in 1087, he was succeeded by his second son, William Rufus, although Edgar attended Rufus' coronation, he supported William's eldest son Robert Curthose, Duke of Normandy in his dispute with his brother William. William II defeated Robert in 1091 and a settlement agreed between the brothers, Edgar was deprived of lands in Normandy. Edgar returned once again to his brother-in-law in Scotland, who was preparing for war with William. William marched north to meet the King of Scots and negotiations were conducted by Edgar on behalf of Malcolm and the newly reconciled Robert Curthose on behalf of William. 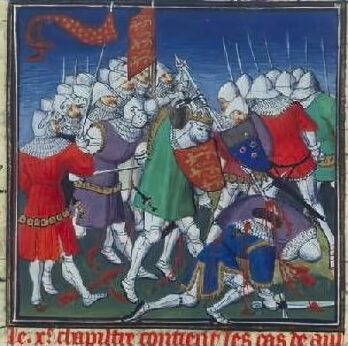 Edgar went to Scotland again in 1093, this time on a diplomatic mission for William II to negotiate with Malcolm III, who was dissatisfied with William's failure to implement in full the terms of the 1091 treaty. This unresolved dispute led to war, Malcolm invaded Northumbria and was killed in the resulting Battle of Alnwick along with Edward, eldest of his sons by Margaret.

Malcolm's brother Donald Bane usurped the Scottish throne and drove out the English and French retainers introduced by Malcolm. This led Donald Bane into conflict with William, whose influence in Scotland was now diminished. William aided Malcolm's eldest son (by his first marriage) Duncan, who had spent years as a hostage at the English court, to overthrow his uncle, but Donald Bane regained the throne and Duncan was killed. In 1097 Edgar was given command of an English army by William, which marched into Scotland and ousted Donald Bane. Edgar installed his nephew, Malcolm and Margaret's eldest surviving son Edgar, on the throne of Scotland.

Robert Curthose mortgaged his Norman estates to William in return for money to participate in the first crusade to Jerusalem, Edgar expressed a desire to accompany him. Their forces crossed the bleak Anatolian highlands to reach the outskirts of Antioch (north of Syria) by October 1097. They remained there until the town was betrayed into the hands of the Crusaders in June 1098.

Due to disagreements among their leaders, it was another year before the Crusaders reached Jerusalem, which was taken by storm on 15th July 1099, amid great slaughter. Duke Robert and Edgar Atheling distinguished themselves during this campaign, and when a new Christian kingdom was established, Robert's chaplain, Amulf, became its Patriarch. On his return journey from Jerusalem, Edgar was given rich gifts by both the Byzantine and German emperors, each of whom offered him an honoured place at court to the last scion of the Saxon royal house, but that he insisted on returning to England instead.

Edgar again took the side of Robert Curthose, this time against Robert's youngest brother who had succeeded William as King Henry I. Edgar was taken prisoner after the Battle of Tinchebray in 1106, which resulted in Robert being imprisoned by his brother for the remainder of his life. Edgar was taken back to England and pardoned by Henry. His niece Edith of Scotland, (who adopted the name Matilda) the eldest daughter of Malcolm III and Margaret had married Henry in 1100.

Edgar Atheling retired from court circles, and lived quietly on the Hampshire/Sussex border, he died shortly after 1125. There is no evidence that Edgar married or produced children apart from two mysterious references to an 'Edgar Adeling' found in the Magnus Rotulus Pipae Northumberland (Pipe rolls) for the years 1158 and 1167.