On the death of King Henry I of England, the English throne was usurped by his nephew Stephen of Blois Count of Boulogne, despite the claims of Matilda, known as the Empress, Henry's daughter and named successor.

David I, King of Scots supported the claims of his niece Matilda, the daughter of his sister, Edith of Scotland, who had married Henry I in 1100, against those of his other niece Matilda of Boulogne (daughter of Mary of Scotland and Eustace, Count of Boulogne) who was the wife of King Stephen.

Coat of Arms of David I, King of Scots 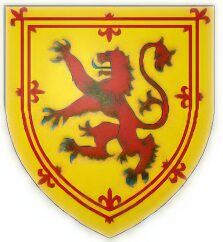 David invaded northern England twice in 1138, and on both occasions, he was repulsed by the armies of Stephen. In 1136, David had secured Cumberland.

The following year, he agreed to a truce with Stephen after a brief campaign. That November, with the expiry of the truce, David demanded the whole of Northumberland, which Stephen promptly refused to grant. In the summer of 1138, he invaded England for a third time, accompanied by his son Henry, Earl of Huntingdon, attacked the English castles on the Tweed frontier. Norham Castle, which was owned by the Bishop of Durham, quickly fell to the Scots. David dispatched forces to besiege the castle at Wark on Tweed and proceeded deeper into Northumberland.

The Battle of the Standard, sometimes called the Battle of Northallerton was fought on 22 August 1138 on Cowton Moor near Northallerton in Yorkshire. The English forces were commanded by William, Count of Aumale. King Stephen, who was engaged in fighting rebel barons in the south of England, sent a small force, but the English army was mainly composed of local militia and baronial retinues from Yorkshire and the north Midlands. Robert de Brus, an ancestor of King Robert the Bruce was sent as a peace emissary to David, along with Bernard de Balliol. A vassal of David, de Brus was rebuffed by the king and as a result, renounced his homage to David.

Battle of the Standard Monument 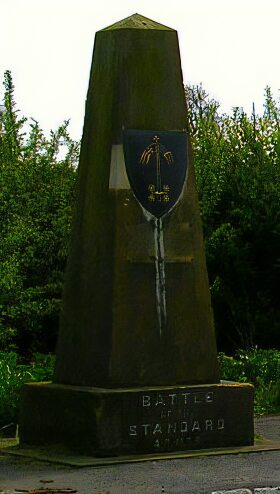 Archbishop Thurstan of York made great efforts to raise an army to oppose the Scots. The centre of the English position was therefore marked by a mast bearing a pyx carrying the consecrated host and from which were flown the consecrated banners of the minsters of York, Beverley and Ripon, from this derived the name of the battle.

Advancing beyond the Tees towards the city of York, early on 22 August 1138 the Scots encountered the English army, which had marched through the night, drawn up on open fields two miles north of Northallerton, blocking the southward advance of the Scottish army. Two small hills stood to the right of the road, the English took position on the southernmost of these. The religious standards were placed at the summit of the hill on a wagon.

The Scottish force took position on the more northerly hill and formed up in battle lines to attack in the early morning mist. The first Scottish attack failed. The Galwegian infantry, who claimed their ancient right to begin the battle, fell in large numbers under a hail of English arrows. On reaching the enemy lines, the remaining Galwegians were repulsed by the more heavily armoured enemy.

Henry, Earl of Huntingdon, accompanied by his knights led a valiant attack which forced a breach through the English battle lines but was eventually repelled as the Scottish infantry made no attempt to exploit the breach. King David then ordered his reserve forward, who turned and fled the battlefield.

Within a space of three hours, much of the Scottish host had begun to flee, apart from small bodies of knights and men-at-arms who were gathered around King David and his son Henry. David and his son then withdrew in relatively good order. While the English did not attempt a major pursuit, numerous Scots that were fleeing from the area of the battle were killed.

Scots losses in the Battle of the Standard were reported to be heavy, while English casualties were light. David, I fell back to Carlisle where he reassembled another army. Within a month, a truce had been negotiated which left the Scots free to continue the siege of Wark Castle, which fell to them in the November of 1138.

Despite losing the Battle of the Standard, King David subsequently acquired most of the territorial concessions he had been seeking. David held these throughout the period of the Anarchy, but on the death of David, his successor and grandson, Malcolm IV of Scotland was soon forced to surrender David's gains to King Henry II, the son of Empress Matilda, who succeeded Stephen as King of England.