The future William II, third son of William the Conqueror and Matilda of Flanders, was born in Normandy in around 1056 and was educated by the saintly Lanfranc. Little is known of William's childhood, although Orderic Vitalis relates an incident when the young William and his brother Henry, bored with playing dice, decided to create mischief instead and poured stinking water on their elder brother, Robert Curthose, from an upper gallery to the great delight of them both. A scuffle ensued with the fiery-tempered Robert, which their father was forced to break up. 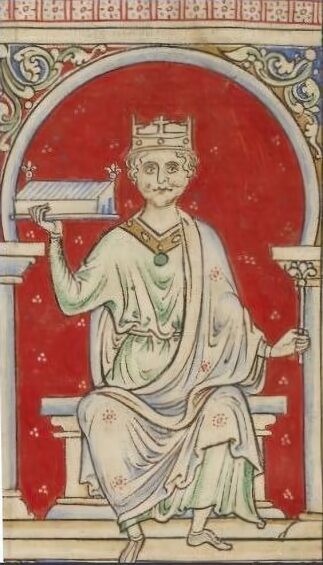 Robert Curthose rebelled against their father William the Conqueror and attempted to take Rouen. William remained loyal to his father and fought by his side, he was by his father's side, as was his brother, Henry, at his death in Rouen in 1087, Robert was conspicuously absent.

In his will, William the Conqueror left England to what was believed to be his favourite son, William Rufus, Normandy he bequeathed to his eldest son, Robert. To the youngest, Henry, he left a sum of money. An elder brother, Richard, had been killed whilst hunting in the New Forest. William was a thick-set and muscular man, built in a similar mould to his father, he had a florid and choleric complexion, from which derived his nickname 'Rufus', he had his father's red hair and eyes of different colours and spoke with a stutter.

On his accession to the throne, William II was originally content to be advised by the saintly Anselm. Initially enjoying the favour of the English people, his first act as king was to distribute part of the royal treasure to the monasteries, churches and the poor for the benefit of his father's soul. Rebellion broke out in favour of his elder brother, Robert, now Duke of Normandy, supported by his powerful uncles, Odo, Bishop of Bayeux and Robert of Mortain. The King received strong support from his English subjects and retook the rebel strongholds of Pevensey, Rochester and Tonbridge.

Rufus invaded Normandy in 1091, taking large areas of the Dukedom from Robert. Peace was eventually made between the warring sons of the Conqueror and together they embarked on a campaign to win back Maine and Cotentin from their youngest brother, Henry, After a siege that lasted fifteen days, Henry was forced to capitulate and surrender the Cotentin.

Rufus began to display uncontrolled tyranny along with his chief justiciar, the despised Ranulf Flambard. Further rebellion against his rule broke out in 1095, lead by Robert de Mowbray, Earl of Northumberland, which was put down with severity. William forced Malcolm Canmore, King of Scots to accept his overlordship. Malcolm led an uprising against him in 1093, but was treacherously killed at Alnwick. 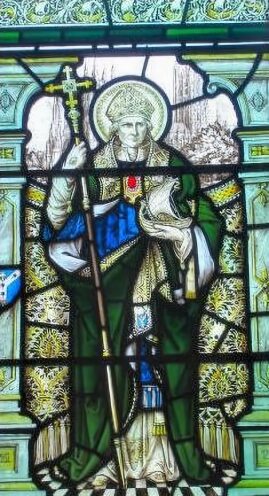 Unusual for his time, William II was not a devout son of the church but a sceptic in the matter of religion who held the church in no reverence.

He drew the strong disapproval of the church through his flaunted homo-sexuality and blatant cynicism of religion and through his practice of plundering bishoprics as soon as they fell vacant. Male fashions under Rufus became extravagant and effeminate, much to the disgust of disapproving churchmen.

Having kept the seat of Canterbury vacant for four years after the death of the saintly Lanfranc, while he appropriated its revenues, Rufus appointed the devout and learned Anselm of Bec, (portrayed right), to be Archbishop. The pair soon fell into dispute on several ecclesiastical issues.

A council was called at Rockingham in 1095 to deal with matters of contention. Anselm appealed to the Pope, arguing that as Archbishop he could not lawfully be dealt with in a secular court. The King proceeded to harass the Archbishop to the point where he could tolerate no more and in 1097 took ship for the continent, leaving Rufus to plunder his Archbishopric and profit further.

The king's feckless brother, Robert Curthose, pawned the Duchy of Normandy to him for ten thousand marks to fund an intended crusade to the Holy Land. The taxes further imposed on his groaning subjects to raise this amount caused much discontent and did not aid William's waning reputation with the English people.

He was further disliked for his rigid enforcement of the cruel and highly unpopular forest laws, introduced by his father, which inflicted the death penalty for killing the king's deer. Like his father, the Conqueror, he was said to love the chase beyond all measure.

The Anglo-Saxon Chronicle puts forward contemporary views of William II:- 'He was very harsh and fierce in his rule over his realm and towards his followers and to all his neighbours and very terrifying. Influenced by the advice of evil councillors, which was always gratifying to him, and by his own covetousness, he was continually exasperating this nation with depredations and unjust taxes. In his days therefore, righteousness declined and every evil of every kind towards God and man put up its head. Everything that was hateful to God and to righteous men was the daily practice in this land during his reign. Therefore he was hated by almost all his people and abhorrent to God. This his end testified, for he died in the midst of his sins without repentance or atonement for his evil deeds.'

The Death of William Rufus

William went hunting in the New Forest, probably near Brockenhurst, on 2 August 1100. In what was described as a 'hunting accident', he was killed when an arrow penetrated his lung, the circumstances of the incident are unclear. The arrow was fired by a nobleman named Walter Tirel, the earliest mention of the event is in the Anglo-Saxon Chronicle, which blandly records that William was "shot by an arrow by one of his own men". Later chroniclers contain the name of Tirel, along with further details.

The Rufus Stone in the New Forest 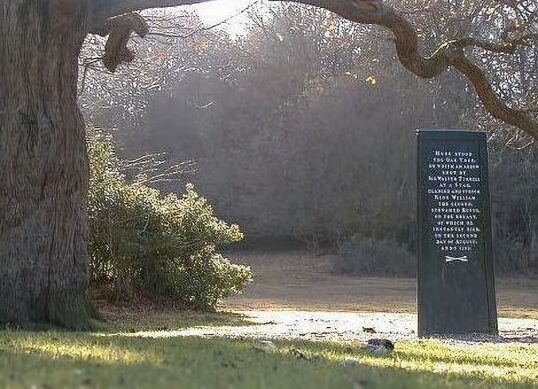 The fullest contemporary account of the incident was written by the monk William of Malmesbury, who states that the King had an ominous dream the night before which led him to feel uneasy, but nevertheless set out into the forest for an afternoon of hunting with a few companions. The party spread out as they chased their prey, Walter Tirel was the only one who stayed with the king when the party scattered in the chase. The King fired an arrow at a stag, which wounded it and shielded his eyes with his hand against the rays of the low sun to spot where it ran. Just at this point, another stag appeared on the scene and Tirel fired at it. He missed and his arrow pierced William's chest.

The King is said to have broken off the shaft which was protruding from his chest, but collapsed and fell on the remainder of the arrow, which drove it in further. Tirel is reported to have rushed to his aid, but found him unconscious and beyond help. The first record of any location more exact than the New Forest comes from John Leland, who, writing in 1530, stated that the king died at Thorougham, a place name which has since fallen into disuse but was probably located at what is now Park Farm on the Beaulieu estates.

William's body was left where he fell. His younger brother, Henry, who was present at the hunt, departed in haste to seize the treasury at Winchester, aided by the de Clare brothers, Gilbert and Richard, Richard's daughter Adelize was the wife of Walter Tirel. He then travelled to London, where he was hastily crowned within days. The body of the former king was found by a local charcoal maker named Purkis and a few peasants who carried the blood-stained corpse to Winchester in a horse-drawn cart and he was buried under the cathedral tower there. When its badly built tower crashed to the ground the following year, many in that superstitious age perceived it to be the judgement of God upon William Rufus. Whether the shot was accidental or not, Tirel panicked and fled to France.

Over the proceeding centuries, the accusation that one of William's enemies may have had a hand in the event has repeatedly been made, chroniclers of the time point out that Walter Tirel was renowned as a keen bowman, and thus was unlikely to have loosed such a shot. William's brother Henry, who was among the hunting party that day, benefited directly from William's death, shortly thereafter being crowned king. Modern scholars have reopened the question and some have found the assassination theory credible or compelling, but the theory is not universally accepted. Opinion remains divided on whether his death was premeditated murder or merely an unfortunate accident.

The "Rufus Stone" in the New Forest marks the spot where he is said to have been killed. They claim that this is the location of William's death appears to date from no earlier than the seventeenth century when Charles II visited the forest. At that time the most popular account of William's death involved the fatal arrow deflecting off a tree, and during Charles II's visit, he appears to have been shown the tree. The tree in question was cut down and burned during the eighteenth century and later in that century, the Rufus stone was erected. The inscription on the Rufus Stone reads:-

'Here stood the oak tree, on which an arrow shot by Sir Walter Tyrrell at a stag, glanced and struck King William the Second, surnamed Rufus, on the breast, of which he instantly died, on the second day of August, anno 1100. King William the Second, surnamed Rufus, being slain, as before related, was laid in a cart, belonging to one Purkis[e] to take the king's body to Winchester Cathedral on his cart., and drawn from hence, to Winchester, and buried in the Cathedral Church, of that city.'

An exciting new project at Winchester Cathedral plans to examine the remains of William Rufus and several of England's Anglo-Saxon and Danish kings. The contents of six mortuary chests, kept at the cathedral for centuries, contain the remains of 11 or 12 people are to be analysed. These include the purported remains of King Egbert (802-839), the first King of all England, and his son Ethelwulf (839-856), the father of Alfred the Great, King Edred (946-955) the grandson of King Alfred, Edred's nephew King Edwy (955-959), Canute, King of England (1016-1035), Norway and Denmark (d.1035) and his wife Emma of Normandy (also queen consort to the Saxon king Ethelred 'the Redeless'),.

William I the Conqueror PreviousNext Henry I