And Bishop of Bayeux

Odo, half-brother of William the Conqueror was born in the early 1030s, he was the son of Herluin of Conteville and William's mother Arlette, the former mistress of Duke Robert I of Normandy.

Odo's mother, Herleva was the daughter of one Fulbert, a tanner of the town of Falaise, after the birth of their son William, because the gap in their social status rendered marriage impossible, Robert of Normandy had married his mistress to his vassal Herluin Viscount of Conteville, to provide for her. The couple also had a younger son, Robert, count of Mortain and two daughters, Emma, who married Richard LeGoz, viscount of Avranches and a daughter of unknown name, sometimes called Muriel, who married William, Seigneur de la Ferté-Macé. 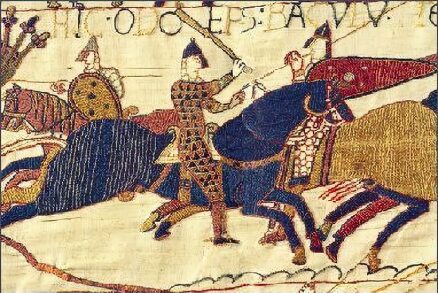 Odo was appointed bishop of Bayeux in 1049 by his half brother, Duke William of Normandy. At this time William was attempting to consolidate his hold on Normandy after his victory over rebels at Val-es-Dunes two years previously.

Odo was heavily involved in the planning of William's invasion of England in 1066 and contributed 100 ships to the expedition, he also took part in the Battle of Hastings. The Bayeux Tapestry, which commemorates the conquest and the famous events of 1066, was probably commissioned by Odo to adorn his cathedral, the tapestry appears to makes the point that as an ordained bishop, he did not actually part in fighting during the battle, but instead encouraged the troops from the rear. The Latin annotation embroidered onto the tapestry above his depiction reads: 'Hic Odo Eps (Episcopus) Baculu(m) Tenens Confortat Pueros', translates as 'Here Odo the Bishop holding a club strengthens the boys'.

In 1067, William created his half-brother Earl of Kent, and on some occasions when William was in Normandy, he served as de facto regent of England. During this time Odo acquired vast estates in England, he held land in twenty-three counties, mostly in the southeast and in East Anglia. At the time of the Domesday Book in 1086, he was the largest landowner in England after the king. His chief residences in England were at Dover, Rochester, Deddington (Oxfordshire) and Snettisham (Norfolk).

Odo was variously described by contemporaries as ambitious, rapacious, greedy, ruthless and destitute of virtue. He forcibly seized lands for his family and associates, leading one chronicler to describe him as a "ravening wolf". In 1076 he stood trial at Penenden Heath in Kent for defrauding the Crown and the Diocese of Canterbury and was forced to return several properties. In 1082, he was imprisoned for having planned a military expedition to Italy. Although his motivations are unclear, as the contemporary evidence is ambiguous, chroniclers recording the event a generation later stated that Odo wished to make himself Pope. Odo was imprisoned for the following five years and his English estates and title were confiscated by William.

When William lay on his deathbed in 1087, persuaded by his other half-brother, Robert, Count of Mortain, he reluctantly agreed to release Odo. Robert Curthose, William's eldest son, was expected to succeed his father as king of England. However, William preferred his third son, William Rufus, who, unlike Robert, had remained loyal to his father. William Rufus was crowned king of England in 1087 and the following year, Odo, Geoffrey of Coutances, Robert of Mortain and Richard Fitz Gilbert led a rebellion in favour of Robert of Normandy. Odo was besieged at Pevensey and then at his base of Rochester, William eventually defeated the rebels when he captured Tonbridge Castle.

With the failure of the rebellion, William Rufus exiled Odo from England, after which he remained in the service of Robert in Normandy. He joined the First Crusade, and accompanied Duke Robert on his journey to the Holy Land, but died en route at Palermo, while visiting his friend, Roger, Count of Sicily, in January or February 1097. He is buried in Palermo Cathedral in Sicily. Although Odo never married he had one son, John of Bayeux, who later became chaplain to his cousin King Henry I.