William Clito was born on 25 October 1102, he was the son of Robert Curthose, Duke of Normandy, eldest son of William the Conqueror and Sybilla of Conversano, daughter of Geoffrey of Brindisi, Count of Conversano. His surname "Clito" was a Latin term equivalent to the Anglo-Saxon "Atheling", and signified "man of royal blood", or prince.

In the aftermath of the defeat and capture of Robert Curthose, Duke of Normandy by his younger brother Henry I of England at the Battle of Tinchebray in September 1106, Robert was taken to Falaise by his captor where Henry had his first meeting with his nephew William Clito, who was then three years old. Robert was returned to England where he was imprisoned in Devizes Castle for twenty years before being moved to Cardiff.

King Henry placed Robert's young son in the care of of Helias of Saint Saens, Count of Arques, a friend of Duke Robert's, who was married to his illegitimate daughter. William remained in his half-sister's and Helias's care until August 1110, when Henry abruptly sent a demand that the child to be handed over to him. Helias' household concealed William and smuggled him to their master, who fled the duchy.

William found refuge with Henry's enemy, the notorious Norman magnate Robert de Bellême, who had extensive estates in the south of the duchy. Bellême was finally captured in 1112, after which William accompanied by Helias sought refuge at the court of the young Count Baldwin VII of Flanders, William's cousin.

A powerful coalition of Norman counts and barons allied with Count Baldwin and rose in rebellion against Henry in 1118. They adopted William's cause and seized much of the north of Normandy. However, Count Baldwin sustained a serious injury at the siege of Arques in September 1118, which led to the collapse of the rebellion.

The following year William Clito's cause was taken up by King Louis VI of France, who launched an invasion of Normandy down the River Seine, and on 20 August 1119 was met in battle by Henry at Brémule, which result in a decisive victory for Henry. The eighteen-year-old William Clito himself had ridden as a new knight amongst King Louis's guard in the battle and barely escaped capture. The next day, King Henry's son, William the Atheling, in a familial gesture, sent him back the horse he had lost in the battle with its valuable accoutrements. The rebellion eventually collapsed, but William continued to find support at the French court. Louis brought his case to the pope's attention in October 1119 at Reims, and forced Henry I to justify his treatment of the exiled boy.

William the Atheling, King Henry's only legitimate son and heir, died on 25 November 1120 in the tragedy of the White Ship, the event transformed William Clito's fortunes. It left him as the only surviving heir in the male line to William the Conqueror and a party of Norman magnates adopted his cause. Henry's deceased son William had been betrothed to Matilda of Anjou, the daughter of Count Fulk V of Anjou. Fulk wanted the return of Matilda's dowry, several castles and towns in Maine, Henry, however, refused to comply. Fulk reacted by betrothing his daughter Sibylla of Anjou to William Clito giving him the county of Maine, between Normandy and Anjou, as her dowry. Henry appealed to canon law, which resulted in the annullment of the marriage on the grounds of consanguinity in August 1124. 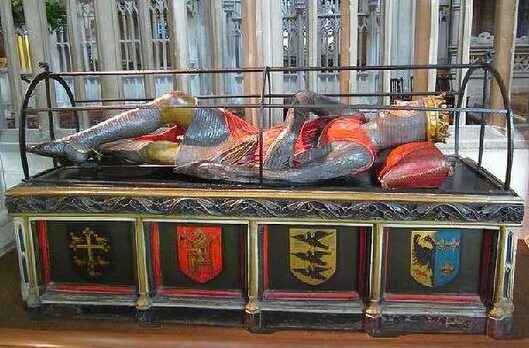 A further serious rebellion of the barons broke out in Normandy in favour of William but was defeated by Henry's intelligence network and the lack of organisation of the leaders, who were defeated by Henry at the battle of Bourgtheroulde in March 1124. King Louis VI was distracted from active intervention as the wily Henry persuaded his son-in-law, Emperor Henry V, married to his daughter Matilda, to threaten Louis from the east.

King Louis VI continued in his efforts to support William and gave him the queen's half-sister Joanna of Montferrat in marriage. In January 1127 Louis granted William the royal estates in the French Vexin as a base to attack Normandy down the Seine. The murder of Count Charles the Good of Flanders on 2 March 1127 provided King Louis with a further opportunity to further William's fortunes. He marched into Flanders at the head of an army and on 30 March persuaded the Flemish barons to accept William as their new ruler. William descended from the Count's of Flanders through his grandmother, Matilda of Flanders, the daughter of Baldwin V, Count of Flanders.

William succeeded in securing most of Flanders by the end of May 1127. But was hindered by Henry's money and the emergence of a rival claimant in Thierry of Alsace. In February 1128 Saint-Omer and Ghent declared against him, followed by Bruges in March. In May 1128 Thierry entered Lille, leaving William controlling little more than the southern fringe of Flanders. William struck back at Bruges and at the battle of Axspoele south of the town on 21 June, William defeated Thierry with his Norman knights and French allies. He was joined by his father-in-law, Duke Godfrey of Brabant, and together their armies besieged Aalst on 12 July, with the probable intention of going on from there to attack Ghent.

During the Siege of Aalst, William was wounded in the arm in a scuffle with a foot soldier. The wound became gangrenous and led to his death at the age of twenty-five on 28 July 1128, he was attended to the end by his faithful brother-in-law, Helias of Saint Saens. William's body was buried at the Abbey of St Bertin in St Omer. He left no children and was survived by his imprisoned father for six years. Robert deeply mourned the loss of his son and died in captivity at Cardiff Castle in his early eighties.