Ethelred II, the son of Edgar the Peaceable by his second marriage to Elfrida, succeeded to England's throne at ten years old and was crowned with due ceremony on 14th April, 978. Queen Elfrida, his mother, was said to have been instrumental in the treacherous murder of Ethelred's half-brother, Edward the Martyr to enable her own son to inherit England's throne. 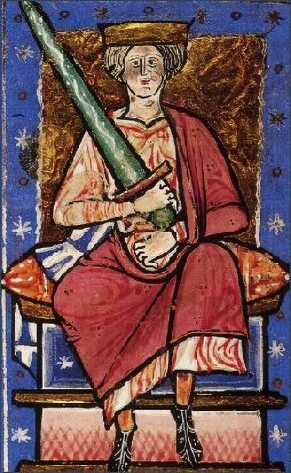 Ethelred grew to manhood with an uneasy and guilty feeling that he should not have been King. Over twenty years later Ethelred was to pay tribute to his murdered half brother, in the grant of a charter to Bradford-on-Avon, which states that the gift is made to " Christ and his saint, that is my half-brother Edward, who though he weltered in his own blood, yet the Lord himself has shown by the multiple signs of his virtues that he is worthy to work miracles in our times."

The Chronicle of Florence of Worcester describes Ethelred as " (A) youth of graceful manners, handsome countenance, and fine person..." The Gunnlaugr Saga of Gunnlaugr the Scald added that he was "a tall, handsome man, elegant in manners, beautiful in countenance, and interesting in his deportment." Ethelred II acquired the epithet 'the Redeless' or 'Unraed' because of his repeated failure to follow wise counsel. This may have been a pun on the name of Ethelred, which in Anglo-Saxon meant noble counsel.

He proved to be a weak and self-indulgent King and followed the ill advice of Edric Streona. The familiar tale of predatory Viking raids was resumed in 981 and the terror-ridden Ethelred foolishly embarked on a policy of paying them large sums of money to go away, this invariably only fed their greed and they repeatedly came back for more. 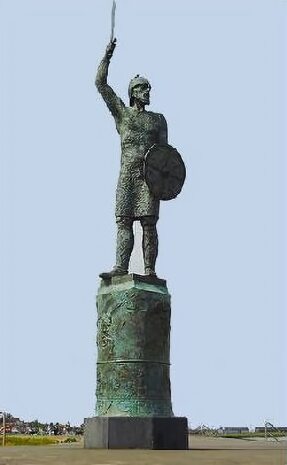 The King's marriage to Emma of Normandy was to have disastrous long term effects for the House of Wessex. Emma arrived in England with an attendant train of Normans. Disliked by the English as foreigners, they succeeded in adding to the King's already waning popularity. Behaving with his customary arrogance, Ethelred succeeded in alienating his new brother-in-law and made an unsuccessful attempt to invade Normandy.

Many of the Saxons struggled valorously and unaided by their King against the fierce Danish incursions. The men of Essex, led by their Ealdorman, Brithnoth, made a valiant stand against the invaders at the Battle of Maldon beside the River Blackwater in Essex, in 991, but were all slain in the battle. One manuscript of the Anglo-Saxon Chronicle said a Norwegian, Olaf Tryggvason, led the Viking forces. The courage and loyalty of Brithnoth and his men were immortalized in Anglo-Saxon verse, in a lost manuscript in the East Saxon dialect which now survives as a fragment in the West Saxon form.

The death of Byrhtnoth was recorded in four versions of the Anglo-Saxon Chronicle. Its Cotton Tiberius manuscript states for the year 991:- 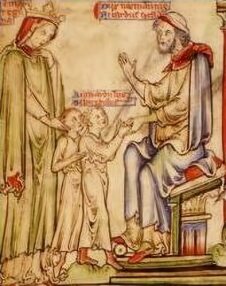 On St. Brice's Day, (18th November) 1002, Ethelred foolishly ordered a great massacre of Danes throughout England in a single day and rivers of blood were shed. One of the victims of this outrage was Gunhilda, the sister of Sweyn Forkbeard, King of Denmark. Danish poetry recorded that Sweyn swore on the bragging cup to be avenged on the cowardly Ethelred.

Making good his threat, England was invaded and conquered by Sweyn in 1013. The ineffectual Ethelred fled to Normandy with his wife, Emma, to seek sanctuary with her relations. Sweyn, whilst engaged in threatening Bury St. Edmunds, died suddenly of apoplexy. The Witan hastily but erroneously recalled Ethelred, causing Canute, the son of Sweyn, to flee. Ethelred was "received with joy". A further year of his disastrous rule taught his long-suffering subjects and the Witan to repent their hasty gesture and Canute returned.

King Ethelred died in London in 1016, while Canute literally hammered at its gates. He was buried at the old Cathedral of St. Paul's, which was destroyed during the Great Fire of London.

His widow Emma of Normandy was later to marry his Danish rival, Canute, finally dying on 6 March 1052, during the reign of their son, Edward the Confessor.

The family of Ethelred II

Ethelred was to be married three times. His first wife, Aelflaed, was the daughter of Thored, Ealdorman of Northumbria. They produced the following issue:-

The king was married for a second time in 991, to Aelgifu, the daughter of

Ealdorman Ethelbert, by whom he had a further issue;-

Disputes also arose with Richard the Good, Duke of Normandy, which was settled by the mediation of the Pope. Peace between the two rulers was established traditionally by the marriage of Ethelred to Duke Richard's sister, Emma of Normandy, who became his third wife in 1002. The marriage produced 2 sons and a daughter:-