At his death, King Edgar the Peaceful had left two sons, the elder of these, Edward, was the child of his first marriage to Æthelflæd, the daughter of Ealdorman Ordgar.

Æthelflæd had been divorced by the king in around 964 to enable King Edgar to marry his second wife, Ælfthryth, a notorious character and the widow of Æthelwold, Ealdorman of East Anglia, her mother was a member of the royal family of Wessex. Elfrida was said to have had an adulterous affair with the King prior to her first husband's death. This second marriage produced two further sons, Edmund and Ethelred, but the elder of these had predeceased his father. 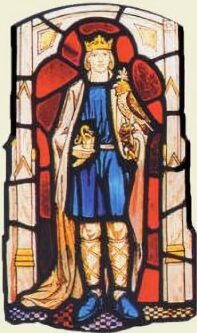 Ælfthryth was crowned Queen on 11th May, 973, at Bath Abbey, which was the first instance of a coronation of a Saxon Queen of England. She was the first consort to be termed Queen since the infamous Judith, daughter of Charles the Bald, in the previous century.

His father's will named his elder son, Edward, (or Eadweard in Old English) as his heir and he had the support of the influential but now aged St. Dunstan, Archbishop of Canterbury. Many of the nobility of the realm, including the powerful Alfere, Ealdorman of Mercia were in favour of the seven-year-old Ethelred succeeding, as they had much to gain from the crown being subjected to a long minority government. The nation was divided over the issue of which of his sons should succeed King Edgar. A meeting of the witan was arranged at Calne, in Wiltshire where the matter was debated at length. Eventually, the influence of Dunstan prevailed and accordingly, Edward was elected King

Edward was crowned by St. Dunstan at Kingston upon Thames in 975, at the age of thirteen. After recording Edward's succession, the Anglo-Saxon Chronicle reports that a comet appeared and that famine and "manifold disturbances" followed.

Despite what had passed, the two brothers, Ethelred and Edward remained very close. Queen Elfrida, however, thoroughly detested her stepson and strongly wished her son to succeed his father. At her instigation, the plot was hatched to murder the young King.