The Battle of Maldon

The Viking attacks on England were ferocious and unremitting. A marauding Viking army under the command of the Norwegian Olaf Tryggvason reached England in 991 and pillaged Folkestone, Sandwich and Ipswich before advancing on Maldon, on the southern shore of the Blackwater Estuary in Essex. They sailed up the River Blackwater (then called the Panta), to Northey Island, a small island in the river. 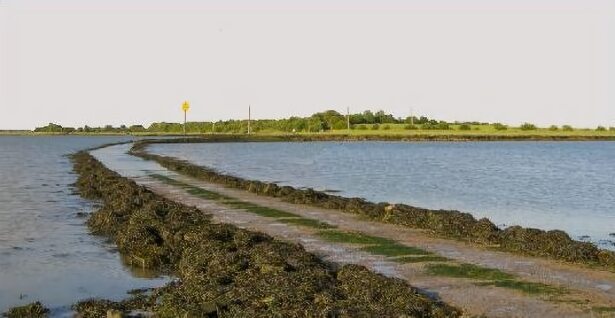 Here they were met by an army of East Saxons led by Ealdorman Byrhtnoth. Then aged around sixty, with "swan-white hair", he was reputed to have stood well over six foot in height. Brythnoth was the husband of Ælfflæd, sister of Dowager Queen Æthelflæd of Damerham, and a kinsman of King Edgar by marriage.

At low tide, the River Blackwater at this point leaves a dry causeway from Northey Island to the shore, but since it was high tide, a shouted negotiation ensued, Byrhtnoth refused to pay the Vikings to leave and determined to meet them in battle, telling their leader Olaf "We will pay you with spear tips and sword blades." 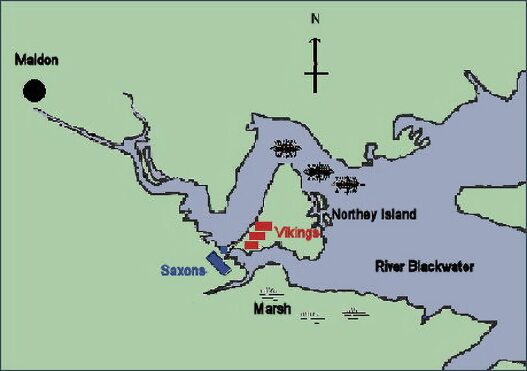 As the tide receeded, Byrhtnoth addressed his army in a moving and patriotic speech, telling them to "send steed away and stride forwards".

As the tide ebbed further, the Vikings attempted to cross the causeway but were held back by a small band of Saxons. Three of Byrhtnoth's finest warriors, his kinsman Wulfstan and two other Saxons Aelfere and Maccus, held the head of the causeway denying the Viking's passage.

The Vikings withdrew and asked Byrhtnoth for permission to cross for a fair fight- "When the pirates perceived and saw that they had been met by bitter bridge wardens, the Viking shipmen began to disassemble, asked for permission to make their approach, to fare over the ford and take their troops. It was then that the eaorl disdainfully granted too much ground to the hostile host.'

Byrhtnoth knew he had to bring the enemy to battle and thoroughly defeat them if he was to protect East Anglia from further incursions, and therefore allowed the Vikings to cross to the mainland.

The Saxons, arrayed in shield wall formation, awaited the Viking advance on a slope in a nearby wheatfield . After a hail of arrows and spears were exchanged, the two armies clashed in bitter hand to hand fighting. It proved to be a bloody encounter, with heavy casualties on both sides. A Saxon named Godric fled on Byrhtnoth's horse, he was followed by his two brothers Godwine and Godwig. Many of the Saxons, recognizing the horse and assuming that its rider was Byrhtnoth, began to also flee. 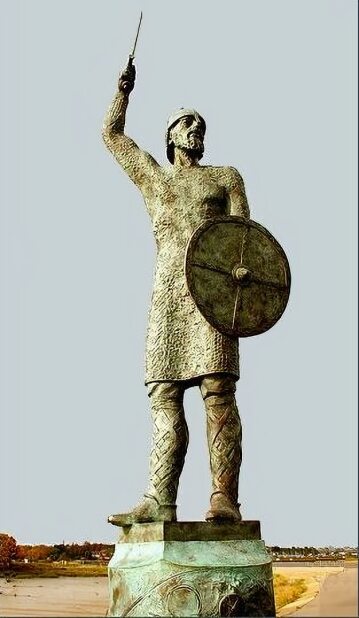 The depleted Saxon army began to be overcome by the Vikings and the valiant Byrhtnoth himself was slain in the fighting. It was said that it took three men to kill him, one of them almost severing Byrhtnoth's arm.

He was wounded by a spear which he shattered with his shield edge and attacked his assailant before being wounded in the side by another spear, Wulmaer the youthful, son of Wulfstan, pulled out the spear and now severely wounded, Byrhtnoth managed to rally his followers biding them to "go forward and bear them well". He was then attacked by several Vikings and badly wounded in the arm, dropped his sword and was hacked down.

On realising their leader was dead, most of the Saxon army fled into the woods behind the battlefield. Brihtnoth's retainers fought to avenge his death, killing large numbers of the enemy before they too were slain. A Saxon known as Eadweard the Long is said to have singlehandedly shattered the Viking shield wall and killed several before he too was cut down.

Byrhtnoth's body was discovered after the battle, his head was missing, but his gold-hilted sword remained by his body. He was buried at Ely Cathedral, alongside Archbishop Wulfstan. In life, he had been a patron of the cathedral. His widow Ælfflæd later gave Ely Cathedral a tapestry celebrating his deeds.

In the aftermath of the battle, the ineffectual English king, Ethelred the Redeless attempted to buy peace with a payment of £10,000 to the Vikings.

A surviving 325-line fragment of Old English poetry describes the events of the battle. The poem is incomplete, its beginning and ending both having been lost. One of the finest battle poems in English literary history, it features vivid and dramatic combat scenes and strongly expresses the Anglo-Saxon ethos of loyalty to a leader. The poem enshrines the memories of the men who fought and lost their lives in the battle protecting their homeland and countrymen and is embellished with many speeches attributed to the warriors, especially Byrhtnoth, who in the poem embodies many of the virtues that were admired by Anglo-Saxons, and is compared often to the hero Beowulf. The complete poem was first transmitted orally, then written down in a lost manuscript in the East Saxon dialect and now survives as a fragment in the West Saxon form, possibly that of a scribe active at the Monastery of Worcester late in the eleventh century.

A memorial window to Byrhtnoth may be seen in St Mary's church at Maldon, while a statue of the ealdorman stands outside the church. A nine feet high bronze statue of the Saxon leader by sculptor John Doubleday was erected in October 2006 on the shoreline at Maldon, looking down the river estuary towards the nearby battle site.