Macbeth (Gaelic- MacBheatha mac Fhionnlaigh) was the son of Finlech MacRory, Mormaer of Moray and Donada, the daughter of Malcolm II and was born around 1005. Malcolm's elder daughter, Bethoc had been the mother of King Duncan, making him Macbeth's cousin. Macbeth, nicknamed Rí Deircc, meaning "the Red King" married Gruoch, who herself had a claim to the Scottish crown being the daughter of Beoedhe, the son of Kenneth III. Gruoch had been previously married to Gilla Coemgain, by whom she had a son, Lulach. 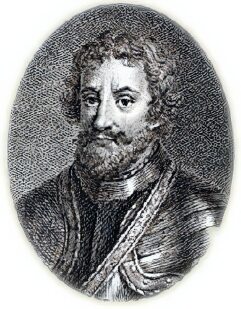 At the age of seven, Macbeth was sent to a monastery to receive an education. Macbeth's father Finlech MacRory was killed by his cousins, Malcolm and Gillecomgain, when he was fifteen years of age, possibly for being too close to Malcolm II, king of Scotland. His cousin, Gillecomgain, was killed by order of Malcolm II for his killing of Findlaech. Macbeth was subsequently elected as mormaer of Moray, and married Gillecomgain's widow, Grouch, and adopted her son, Lulach. The marriage strengthened his claim to the throne. Macbeth was determined, resolute and ambitious. He defeated Duncan in battle at Elgin or murdered him shortly after the battle and usurped the throne of Scotland on 14th August 1040. He held the throne for seventeen years. Malcolm, the son of Duncan took refuge in Strathclyde. According to the Anglo-Saxon Chronicle Macbeth was one of three Scottish Kings who submitted to King Canute.

Dunsinane Hill, where Macbeth met his death in battle 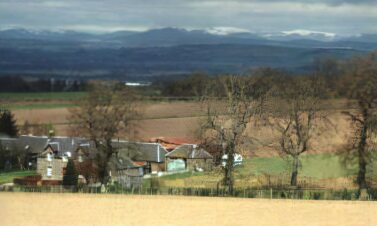 The Norsemen had for a long time been in possession of not only the Shetlands and the Orkneys, but also of the north and west of the mainland. Their leader was Thorfinn, who like Duncan, was a grandson of Malcolm II. Macbeth attempted to compel him to pay tribute to him as King, but Thorfinn refused. Repeated attempts to conquer him failed to achieve the desired result. The war was carried into Moray by Thorfinn, who ravaged the country as far as Fife, forcing Macbeth to come to terms with him. Macbeth's erstwhile enemy later supported him in resisting an attack made by Malcolm, the son of Duncan.

Shakespeare's Macbeth bears little resemblance to the real eleventh century Scottish king. The reign of Macbeth was noted as a time of prosperity in Scotland, allowing him to go on pilgrimage to Rome where he was said to have distributed money to the poor.

The elder of Duncan's sons, Malcolm, enlisted the aid of Edward the Confessor, King of England and Siward, the Danish Earl of Northumbria. He invaded Scotland in 1054 and was met in battle by Macbeth, but fell short of dislodging him. A fierce battle was fought in which the Annals of Ulster report 3,000 Scots and 1,500 English dead, one of Siward's sons and a son-in-law were among the dead.

Undeterred, Malcolm led a further invasion in 1057. Macbeth was defeated and mortally wounded by the future Malcolm at a battle fought on the north side of the Mounth in 1057, after retreating with his men over the Cairnamounth Pass to take his last stand at the battle at Lumphanan in Aberdeenshire, on 15th August 1057, where he was either found amongst the dead on the battlefield by Malcolm or captured and summarily executed immediately after the skirmish... Macbeth was buried on the island of Iona and Malcolm took the throne, reigning as Malcolm III and re-establishing the House of Dunkeld.