Malcolm III, surnamed 'Canmore'. which translates from Gaelic as ' big head.' was born in 1031, he was the eldest son of the ill-fated King Duncan. When his father was killed in battle at Bothganowan by Macbeth, who then usurped Scotland's throne, Malcolm escaped south and took refuge at the court of the English King Hardicanute. He remained an exile in England until in 1053. Hardicanute's successor, the devout Saxon king Edward the Confessor, agreed to render assistance to regain Malcolm's lost throne. Malcolm marched into Scotland with Siward, Earl of Northumbria. He became King after slaying Macbeth at Lumphanan in Mar and was crowned at Scone Abbey on 25th April, 1058. 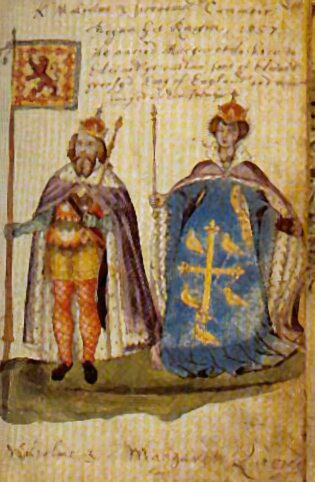 The ancient Saxon House of Wessex had been displaced by the Norman invader William the Conqueror. Margaret Atheling, a dispossessed princess of the royal Saxon line, arrived in Scotland in 1068, where she sought refuge with her brother, Edgar Atheling. Margaret was said to be a beautiful and highly pious woman and Malcolm was besotted by her. Although preferring a religious life, she eventually consented to become the wife of the King of Scots.

Disputes concerning the boundaries of Cumbria and Lothian arose with the new King of England, the formidable William the Conqueror. The Conqueror, not a man to do things by halves, marched north to the Tay, where his large army was met by a great English fleet. Malcolm responded with alacrity, he agreed to meet William for talks at Abernethy. he then paid homage to the English King and agreed to surrender his eldest son by his first marriage, Duncan, as security for his future obedience.

The new Queen of Scots held considerable influence with her indulgent husband. She was highly religious and humane and exceedingly generous to the poor. She frequently washed the feet of beggars and performed many similar acts of charity for which she gained the lasting respect of her subjects.

The Queen attempted to get women admitted into places of worship, a curious prohibition that then existed in the Gaelic Church. She also campaigned to forbid men to marry their step mothers. Margaret is said to have secured the observance of the Sabbath by banning all work on Sundays and re-introduced the practice of saying grace after meals to Scotland.

The Conqueror's successor, William Rufus, after driving the Scots north of the Solway, invited their King for talks. On the Scottish King's arrival at Gloucester, William delivered a stinging snub to Malcolm by refusing to receive him. Enraged at the insult to his dignity, Malcolm returned to Scotland and retaliated by riding with an army into Northumbria.

On 13th November, 1093, Malcolm was killed at the The Battle of Alnwick, his eldest son by Margaret, Edward, was also slain. The throne of Scotland was seized by Malcolm's brother Donald Bane.

The disastrous news was carried to Margaret at Edinburgh Castle, the Queen was already mortally ill and the castle was under siege by her brother-in-law. She died three days later and was buried at Dunfermline Abbey. Her descendant, King Alexander II, petitioned Pope Innocent IV to canonize his devout ancestress. By Papal Bull of 1249 she was formally declared a saint in the Catholic church.

On 19th June, 1250, her body and that of her spouse, Malcolm III, were exhumed and removed to a magnificent shrine. 19th June was thereafter celebrated in Scotland as the feast of St. Margaret. Her remains, along with those of her husband, were not allowed to rest in peace however. In 1560 St. Margaret's shrine was desecrated by Scots Calvinist iconoclasts. Mary, Queen of Scots had St. Margaret's head removed as a reliquary to Edinburgh Castle, as she hoped to call on the assistance of the saint in childbirth.

In 1597 Margaret's earthly peregrinations continued, when her head was taken home by a private gentleman, it then embarked upon further journeyings, arriving in Antwerp and finally reaching the Scot's College at Douai, France. It disappeared completely during the French Revolution. Phillip II of Spain had the remains of Margaret and Malcolm Canmore translated to a shrine at El Escorial, seat of the Catholic Kings of Spain.

The Family of Malcolm III

Malcolm was married firstly to Ingeborg of Halland, widow or daughter of the Earl of Orkney, it remains unsure which. The marriage produced three sons:-

After the death of Ingeborg, he took as his second wife Margaret, the niece of Edward the Confessor, of the Atheling Royal House. They had issue:-