Holyrood Abbey in Edinburgh was founded in 1128, by the pious King David I Scotland (1124-53). Its name derives from a relic which was granted to the abbey, which had once belonged to the Saxon born St. Margaret, wife of Malcolm Canmore and David's mother. 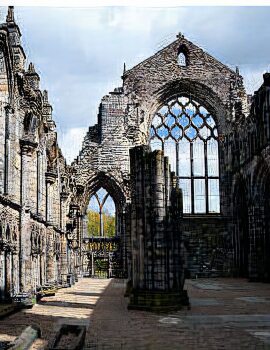 Holyrood became a favoured royal residence of the Stewart kings of Scotland. King James IV (1488-1513) replaced the Medieval royal apartments for himself and his bride, Margaret Tudor, the sister of Henry VIII. Only a small part of the gatehouse of these buildings survives to the present. His son and successor, James V (1513-42) embarked upon an extensive building programme at Holyrood.

Holyrood became the stage on which many of the famous events in the turbulent and tragic reign of his ill-starred daughter, Mary, Queen of Scots were played out. The palace was attacked by the English armies of Henry VIII, when he attempted to gain Mary's hand in marriage for his son, Edward VI, caustically referred to by the Scots as "the rough wooing". Many years later the Queen embarked on her troubled and disastrous second marriage to her cousin Henry Stuart, Lord Darnley. The ceremony took place at Holyrood. 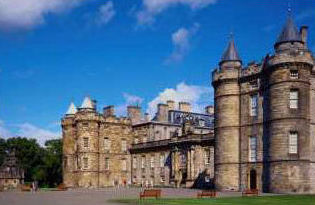 Mary's son, James VI and I continued to use Holyrood House as a royal residence. However, after James inherited the English crown on the death of the last of the Tudors, Elizabeth I in 1603, making him the monarch of both kingdoms, he took up residence in his new southern kingdom, leading to Holyrood House to be used but seldomly.

At the restoration of the monarchy in 1660, Holyrood became the official residence of the monarch whilst in Scotland. Charles II embarked on a major programme of rebuilding and improvements to the building.

Bonnie Prince Charlie stayed at Holyrood during the early stages of the 1745 rebellion, in which he attempted to regain the thrones of Scotland and England for his father, James Francis Edward Stuart, the Old Pretender. 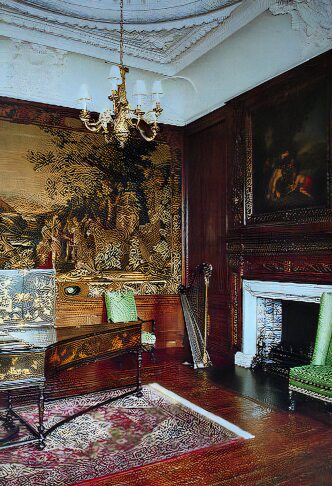 Thereafter Holyrood was largely neglected by the Hanoverian monarchs, who cared very little for Scotland, until the reign of George IV, who in 1822 made a State visit to Scotland, encouraged by the Scottish author Sir Walter Scott, of whose books he was an avid reader.After George's visit an extensive programme of improvements were carried out.

The royal apartments in the palace, built in the reign of Charles II, consist of six principal rooms. They are entered via the Great Stair, the Throne Room, the largest room in the Great Apartment, which was used as the Drawing Room during the visit of George IV. The walls are hung with royal portraits including four by Peter Lely, of Charles II and Catherine of Braganza, his much neglected Portuguese Queen and James II and his Italian second wife, Mary of Modena. 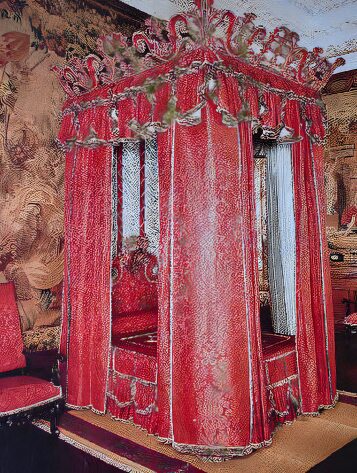 The royal dining room is of a neo-classical design, with ionic columns. Royal portraits hanging in the room include two pictures of the exiled Stuart princes, Charles Edward and Henry, Cardinal York, fated to be the last of the ancient Scottish Stuart dynasty.

The attractive Morning Drawing Room looks out onto the garden. The elaborate plaster ceiling is decorated with cherubs holding the initials of Charles II and the royal honours of Scotland. The room also boasts an overmantel painting of Cupid and psyche by Jacob de Wet.

The magnificent King's Bedchamber is dominated by its elaborate four poster bed, dating from the late seventeenth century, it has been refurbished in its original red damask fabric.

The huge Great Gallery measures 145 feet long and was designed to link the apartments of the King and Queen. Charles II commissioned a series of 110 portraits of Scottish monarchs by Jacob de Wet, 89 of which decorate the gallery's walls. The room is still used by the Queen for banquets, receptions and musical evenings when she is in residence.

The Mary, Queen of Scots Chambers vividly evoke memories of the time the unfortunate Queen spent at Holyrood. It was here that her Italian secretary, David Rizzio was viciously stabbed by Lord Ruthven while trying to clutch at the Queen's skirts for protection. In a horrific scene played out within its walls, her husband, Lord Darnley held back the screaming and highly distressed Queen. The timber ceiling dates from the time, it was later decorated by her son, James VI and I, with the initials of himself and his mother.

One of the most fascinating exhibits at Holyrood House is the Darnley Jewel, an enamel locket set with precious stones which Lady Margaret Douglas, Countess of Lennox and Mary's mother-in-law made in the 1570s to commemorate the deaths of her husband and son. Her son, Henry Stuart, Lord Darnley was murdered in 1566, probably by James Hepburn, Earl of Bothwell, who was later to become Mary's third husband. While her husband, Matthew Stuart, Earl of Lennox, was killed whilst acting as regent during the minority of the couple's grandson, King James VI and I.

Today the palace stands at the end of Edinburgh's Royal Mile. The royal family often stay at Holyrood when in Scotland and hold investitures in the palace to recognise Scottish achievement.

The Lennox Jewel, otherwise known as the Darnley Locket, a heart shaped locket set with precious stones, gold, enamel, Burmese rubies, Indian emerald and cobalt-blue glass was made in 1570 for Lady Margaret Douglas, Countess of Lennox, the mother of Lord Darnley to commemorate her husband Matthew Stewart, Earl of Lennox and Regent of Scotland for his grandson James VI, Lennox fell in battle in 1571.

The Lennox Jewel was formerly in the collection of art historian and antiquarian Horace Walpole but was purchased by Queen Victoria in 1842. The jewel is now on display to the public at Holyrood House in Edinburgh.