The Battle of Northampton

Richard, Duke of York and the main Yorkist leaders fled into exile after escaping from a Lancastrian army at Ludford Bridge in October 1459. The powerful Richard Neville, Earl of Warwick, along with his father Richard Neville, Earl of Salisbury and York's eldest son Edward, Earl of March, (later King Edward IV) arived in Calais on 2 November 1459, where they joined Warwick's uncle Lord Fauconberg. Meanwhile the Duke of York and his second son, the sixteen year old Edmund, Earl of Rutland, withdrew to Dublin in Ireland. A Bill of Attainder was then passed by King Henry VI against the main Yorkist leaders. 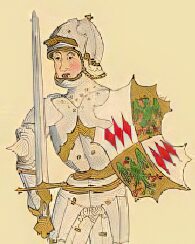 The Lancastrian James Butler, 5th Earl of Ormond replaced York as Lieutenant of Ireland, while the Henry Beaufort, 3rd Duke of Somerset was appointed to Warwick's position as Captain of Calais. The Irish however, refused to dislodge York and the gates of Calais were closed on the Duke of Somerset.

Somerset was provided with an army to take Calais from Warwick by force, and construction of a fleet was commenced at Sandwich in Kent. In January and May 1460, Warwick carried out a daring raid on Sandwich and stole the ships, taking them back with him to Calais.

In June 1460, a Yorkist force under Lord Fauconberg, Sir John Wenlock and John Dynham seized, capturing both troops and armaments. Osbert Mundford leader of the Lancastrian troops stationed at Sandwich was taken to Rysbank tower and promptly beheaded. Warwick then retired to Calais leaving Fauconberg in control of Sandwich with a small force of Yorkists.

Warwick, Salisbury, Edward and Fauconberg landed at Sandwich with a force of around 2,000 men on 26 June 1460. Before landing they had issued a manifesto, underlining their many grievances which included the weak governance of the country, the loss of France, the murder of Humphrey Duke of Gloucester, the exclusion of the king's relatives from the council, and their oppression by the favourites of the queen. Gathering support as they travelled, Warwick and Salisbury, joined by the men of Kent under Archbishop Bourchier and Lord Cobham, the Yorkists entered London on 2 July with an army numbering approximately 10,000 men. After laying siege to attempt to gain the Tower of London, Warwick left a small force in London under his father Salisbury to blockade the Tower, which yet remained in the control of the Lancastrians, he then marched north to confront the royal army before the king had time to muster his full strength.

Plan of the Battle of Northampton 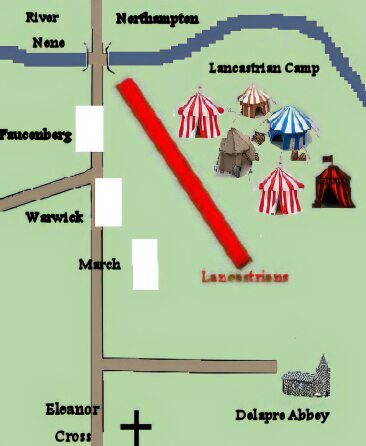 King Henry VI and his forces moved from Coventry and adopted a defensive position at Northampton, in the grounds of Delapré Abbey, with their backs to the River Nene, the Lancastrian troops constructed a water-filled ditch in front of them which was topped with deadly stakes. The royal army consisted of around 5,000 men and was commanded by the king's cousin, Humphrey Stafford, 1st Duke of Buckingham. With him were Thomas Percy, 1st Baron Egremont and John Lord Beaumont, both bitter enemies of the Neville clan.

The Earl of Warwick sent a delegation to the King, to which the Lancastrian Duke of Buckingham, sent the reply "The Earl of Warwick shall not come to the King's presence and if he comes he shall die." Having formed battle positions, Warwick sent a further message stating "At 2 o'clock I will speak with the King or I will die". Attempts by the Archbishop of Canterbury to negotiate proved futile. The Queen Eleanor Cross, from which the Archbishop later observed the battle, still stands to the southwest of the battlefield. 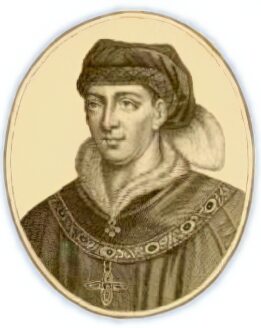 Warwick formed up his force in the three divisions, with himself commanding the centre, the Earl of March leading the van and Fauconberg the rear, before advancing he issued orders to spare the commons, and slay none but the lords and knights. At two o'clock the Yorkists advanced in columns, to be met with a deadly hail of arrows, the Lancastrians were placed at a disadvantage when the driving rain that afternoon rendered their cannon unable to fire. The Lancastrians were further hindered by treachery in their ranks, as Warwick approached the Lancastrian left flank, Lord Grey of Ruthin ordered his men to lay down their weapons and offer the Yorkists no resistance. They were therefore able to enter the camp beyond the ditch with ease.

Lord Grey had previously sent a message to Edward, Earl of March promising to change sides if the Yorkists would aid him in his property dispute with Lord Fanhope. The battle was over in a mere thirty minutes. The Lancastrians were unable to manoeuvre inside the fortifications and fled the field before the attacking Yorkists. Many were drowned in the rain-swollen River Nene.

The Lancastrian lords, the Duke of Buckingham, the Earl of Shrewsbury, Lord Egremont, Lord Beaumont and Sir William Lucy were all slain attempting to protect the king from the Yorkists closing in on his tent. King Henry VI was captured by an archer, Henry Mountfort. He was escorted to Delapre abbey by Warwick, March and Fauconberg, then Northampton, and was finally taken to London by the victorious Yorkists.

Soon afterwards the Duke of York returned from Ireland and laid formal claim to the throne. When asked why he had not previously done so, he responded that "though right for a time lies silent, yet it rotteth not, nor shall it perish." A compromise was agreed on, whereupon Henry VI was to keep the throne for the rest of his life but the succession was to go to York and his heirs. No one for a moment expected that the spirited Margaret would accept the disinheriting of her son and this proved to be the case.

The Battle of Wakefield PreviousNext The Second Battle of St. Albans